On Greek isle of Rhodes, Jews return to celebrate ancient community all but wiped out 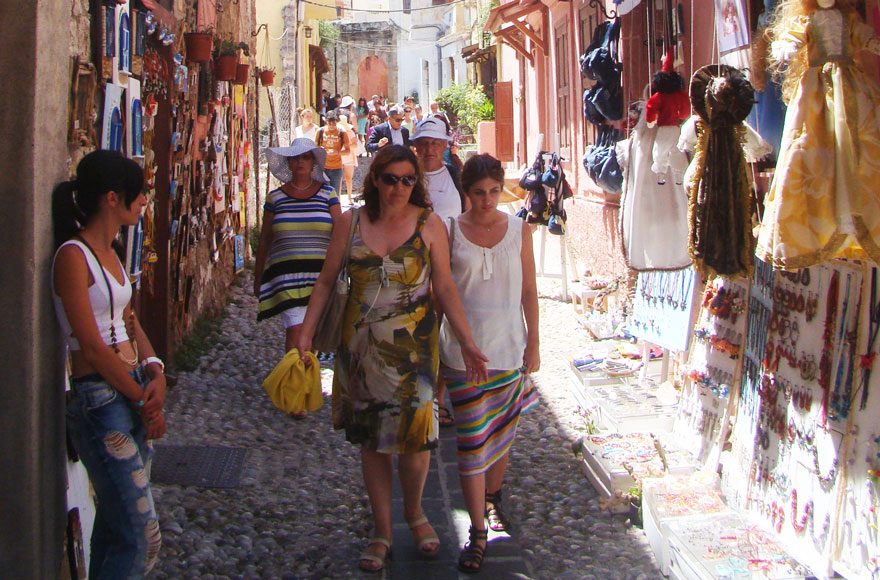 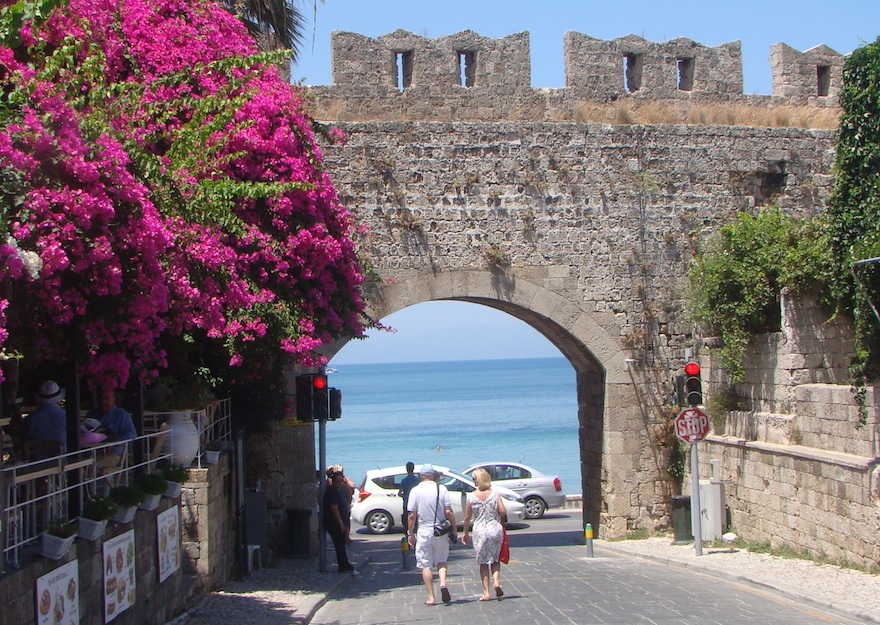 Tourists walking through the old city walls of Rhodes near the Square of Jewish Martyrs. (Gavin Rabinowitz)

RHODES, Greece (JTA) – Each summer, tens of thousands of tourists descend on Rhodes, Greece’s easternmost island. They are drawn by the sandy beaches, the turquoise waters of the Aegean Sea, the casino resorts and the prospect of exploring the medieval walled old city that was built by Crusader knights. On a clear day, you can see Turkey in the distance.

But for a few, it’s an annual pilgrimage, a homecoming that commemorates the Jews of this Mediterranean island who lived here for 2,000 years — up until July 23, 1944, when the last among them were deported to Auschwitz. This annual gathering, including Holocaust survivors and descendants, is a testament to the success of efforts to keep alive the spirit and identity of the community.

“What is it about Rhodes that is so attractive that we were driven to create the same community wherever we went — to Congo, in Rhodesia, in Seattle and California? What is it that was so special, that unites all these people?” said 91-year-old Stella Levi, who survived Auschwitz and later settled in New York. “I think it was because we were all one family, and that’s what we are trying to pass on to the new generation.”

That bond has allowed the “Rhodeslis,” or descendants of the Jews of Rhodes, to keep alive contacts between far-flung communities and return to the island for family functions like bar mitzvahs and weddings. And in recent years, dozens of Rhodeslis families visit each year for cultural events and memorial services that mark the anniversary of the Nazi deportation. 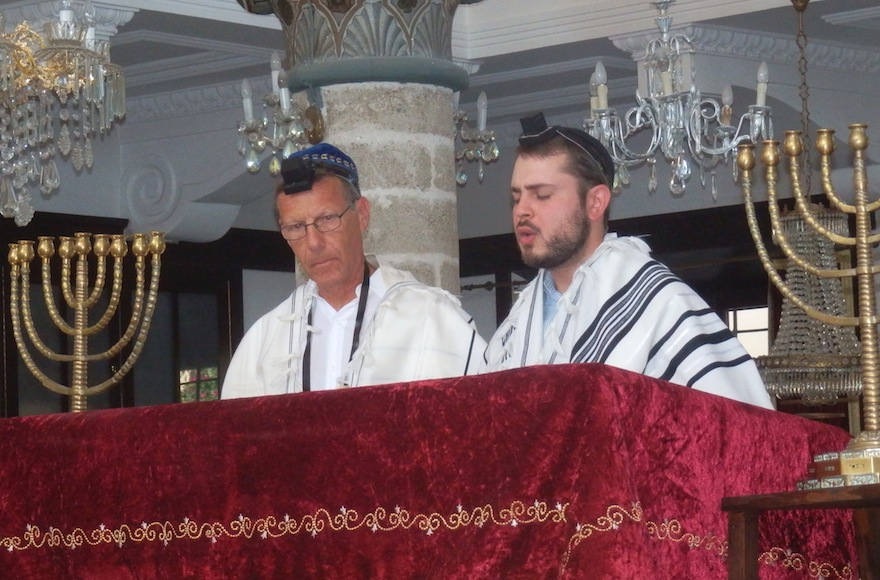 This year’s event saw more than 500 people attend a concert of Ladino, Yiddish and Hebrew songs performed in the courtyard of the Palace of the Grand Master of the Knights of Rhodes, an imposing Gothic fortress.

“What my father transmitted to me and my sister was the atmosphere that was here, the happiness of being together, living with doors that were open, with hearts that were open,” said Giovanna Coen, whose father was the oldest member of the community to survive the death camps. Coen, who now lives in Rome, has been bringing her family back to Rhodes since 1984 to explore their roots and meet other descendants.

Her father was born into a vibrant cosmopolitan Jewish community of traders and craftsmen that lived in the Jewish quarter of Rhodes, La Juderia — a warren of narrow cobblestone alleys behind the great stone fortress walls and moat of the old port city.

Rhodes is both the name of the island and its main city, where the Jewish quarter is located.

The Jewish community of Rhodes traces its history back to the second century B.C.E., but most of the community members were descendants of the Sephardi Jews expelled from Spain and spoke Judeo-Spanish, or Ladino, in their daily lives. The community largely thrived under Ottoman rule, reaching a peak in the 1920s with some 4,000 Jews, a quarter of the total town population. It had four synagogues, a Jewish school and a yeshiva.

But the community fell into a decline, coinciding with the island’s transfer to Italian rule in 1912. Many emigrated to find better economic opportunities, with most going to the United States and to what was then the Belgian Congo (now the Democratic Republic of Congo) and Rhodesia (now Zimbabwe) in Africa. Emigration increased after the Italian dictator Benito Mussolini passed a series of laws in 1938 that curtailed Jews’ civil rights and barred them from public office and higher education. By the time German forces occupied Rhodes in September 1943, fewer than 2,000 Jews remained. 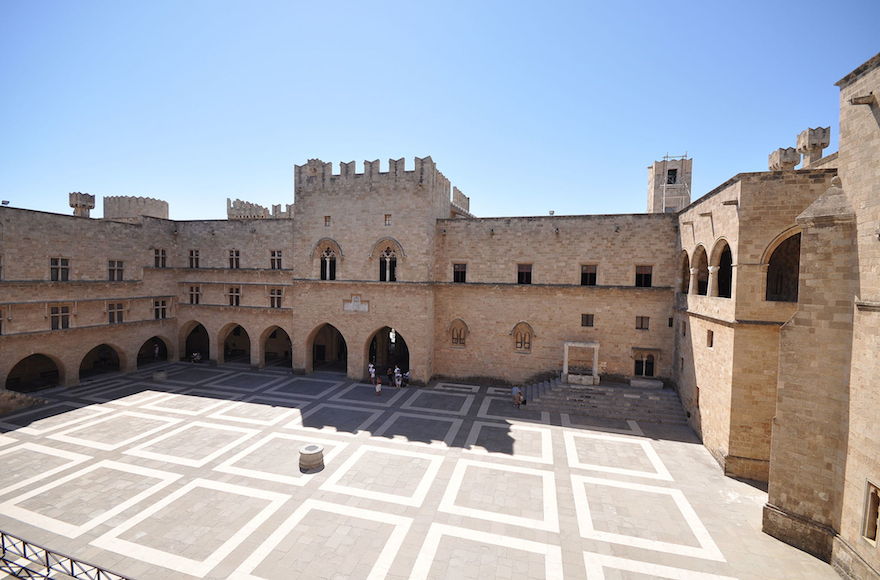 They had survived for more than a year after the rest of the Jews of Greece had been deported to their deaths, although several were killed and La Juderia was badly damaged in British bombings that targeted the island’s port. As the end of World War II approached, the Germans rounded up the Jews from Rhodes and the nearby island of Kos.

“We never thought the Germans would come to this godforsaken island in the Aegean to take 1,700 mostly old people for the simple reason to exterminate every last one of the Jewish population in Europe,” Levi said.

In what became known as “the longest journey,” the Jews of Rhodes spent nine days on a cargo boat to Athens, followed by 13 days in cattle wagons to Auschwitz. That was the last group of Greek Jews sent to the camps.

Only 151 people survived; none of them returned to live in Rhodes. An attempt in 1956 to restart the community brought 25 Jewish families from mainland Greece, said Carmen Cohen, the current director of the community, who was one of those who came. Only five of those families remain on the island today.

Greece now has some 5,000 Jews, most of them living in Athens. But for many returning Rhodeslis, the connection to Greece is tenuous because the island only returned to Greek rule after the war, when the community had already been destroyed.

“I really feel that next year, some of the [commemoration] speeches should be in Ladino and not Greek,” Levi said.

The worldwide community of Rhodeslis also received a boost from Bella Angel Restis, who has been president of the community in Rhodes since 2000. Born in the Belgian Congo to a wealthy Jewish family from Rhodes, in 2004 she oversaw a major renovation of the Kahal Shalom Synagogue, which dates back to 1577, and the opening of an adjacent museum. Restis also helped persuade the municipality to allow the establishment of a Holocaust memorial in the Square of Jewish Martyrs in the heart of the old town.

READ: Greek Jews are small in number, but heirs to a rich tradition

“[Restis] has that personal connection that manages to get the people back to Rhodes,” Cohen said after a wreath-laying ceremony at the monument, where he was surrounded by curious sunburned European tourists and local Greeks hawking souvenirs and souvlaki, or meat skewers.

Descendants of the Jews of Rhodes walking past tourists in the alleyways of Rhodes’ old town on their way to a memorial service for Rhodes Jews who died in the Holocaust. (Gavin Rabinowitz)

For many descendants, being able to come back to walk the stone, bougainvillea-dotted alleys and pray in the synagogue has been a powerful touchstone, none more so than for Giuseppe Giannotti, 61.

His mother, Ester, survived Auschwitz. She eventually married an Italian soldier to whom she had been engaged before the war, settling in Genoa, Italy. She was so traumatized, she forbade her four children from telling anyone they were Jewish, fearing they would be killed.

“When I was 40, I told my mother that it’s not the war anymore. I want to say that I’m Jewish,” said Giannotti, who then began a process of reconnecting with his roots.

“Last year I did my bar mitzvah here with all these people,” he said, sitting in the synagogue with its unique black-and-white cobblestone floor. “… I was 60 years old and everyone was crying, the son of a survivor in the synagogue of his ancestors.”