Hillel president sorry for backing out of J Street conference 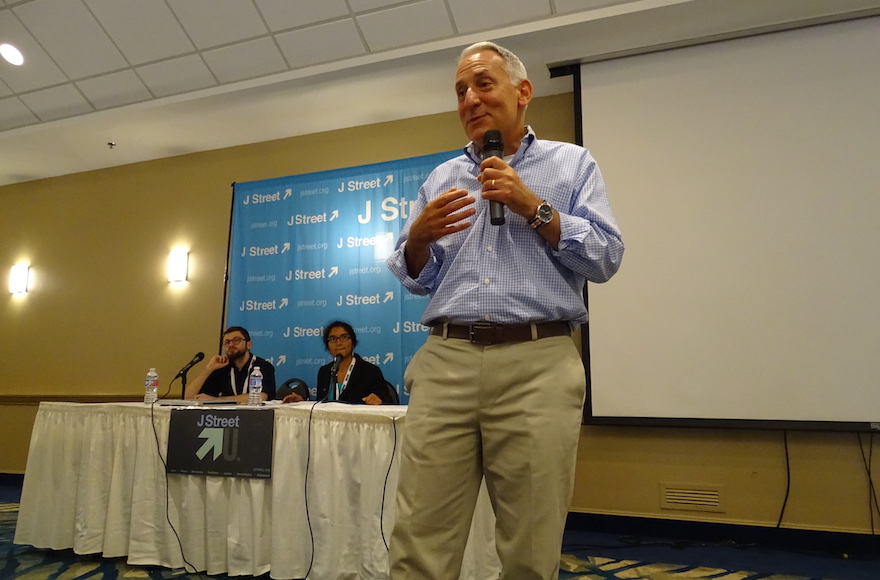 (Washington Jewish Week via JTA) – Eric Fingerhut, the president of Hillel International, apologized to J Street U student leaders for any hurt he caused when he backed out as a speaker at the group’s conference in March.

“There’s no question that the political dynamics are fraught, and I know we had that conversation,” Fingerhut said while gesturing to Benjy Cannon, the immediate past president of J Street U, the campus affiliate of the liberal pro-Israel lobbying group. “But there’s nobody responsible for any hurt that occurred in March except me.”

Fingerhut said he “took a step back” from the conference, which he reportedly pulled out of under donor pressure, when it became clear that his speaking during the J Street U conference could be viewed as an endorsement of the group’s policies.

“This is about engaging students,” Fingerhut said. “It’s not about endorsing an organization’s political agenda because Hillel doesn’t do that.”

Fingerhut talked mainly about inclusion in Hillel and the growing anti-Semitism frequently attached to the Boycott, Divestment and Sanctions efforts on campus posing a serious threat, but the student activists tried to steer the conversation toward Israel’s occupation, the two-state solution with the Palestinians and their feeling of marginalization by the wider Jewish community.

Several students said the Jewish community’s unwillingness to address the occupation and Palestinian suffering made it difficult for pro-Israel students to combat BDS on campus.

Zoe Goldblum, a sophomore at Stanford University and the newly elected vice president for the Northwest region of J Street U, detailed to Fingerhut how the BDS campaign on her campus turned into a referendum on race, oppression and occupation. She described a meeting in which pro-divestment students, mostly people of color, sat on one side of the room wearing red wristbands and kaffiyehs, while on the other side, wearing blue and white T-shirts, were the mostly white pro-Israel students.

It set a dynamic, she said, of “you can either support divestment and support anti-oppression, anti-occupation, or you can be a pro-Israel student.” For students who oppose oppression and occupation while supporting Israel, she said, the choice was “wrenching.”

“Mr. Fingerhut, I am telling you this story because I and students like me honestly do not know what to do when we go back to school in a few weeks,” Goldblum said. “As the president of Hillel International, what do you think I should do?”

Fingerhut responded that Hillel is proactively building coalitions and mending frayed relationships with students of color and with social justice movements.

On the influence of donors and stakeholders in the Jewish community, Boston University’s Solomon Tarlin related that following his Hillel student board’s decision to include the group, major donors began haranguing the Hillel director. When Tarlin asked if others had similar experiences, more than a dozen hands were raised.

“How can we work together to counteract the outside forces that are restricting our ability to fight for Israel’s future as a Jewish and democratic state?” Tarlin asked.

Hillel’s responsibility, he continued, is to make sure all pro-Israel student groups have a home at Hillel so students can decide for themselves what position to take.