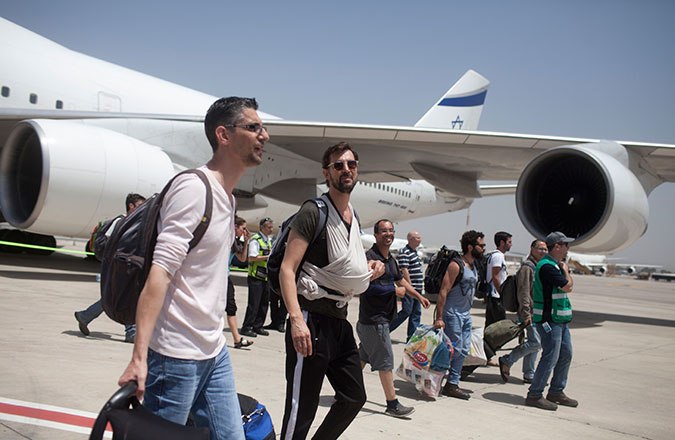 Israeli travelers with their newborn babies from surrogate mothers in Nepal disembark from an Israeli rescue plane after it landed at Ben Gurion Airport on April 28, 2015 in Tel Aviv, Israel. (Lior Mizrahi/Getty Images)
Advertisement

(JTA) — Nepal’s Supreme Court has issued an injunction to stop women from carrying surrogate pregnancies, depriving Israel same-sex couples of the option to begin the pregnancies there.

The injunction, issued this week, came as the court will rule on a petition to ban the process outright in Nepal. The petition argues that surrogacy exploits the bodies of impoverished women, according to Haaretz. The court must respond to the petition within 15 days.

READ: Why Israeli couples have surrogate pregnancies in Nepal

Israel bans surrogate pregnancies within Israel for same-sex couples, causing many to turn to surrogacy in foreign countries. Nepal has emerged as a relatively affordable option for the process, especially as India and Thailand have banned surrogacy. When Nepal suffered a major earthquake in April, several of the Israelis evacuated were couples who had been in the country picking up their surrogate children.

The ruling will not affect couples already in the midst of surrogate pregnancies, but it will bar couples from beginning them. The Center for Surrogacy-Israel estimates that some 100 Israeli couples begin the process in Nepal each year.