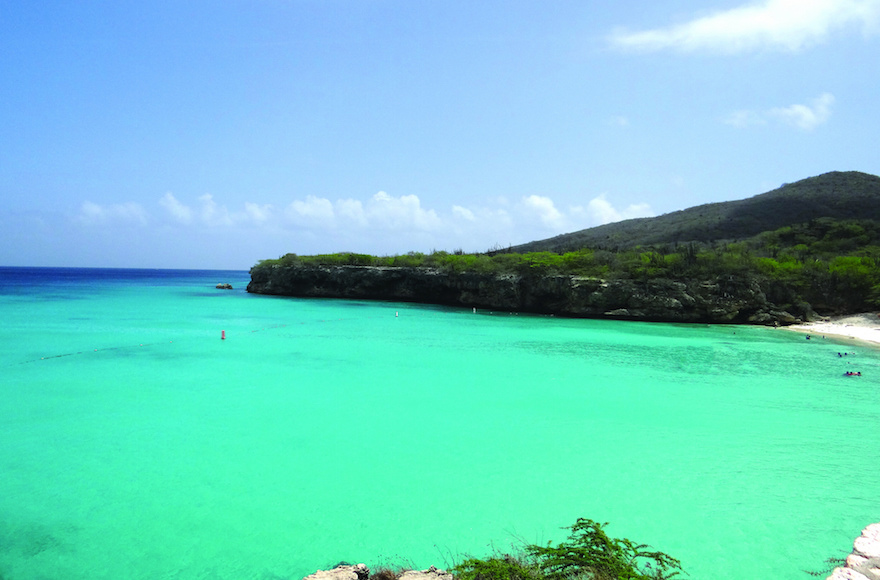 WILLEMSTAD, CURACAO (Washington Jewish Week via JTA) – Curacao is a beautiful place. Tourists come to the Caribbean island nation to explore its hidden beaches and dive in its turquoise waters. Locals, whether from the countryside or the pastel-colored capital, enjoy a relatively strong economy and year-round good weather.

At most, 300 Jews live in Curacao – located off the coast of Venezuela and technically part of the Netherlands. Despite their dwindling numbers, Curacao’s Jews take pride in their rich history. Their ancestors have lived on the island for hundreds of years and thrived in trade, commerce and banking.

What’s left of the Jewish community is united by religious tradition. In the capital, Willemstad, can be found a centuries-old synagogue, a Hebrew school and an active BBYO chapter. Extended families routinely gather for Shabbat dinner.

Willemstad is a UNESCO World Heritage city. Its grand, pastel-colored buildings — white until 1817, when the governor ordered them painted to combat glare from the sun — match the island’s colorful culture, which melds Spanish, Portuguese, Dutch, African, Caribbean and South American influences.

From one light-yellow building in the historic Punda district hangs a small sign directing visitors to the entrance of Mikve Israel-Emanuel Synagogue and Museum, the oldest continuously used synagogue in the Western hemisphere.

Visitors enter under a Hebrew sign that reads “Blessed may you be in your coming” into a black-and-white tiled courtyard. To one side is the historic synagogue, where every Shabbat and major simcha has been celebrated since 1732. The synagogue is now affiliated with the Reconstructionist Jewish movement.

Sephardic Dutch Jews settled in Curaçao in 1651. They earned their livings primarily as merchants and built a soaring Sephardic-style “snoa,” or synagogue. Inside, four white columns inscribed with the names of the biblical matriarchs anchor the building and giant candle-laden chandeliers hang above mahogany pews.

Strikingly, the synagogue’s floors are covered in white sand imported from Suriname.

Three official explanations are offered for the sand, a feature also found on the floors of other Spanish-Portuguese synagogues in the Caribbean. One: It is intended as a reminder of the 40 years the biblical Israelites wandered in the desert. Two: Many of the Sephardic ancestors of today’s congregants lived as “conversos,” or secret Jews, in Spain and Portugal, and sand floors helped to muffle the sound of their worship to passers-by who might wish them harm. And three: The sand symbolizes the promise God made to the Abraham to multiply his seed “as the sands of the seashore.” 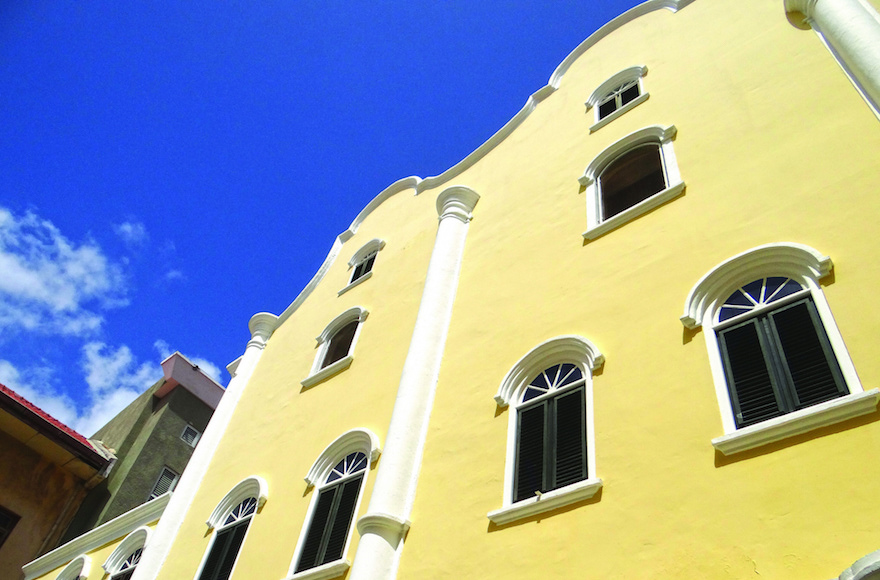 Across the tiled courtyard, through an iron gate and another courtyard, is the Jewish Cultural Historical Museum. Curator Myrna Moreno said she strives to both preserve the past and tell the story of the Jews who remain on the island.

During the community’s high point, at the end of the 18th century, Jews are said to have accounted for about half of the whites in Curacao. (Black slaves vastly outnumbered their white owners at the time.) Today, the few hundred Jews are a small fraction of the island’s population of about 150,000.

The biggest challenge at the museum, according to Moreno, is coaxing locals to explore Curaçao’s Jewish history.

“The cruise-ship tourists, they come to the museum, but the local people you have to inspire, you have to teach them. There is a threshold – they’re scared,” said Moreno. “They say, ‘What are they doing in there? A church with sand on the floor? They must be doing strange things in there.’”

Moreno’s favorite exhibit is a deerskin Torah scroll from 1320, carefully stored upright in its own glass cabinet. Another exhibit tells the stories of the nannies of Jewish children, known as “yayas” in the local Creole language, Papiamento.

Yayas were black slaves or former slaves who looked after the children of wealthy Jewish households. De facto second mothers, they taught their charges Papiamento and about local wildlife.

Some members of Curacao’s Jewish community worried about the controversy such an exhibit might attract, said Moreno, but she has found the response to be overwhelmingly positive.

“I was getting people from 80 to 85 years old coming with grandchildren,” said Moreno, recounting the visits of two former yayas.

“One lady said, ‘I was a seamstress for all these Jewish people, can I touch this fabric?’” referring to a yaya uniform displayed on a mannequin. “That is the link I am trying to get.” 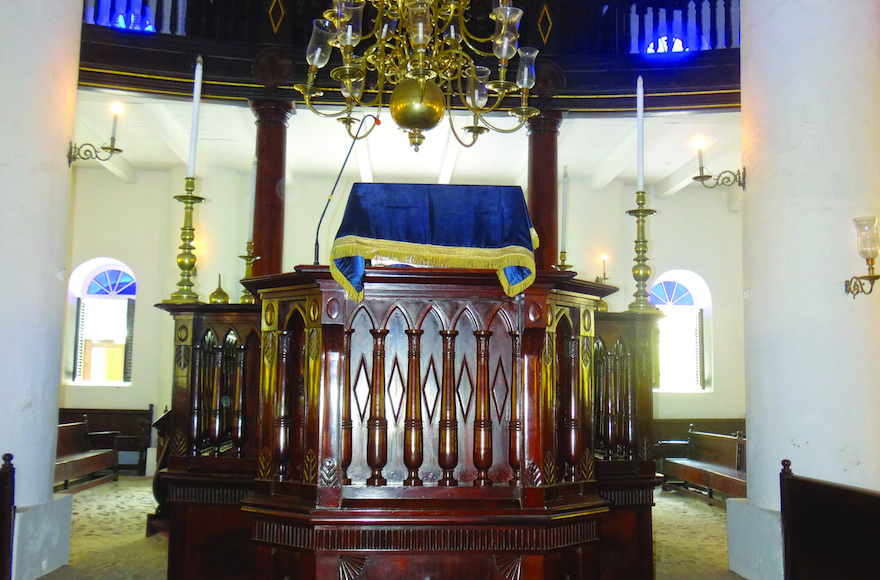 The pulpit on the sand floor of the Mikve Israel-Emanuel synagogue in Willemstad, Curacao, in 2015. (Melissa Apter/Washington Jewish Week)

Across St. Anna Bay, which divides Willemstad, guide Clarita Hagenaar directed tourists’ attention to the grand mansions of the Scharloo district. The area was once home to wealthy Jewish families such as the Maduros and Penhas, whose names are still emblazoned on the sides of buildings in the capital.

Hagenaar, an older woman with a youthful air, gestured to the corner of a busy intersection, not far from the floating market where Venezuelans sell fish and fresh produce. There, in her childhood, she recalled, tourists would come to town and make huge purchases from the Jewish-owned jewelry stores. So safe was the island that porters would carry the diamond-laden bags down the street to the ships without security escorts, she said.

During the High Holidays, Hagenaar said, the closures of the Jewish shops effectively shut down the market, giving everyone a holiday.

These days, she said, a new wave of immigrants from China and India operate many of the shops downtown.

Hagenaar paused outside a yellow-and-white building that used to be Temple Emanuel. Sephardic Jews who wanted to practice a more liberal stream of Judaism — akin to the Reform Jewish movement that was taking root in the United States — founded the synagogue in 1864.

After 100 years of crossover and intermarriage, the congregation merged with what was then Mikve Israel, now called Mikve Israel-Emanuel.

In the 1920s and 1930s, Ashkenazi Jews, predominantly from Central Europe, began arriving in Curaçao. Like their brethren in the United States, they took up as peddlers before becoming shop owners just as prominent as their Sephardic neighbors. The Ashkenazi immigrants established a social center and sports club and dedicated their own congregational building called Shaarei Tsedek in Scharloo in 1959.

In the 1980s, the congregation sold the building to move to a more suburban location, though its new building, which features a stunning glass dome, was not completed and dedicated until 2006. Shaarei Tsedek continues to follow Asheknazi Orthodox customs, though some Sephardi Jews attend too.

Sheila Delvalle-Seibald and her husband Morris Seibald belong to both congregations. Morris’ grandfather, Selig Seibald was a founder of Shaarei Tsedek, while Sheila’s family has belonged to Mikve Israel-Emanuel for seven generations.

When the two married some 40 years ago, theirs was considered a “mixed marriage.” Up to the day of the wedding, Sheila said, her future husband’s grandmother asked relatives, “Are you sure [Sheila is] Jewish? She doesn’t speak Yiddish!”

Morris, admittedly, prefers to spend Shabbat mornings at Shaarei Tsedek, and the couple alternates where they worship for the major holidays.

Every Friday night and Saturday morning, Mikve Israel-Emanuel is filled with worshippers and the sounds of a grand pipe organ, built in 1866 and thought to be the second oldest in the Americas. To avoid violating Jewish law, a man from the local Adventist church plays the organ on Shabbat.

(The Curacao Tourist Board and Diamond Public Relations Melissa Apter’s trip to Curacao. They had no role in the writing or editing of this story.)