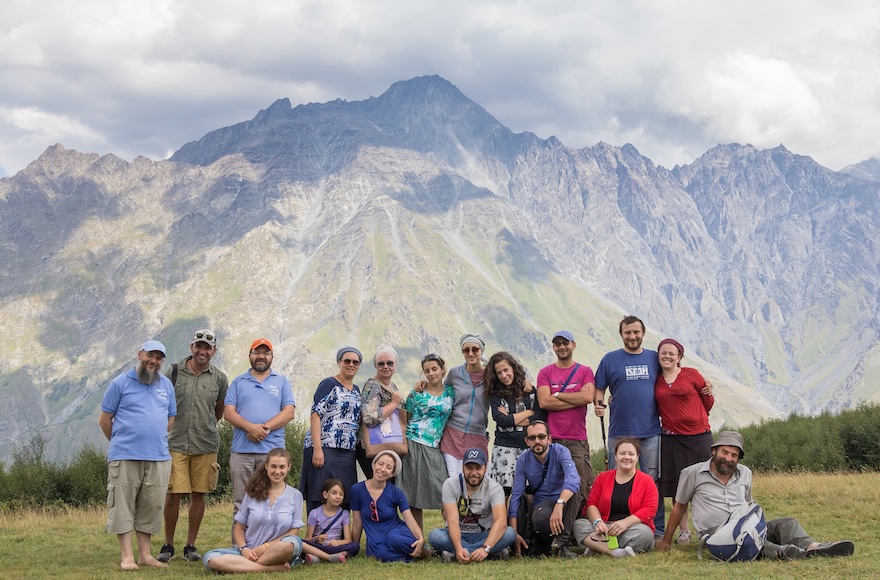 TBILISI, Georgia (JTA) — Until April of last year, Julia Podinovskaya felt like she had a pretty good handle on where her life was going.

Born to a middle-class Jewish family in the eastern Ukrainian city of Donetsk, Podinovskaya, who is in her 20s, was volunteering with the local Jewish community while preparing to finish her bachelor’s degree in education at a local university.

Moving to Israel, or anywhere else, was not on her mind.

“Everything was planned,” she said in an interview at a Jewish summer camp near Tbilisi, the capital city of this republic. “On my father’s birthday, I already knew what I would give him the following year.”

But Podinovskaya’s life was turned upside down in the spring of 2014 when her city — and its Jewish community — were ripped apart in deadly fighting between Russian-backed separatists and Ukrainian government troops. When the university shut down, Podinovskaya began helping the  Jews of Donetsk, restarting the besieged city’s cultural activities for Jewish children after their shuttering because of the war.

In February she left for Kharkiv, a city located 185 miles northwest of her hometown, joining hundreds of thousands of internally displaced Ukrainians.

Now, after spending the summer at the Zionist camp in Georgia, Podinovskaya is considering leaving Ukraine for Israel.

While not “instinctively attracted” to the idea of living in the Jewish state, Podinovskaya said, “I need to weigh my options because of the circumstances of my life.”

The summer camp she attended, Tchelet, is run by the Kiev-based Zionist Seminary, or Midrasha Zionit. It’s part of an effort by the Jewish Agency, which works to facilitate immigration to Israel and co-funds the camp, to reach out to Ukrainian and other Russian speakers who once had been resistant to the idea of moving to Israel.

“Generally speaking, those who wanted to leave left in the ’90s,” said Natan Sharansky, the chairman of the Jewish Agency, referring to the approximately 1 million Jews who came to Israel from the former Soviet Union.

But war has driven thousands more to Israel, or at least to consider the possibility. From January to August, 4,204 Ukrainian Jews immigrated to Israel — a 50 percent increase over the corresponding period the previous year. That’s on top of a nearly 200 percent increase in immigration to Israel, or aliyah, between 2013 and 2014. In the latter year, 5,920 Ukrainians moved to Israel. Only France, whose Jewish population is about twice that of Ukraine’s, sent more immigrants to Israel in 2014. 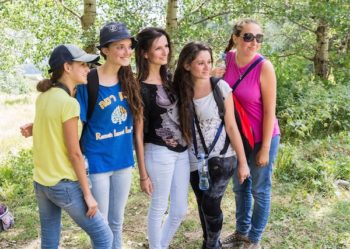 Some of the 140 participants in the Tchelet summer camp this year in Georgia, Aug. 19, 2015. (Eliyahu Yurovsky)

War and instability are also contributing to aliyah from neighboring Russia, where the economy is suffering from international sanctions connected to its annexation of Ukraine’s Crimean Peninsula and support for separatists. The conflict also has unleashed a nationalistic resurgence that is making many Russian Jews uncomfortable.

Aliyah from Russia in the first seven months of 2015 was 3,756 people — a 52 percent increase over the same period last year. Sharansky told JTA that he expects 6,000 Russian Jews and 7,000 Ukrainians to make aliyah this year. The European Jewish Congress estimates that there are 260,000 Jews in Russia and 380,000 in Ukraine.

“In Russia there’s a serious increase from Moscow and St. Petersburg that we haven’t seen in the past, and that’s mainly businessmen, intelligentsia, people who are afraid to find themselves closed off from the free world,” Sharansky said.

Amid the increased interest in aliyah from Ukraine and Russia, the Tchelet camp expanded this summer to include families in addition to its usual groups of teenagers and young adults. This was also the first summer that Tchelet was taking place in Georgia; from 2008 to 2014, the camp was situated in Ukraine, near Kiev, where the Zionist Seminary was established in 2006.

The move to Georgia was part of a push by the Jewish Agency to relocate nearly 1,000 youths from Jewish summer camps in Ukraine. Recognizing an increase in demand for aliyah among populations of Ukrainian and Russian Jews, the Jewish Agency sent in dozens of extra workers to facilitate the influx.

Israel’s Immigrant Absorption Ministry, meanwhile, responded to the Ukraine war by simplifying aliyah procedures for Jews in eastern Ukraine. And the International Fellowship of Christians and Jews — a Christian-funded group that has facilitated aliyah as well as community life in the former Soviet Union and beyond — stepped in with extra funding of millions of dollars for relief operations and special aliyah flights from Ukraine.

At Tchelet, 140 participants — most of them young, single adults, but also some families — stayed for one to two weeks this month at a rustic mountain resort. The visitors — the majority were from Ukraine and Russia, but also some from Belarus, Israel and even France — attended mandatory discussion and workshop sessions led by a mostly modern Orthodox staff about the Jews’ biblical connections to the Land of Israel and their longing for it in the Diaspora.

But at the end of each day, groups of young men and women, many wielding guitars and sometimes a bottle of vodka or two, went down to the lake or stayed indoors as they sang a repertoire of Israeli, Ukrainian and Russian pop songs until the wee hours of the morning.

Despite the counselors’ declared commitment to promoting aliyah, some participants came in the hope of strengthening Jewish life in Ukraine, not Israel.

“This year I came here with the goal of finding a bride,” said Itshak Reynish, a 28-year-old Orthodox Jew from Kiev who has attended Tchelet for seven consecutive years.

Reynish said he does not intend to leave.

“Who said all Jews should leave? I think we should stay and make a strong community,” he said. “At least I intend to.”

Tchelet instructor Efraim Bogolyubov, who grew up in a secular home in Kiev but became religiously observant and made aliyah in 2012, said that despite the aliyah push, “we also give them the feeling it’s legitimate to stay and be Jewish back home.”

(The Zionist Seminary sponsored Cnaan Liphshiz’s trip to Georgia. It had no role in the writing or editing of this story.)