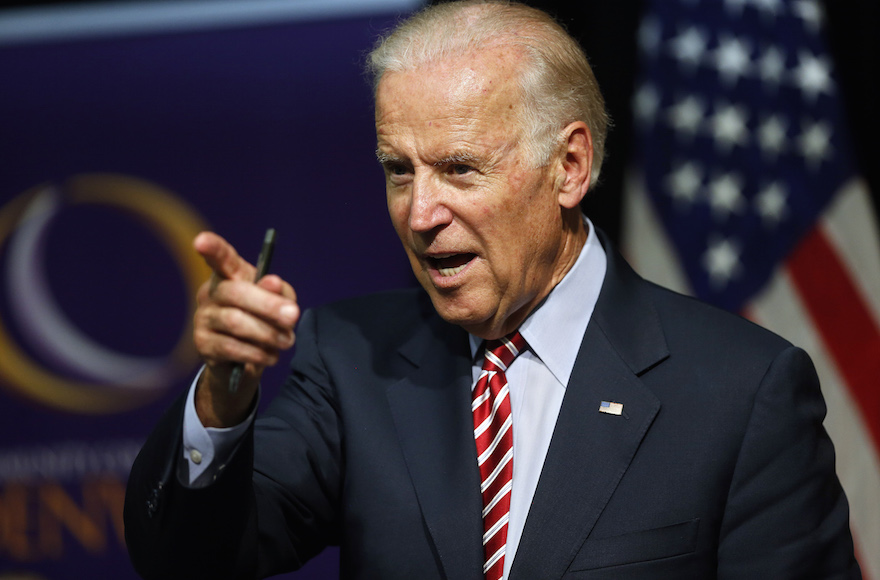 WASHINGTON (JTA) — Vice President Joe Biden said opponents of the Iran nuclear deal were seeking regime change, which could only be achieved through a messy war.

“The only thing that would satisfy deal opponents,” including Israeli Prime Minister Benjamin Netanyahu, “is a change in regime,” Biden said Thursday, addressing Ahavath Achim synagogue in Atlanta.

That could only come with U.S. power, Biden said, which would involve “hundreds of sorties” by combat aircraft.

“There’s nothing surgical about this,” he said.

The outreach was part of an aggressive Obama administration effort to drum up support for the deal among American Jews, who have faced similarly intense lobbying against the deal from Israeli Prime Minister Benjamin Netanyahu and the American Israel Public Affairs Committee.

In Atlanta, Biden vigorously defended the sanctions relief for nuclear restrictions deal reached in July between Iran and six major powers, saying it would prevent Iran from “ever” obtaining a nuclear weapon. Netanyahu and the prominent pro-Israel lobby AIPAC, along with most Republicans, say the deal leaves Iran a nuclear threshold state.

Biden said the Obama administration’s support for Israel was unprecedented.

“Israel has no greater friend than the U.S., and no president has done more to advance Israel’s security than Barack Obama,” he said.

“As the Israeli consul may have to reluctantly acknowledge, 20 percent of Israel’s defense budget” is provided by the United States, Biden said.

The Atlanta event was moderated by Stuart Eizenstat, a top official in the Clinton and Carter administrations whose late wife, Fran, was honored at the lecture. Eizenstat asked Biden whether he was considering a run for the presidency.

“The honest to God answer is, I don’t know,” said Biden, whose son, Beau Biden, died of brain cancer in May. “The most relevant factor in my decision is whether my family and I have the emotional energy to run.”

In Florida, Biden appeared with Rep. Debbie Wasserman Schultz, D-Fla., at the David Posnack Jewish Community Center in Davie. Wasserman Schultz is under intense scrutiny as Congress must consider by Sept. 17 whether to reject the deal. The chairwoman of the Democratic National Committee, she is among the most senior Jewish lawmakers among Democrats, and has yet to declare how she would vote. (The next day she endorsed the deal.)

“I am and have been going through a very careful evaluation process,” she told the Sun-Sentinel. Biden and Wasserman Schultz are close; she headed the student arm of his campaign when he ran for president in 1988.

Wasserman Schultz came under fire from Democrats recently after reports said she blocked the Democratic National Convention from issuing a pro-deal sentiment.

Deal backers have garnered 37 senators, more than the one third – 34 – needed to beat back an override of Obama’s pledged veto of any deal-killing bill. The latest to sign on was Sen. Cory Booker, D-N.J., whose pro-Israel activism dates back 25 years when he met Rabbi Shmuley Boteach at Oxford University.