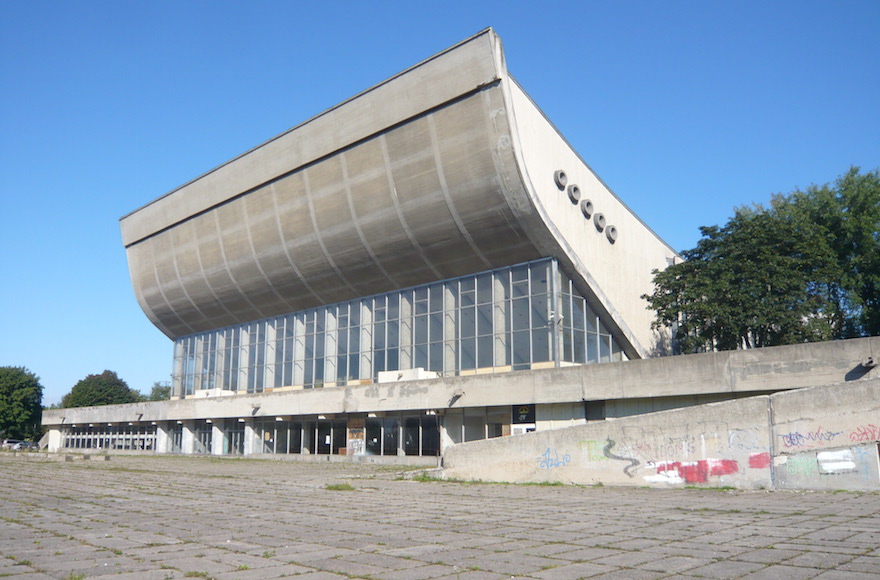 The Vilnius Palace of Concerts and Sports. (Flickr Commons)
Advertisement

(JTA) – Lithuania’s prime minister reiterated that all Jewish cemeteries in the country would be marked or memorialized by 2017.

Prime Minister Algirdas Butkevicius addressed the issue during a visit to Israel this week.

“Let me reassure you that the history of Lithuanian Jews and [their] memorials are very important to the Lithuanian people and the Lithuanian government, and the government adopted a special program to make sure that all cemeteries in all municipalities in Lithuania will be memorialized and marked by 2017,” he said in a speech.

Butkevicius also said that Israeli Prime Minister Benjamin Netanyahu gave his blessing to controversial construction project, the renovation of the Concert and Sports Palace in central Vilnius, which is located atop a former Jewish cemetery.

“He was clear – this is very good,” Butkevicius said in an interview Wednesday with the Baltic News Service. “He gave no critical remarks whatsoever – the prime minister said he had recently received the information and was fully familiar with it.”

The planned renovation is being contested by some local rabbis who argue that it would violate Jewish laws on maintaining the sanctity of gravesites. Soviet authorities leveled the gravestones at the cemetery, known as Shnipiskes or Piramont, in the 1950s.

READ: It’s Jew vs. Jew (and rabbi vs. rabbi) in fight over Lithuanian site

The Jewish Community of Lithuania supports the government’s renovation plan, citing the assertions of a London-based rabbinical association, the Committee for the Preservation of Jewish Cemeteries in Europe, which determined the proposed works would not disturb any Jewish remains.

Last month, the community discontinued the contract of Rabbi Chaim Burshtein, an outspoken opponent of the construction plan and the country’s former chief rabbi. The community’s president, Faina Kukliansky, told local media that Burshtein had spread lies about the planned project.

Butkevicius and other Lithuanian officials have pledged that any construction would be conducted under the London committee’s supervision and in accordance with the Jewish community’s wishes. They also vowed that the renovation of the complex, which is to become a conference center, would feature elements commemorating the hundreds of Jews buried at the former cemetery.

The Baltic nations and other Eastern European countries are among Israel’s staunchest advocates in the European Union when the Jewish state is criticized on its treatment of Palestinians. Observers of these relationships, including Efraim Zuroff of the Simon Wiesenthal Center, have argued in the past that Israel often opts for non-interference on Jewish issues to preserve its Eastern European alliances.