Why Israelis are ditching Turkey for Georgia 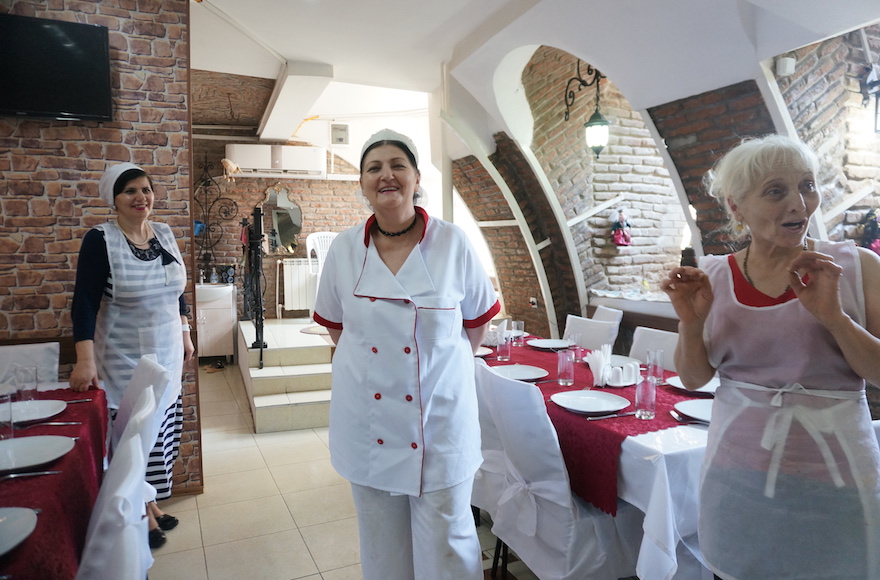 TBILISI, Georgia (JTA) — Rabbi Rakhmim Murdukhashvili had come to think of a crowded synagogue as a distant childhood memory.

Georgia’s Jewish community dates back at least 1,500 years, and its trajectory is emblematic of a decline that in the decades since the fall of communism has been reshaping ancient Jewish communities throughout the Caucasus region — including the Mountain Jews of Azerbaijan and Dagestan, and the Bukharan Jews of Uzbekistan and Tajikistan.

But since 2009, a spike in Israeli tourism has breathed new life into the Jewish community of this mountainous republic known for its breathtaking scenery, friendly people and a super-sized meat dumpling known as khinkali.

“On some Friday nights, I close my eyes and listen to the sound of 80 Jews singing in my synagogue — something I remember only from when my dad would take me to shul,” said Murdukhashvili, the spiritual leader of the Great Synagogue Tbilisi and a Jewish ritual slaughterer, or shochet. “They sing in the Moroccan, not Georgian, style. But who cares? Before they came, the only time I had a full house was on Yom Kippur.”

Rabbi Meir Kozlovsky, the local Chabad emissary, said Israelis “discovered Georgia” as an alternative to Turkey, where Israeli tourism has fallen by half in the last six years following the worsening of relations between the two countries. Some 60,000 Israelis now visit Georgia annually, according to Israel’s Tourism Ministry — nearly triple the number recorded in 2010.

Israeli tourism has prompted the opening of at least three kosher restaurants and several kosher hostels in this capital city alone. It has also meant that Tbilisi’s two synagogues — long populated by a graying, predominantly male crowd — are abuzz with hundreds of Israelis streaming in daily. Some only come to walk around and snap a picture, but many dozens come for the evening prayer service, when the synagogue’s back rows fill up with young men on their way to a mountain trek or are just returning from one.

“I can count on 10 fingers the number of times that we had to open the upstairs floor,” said Murdukhashvili, adding that since the Israelis came, the upstairs synagogue is opened every Rosh Hashanah to accommodate the influx.

Sensing the financial potential of the new visitors, the Jewish community of Tbilisi quickly set up a kosher restaurant, King David, in the synagogue courtyard, which also has a kiosk and a souvenir shop. Meanwhile, local Jewish entrepreneurs are preparing to open a kosher food service, where campers can stock up on kosher food and Israeli snacks to take on mountain treks. 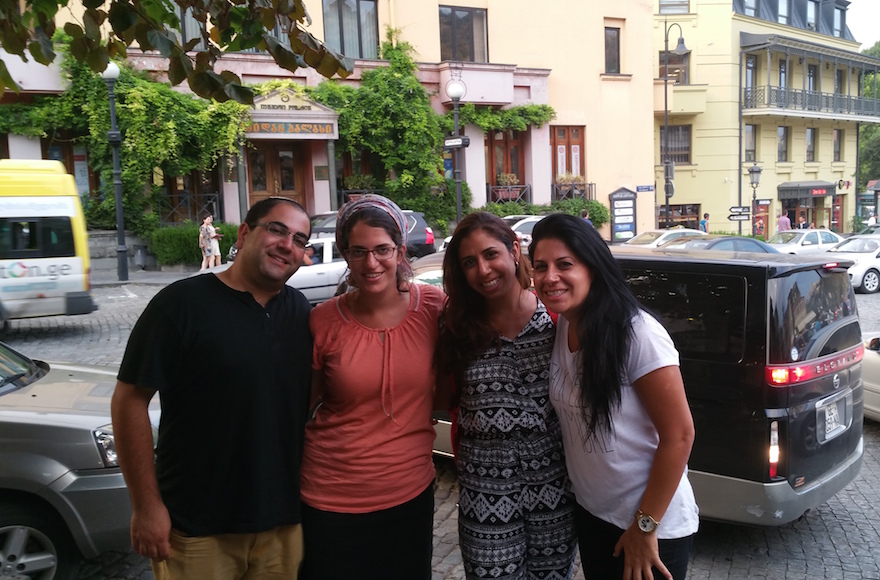 From left, Liad Shemesh, an Israeli tourist, outside the Great Synagogue of Tbilisi with his wife, Einat, Adi Amram and Ortal Panehla, Aug. 20, 2015. (Cnaan Liphshiz)

Georgia is “as close and cheap as Turkey, but without the anti-Semitism,” said Liad Shemesh, an Israeli tourist in his 30s. “I don’t feel especially moved to contribute to the Turkish economy right now.”

Ortal Panehla, who hails from the Tel Aviv suburb of Shaarei Tikvah, said she traveled to Georgia not as a protest against Turkey but because of the country’s beauty and exoticism.

“You can’t really compare a Turkish vacation at some beach resort or at the pool to a hiking trip in Georgia,” Panehla said. “It’s really two different experiences.”

Along with the tourists, some Israelis of Georgian descent have returned permanently to their country of origin to capitalize on the clientele they know so well. Etty Kricheli and her husband, Jacob, who immigrated to Israel in the 1970s, returned recently and last year opened Restaurant Jerusalem in central Tbilisi, where they serve traditional Georgian dishes like beef stew in hazelnut sauce and a kosher variant of khinkali.

They even hired a professional khinkali chef, who sometimes instructs patrons how to consume it: Using the right hand, grab the dumpling by its doughy top, which is not meant for consumption but only to function as a handle.

Kosher supervision at Restaurant Jerusalem, which is usually full to its capacity of 30 diners, is overseen by Nanuli Janashvili, a Georgian Jewish woman in her 50s. Janashvili said she belongs to a traditional community in which it only recently became acceptable for women to work. Restaurant Jerusalem, she said, is her first real job.

The Georgian government has also served as a modernizing force for the Jewish community. Prime Minister Irakli Garibashvili last month attended a ceremony celebrating the 120th anniversary of the synagogue in Oni, 120 miles northwest of Tbilisi. Garibashvili, whose government provided some of the funding for renovations at the Oni and Tbilisi synagogues, called Georgia “the second homeland of the Jewish people.”

But Micho Benzion, said to be the country’s only other ritual slaughterer, is not so sure that Georgian Jewry will be able to survive for much longer. Oni used to have a flourishing Jewish community, Benzion said, but only 16 Jews remain. To pray, women are relied on to provide a minyan, or prayer quorum, a practice generally prohibited by Orthodox Jewish law.

Benzion, 42, who is single and has no children, said he is staying in Georgia for now.

“But maybe it’s time that I, too, move to Israel,” he said, “to finally find a wife and settle down.”