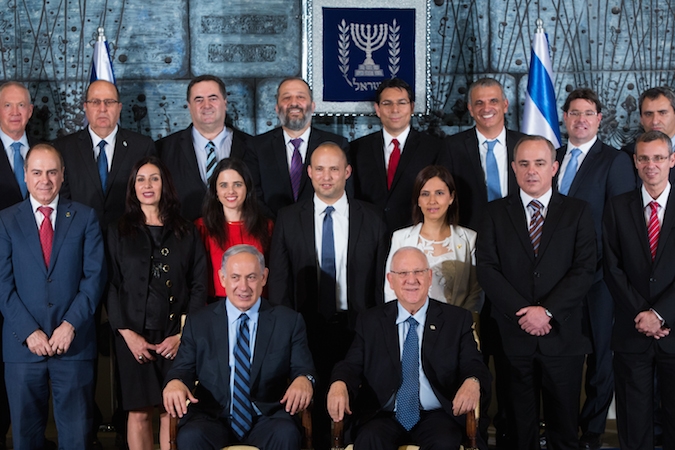 Israel's President Reuven Rivlin (left, seated) sits next to Prime Minister Benjamin Netanyahu (right, seated) as they pose for a group photo together with the ministers of the new Israeli government, in Jerusalem, May 19, 2015. (Yonatan Sindel/Flash90)
Advertisement

The meeting on Friday, which was reported two days later, was considered routine, and covered the regional diplomatic situation, recent news developments, the fight against terror and the security situation in Jerusalem, according to reports.

The meeting at the president’s residence in Jerusalem came after reports surfaced that the monthly meetings between the two leaders had been suspended over differences in foreign policy. Netanyahu and Rivlin had met at least once a month since Rivlin became president a year ago, but their last meeting was on July 17.

“I think we’ve exhausted our differences vis-à-vis our relations with the different international systems,” Rivlin said in an interview with Army Radio earlier this month. “Until these things are off the agenda, it seems we don’t need to meet because it seems each one is busy with the same issues.”

In interviews with the Israeli media in early August, Rivlin publicly criticized Netanyahu’s handling of relations with the United States and President Barack Obama.

Rivlin was not the prime minister’s choice for president, and Netanyahu actively worked against Rivlin’s election.