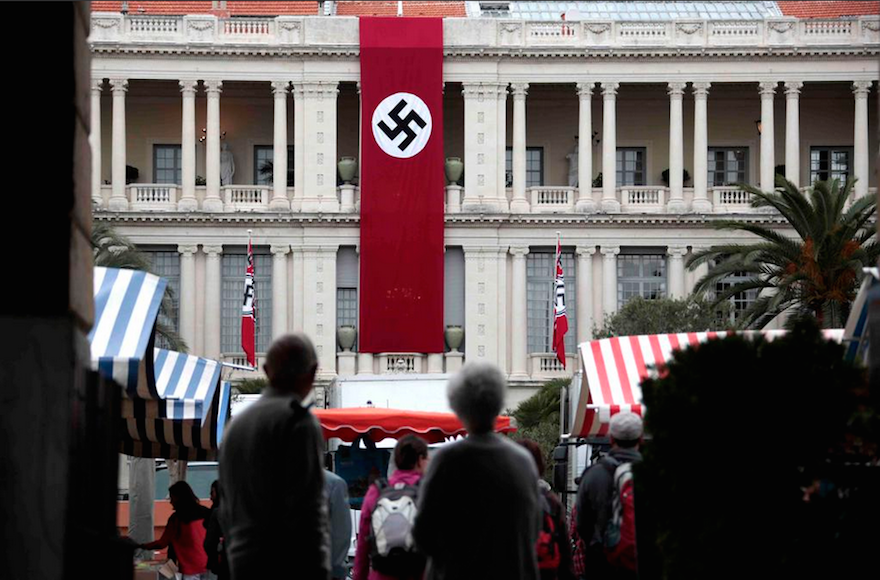 A large Nazi banner unfurled in Nice, France, caused an outcry among locals and tourists.

The red banner with a swastika hung from the Palais de la Prefecture on Monday and Tuesday, during the filming of an adaptation of Joseph Joffo’s Holocaust memoir “A Bag of Marbles.”

According to BBC News, the prefecture insisted it made efforts prior to Monday to alert people and even warned the city’s Jewish community. Nevertheless, many onlookers were puzzled.

“There was nothing to explain what was going on,” Gentry said. “The scene was just surreal.”

Some people started taking selfies in front of the banner at the former royal palace of Nice.

During the war, German Waffen SS chief Alois Brunner stayed in the Hotel Excelsior in Nice to plan roundups of Jews. The Palais de la Prefecture, which is being filmed to represent the Hotel Excelsior, said in a statement that it was an “honor” to play a part in remembering history.

“A Bag of Marbles” describes Joffo’s journey from Nazi-occupied Paris to a safer city in the southeast of France.

A French film adaptation was released in 1975. The remake is being directed by Canadian director Christian Duguay.