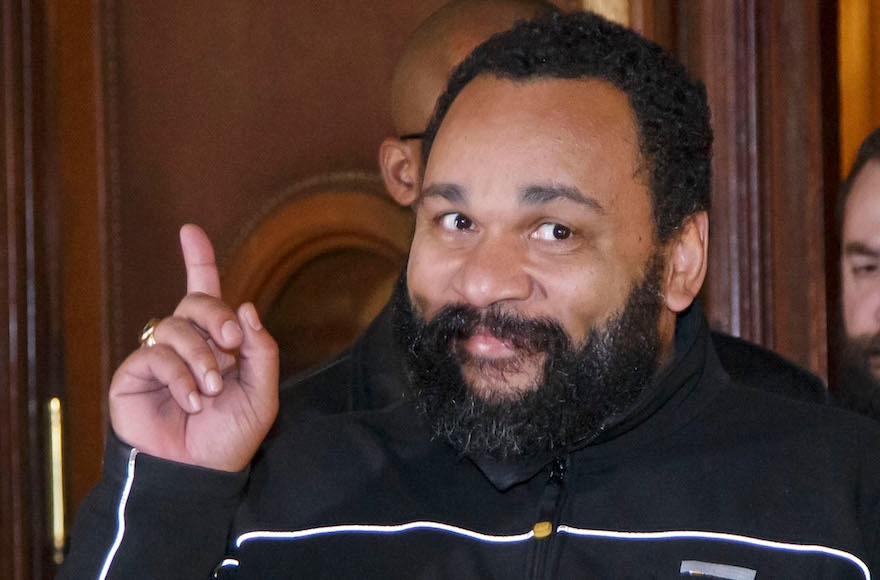 (JTA) — Dieudonne M’bala M’bala, a French comedian who has been convicted of inciting racial hatred against Jews, was ordered evicted from a theater where he has performed for 15 years.

A Paris court issued Dieudonne’s eviction from the Main-D’or Theater  on Tuesday, Le Monde reported. Dieudonne said he would appeal; he may remain at the theater while his appeal is processed.

In filing for the eviction, the theater owners cited violation of the terms of the lease, which they signed with a Dieudonne-0wned firm, Bonnie Productions. But the owners showed that the theater was being used by Productions de la Plume, which is operated by Noemie Montagne — another firm owned by Dieudonne. The violation, they argued, owes to a clause in the lease contract that forbids subletting.

Dieudonne, who has declared himself legally insolvent and penniless, was not present in the courtroom on Tuesday, according to Le Monde. He is believed to be using an elaborate network of accomplices, daughter companies and front businesses to evade paying fines imposed on him for his racial hatred offenses. Dieudonne has been convicted at least eight times of inciting racial hatred against Jews.

Last year, he had to cancel a tour of his previous show after several mayors in France, acting at the request of the country’s then-interior minister, Manuel Valls, issued bans declaring the event an unlawful gathering that threatens public order.

His new show contains profanities connected to Ilan Halimi, a young Parisian Jewish cellphone salesman who was tortured and murdered in 2006 by a gang of kidnappers who targeted him because he was Jewish.

Dieudonne is the promoter of the quenelle quasi-Nazi salute and the term shoananas — a mashup of the Hebrew word for Holocaust and the French one for pineapple — which he uses to suggest the Holocaust never happened without openly violating French laws forbidding such denials.

Tax authorities are investigating Dieudonne for alleged evasion and fraud.