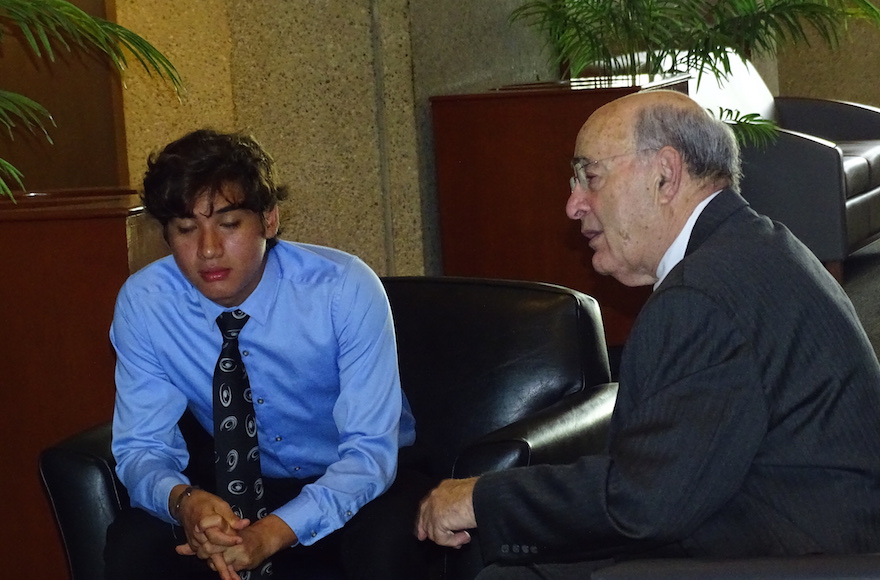 Sebastian Espinoza-Carranza, left, who pleaded guilty to painting anti-Semitic graffiti on Shaare Torah Congregation in suburban Washington, D.C., confers with his attorney, Barry Helfand, prior to his hearing on Sept. 8. (Suzanne Pollak)
Advertisement

WASHINGTON (Washington Jewish Week via JTA) — From murderers to sex offenders, some of the least desirable citizens of Maryland’s Montgomery County have walked through the doors of attorney Barry Helfand’s office.

But it took a quiet teenager to make Helfand question his responsibility as a lawyer.

Sitting in Helfand’s Rockville office this spring, 18-year-old Sebastian Espinoza-Carranza detailed how he, along with three juveniles, had spray-painted swastikas, “KKK” and other graffiti on the Shaare Torah Congregation in Gaithersburg, a suburb of Washington, D.C.

In April, Espinoza-Carranza confessed to vandalizing the Conservative synagogue.

Helfand, who is Jewish, fretted briefly that he was about to be asked to represent a neo-Nazi, someone who hated Jews enough to commit a crime against them.

Typically, in murder cases, Helfand said he learns about the victims. But in this case, Helfand thought, “I am the victim of the crime. When one Jew is attacked, it’s almost as if all are attacked.”

He added, “I don’t think there is anyone who is Jewish who hears about this [incident] who isn’t offended.”

But Helfand pulled himself together, realizing he didn’t know Espinoza-Carranza — nor did the young man know him. He wondered if the high school senior noticed the mezuzah on his office door, or if he even knew what a mezuzah was.

He assumed the Espinoza-Carranza family saw his kiddush cup with a Jewish star prominently displayed on a window ledge behind his desk, placed where anyone sitting in a chair facing the attorney would notice. But Helfand observed no reaction — positive or negative — over the Jewish symbol.

“I don’t know why they picked me,” Helfand said of his clients. “Nobody tells me why.”

After listening to the young man’s retelling of the April 7 incident, the attorney immediately concluded that “this was no anti-Semite. This was a kid.”

Helfand added: “He is just a young man who made a terrible, horrible mistake and is not a horrible person.”

He decided to represent Espinoza-Carranza in his legal troubles — they could send him to prison for nine years — believing that as a Jew, he had a crucial role to play. 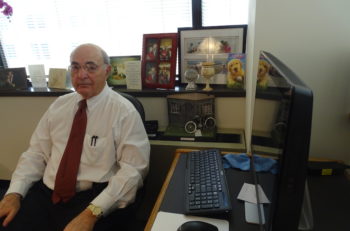 “He needed a Jewish education,” Helfand said of the teen. “If nothing else, he was going to learn Jews have compassion.”

Helfand said he arranged a trip to the U.S. Memorial Holocaust Museum in Washington, D.C., so that his client could “learn why the Nazi symbol strikes such a chord in the Jewish heart.” He also reached out to Rabbi Jacob Blumenthal of Shaare Torah to schedule a private meeting in his office with Espinoza-Carranza.

Though some friends and family cautioned Helfand against taking the case, the attorney said his goal was to keep the teen out of prison and possibly have his record erased in the future.

“I want to time this thing so if he wants to go to college, wants to get a job,” his arrest and guilty plea won’t impede that, Helfand said.

While each of the three charges carries a maximum three-year prison term, Espinoza-Carranza is expected to get five months’ probation and no jail time when he is sentenced on Oct. 20.

Under the plea agreement, Espinoza-Carranza must visit the Holocaust museum, which he’s already done, write an essay about the visit and speak with representatives of Shaare Torah.

Asked if Espinoza-Carranza’s anti-Semitic act affected how she approached the case, Koch said no.

“I wouldn’t treat any case differently,” whether it involved a synagogue, church or mosque, she said.

“The community was the victim,” Koch said, and it is always the job of the prosecutor “to protect the community.”