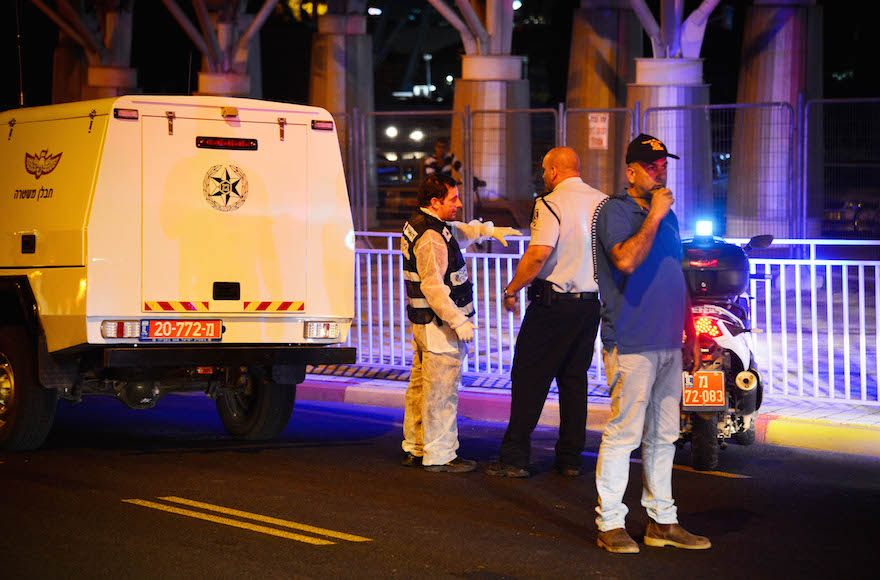 Israeli security seen outside a shopping mall in the Israeli city of Petach Tikva at the site where a Palestinian man stabbed and injured a 25-year old man. (Flash90)
Advertisement

JERUSALEM (JTA) — An Israeli civilian was seriously injured in a stabbing attack at a mall near Tel Aviv by a Palestinian assailant.

The attack at the main mall in Petach Tikvah took place on Wednesday evening. Police and mall security guards disarmed and subdued the alleged assailant, Israel’s Channel 2 reported. The victim, a 25-year-old Israeli man, was taken to a hospital in the central Israeli city 6 1/2 miles east of Tel Aviv.

Video aired on Channel 2 showed bystanders trying to attack the assailant as he lay on the ground. Mall security and police protected him.

The attacker later was identified as  Palestinian man, 30, from Hebron. Hamas said the attacker was a member of its movement.

Moments after the mall attack, a Palestinian teen, 15, attempted to stab Israeli Border Police officers in Jerusalem. He reportedly was subdued and taken in for questioning.

Shortly before the attacks, Prime Minister Benjamin Netanyahu held an assessment of the security situation in Israel with law enforcement and government officials in the wake of several attacks in Jerusalem and on the West Bank.

“Civilians are at the forefront of the war against terrorism and must also be on maximum alert,” Netanyahu said following the meeting in Jerusalem.

He added: “We have known worse times than this, and we will also overcome this wave of terrorism with determination, responsibility and unity.”

Earlier Wednesday, a Palestinian woman, 18, stabbed a Jewish-Israeli man in the Old City of Jerusalem before being shot by the victim, and a mob of Palestinians throwing rocks at passing Israel-licensed cars driving on a road outside Jerusalem attempted to drag a Jewish woman from her vehicle and attack her. Also, a Palestinian assailant stabbed an Israeli soldier and grabbed his rifle in the southern Israeli city of Kiryat Gat before escaping into a residential building, where he was killed in a shootout with police.