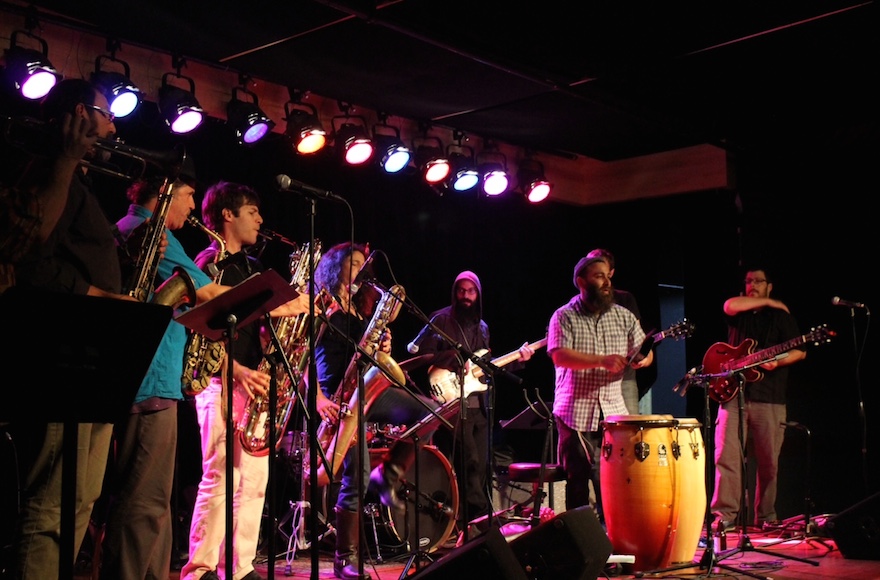 NEW YORK (JTA) — “Jewish Afrobeat” almost sounds like an oxymoron. In some ways, it is – Afrobeat, the groovy fusion of upbeat jazz and funk pioneered by Fela Kuti, was inspired in part by the Black Power movement and African politics.

This fact only adds to the allure of the sonic triumph that is Zion80, an 11-piece band headed by New York-based guitarist Jon Madof that combines the rhythms and instrumentation of Afrobeat with the Hebrew melodies of Jewish folk singer Shlomo Carlebach.

The band, which Madof formed in 2012, has released two albums and is beginning work on a third. The first directly transposed songs written by Carlebach — a popular Orthodox rabbi who sang religious lyrics with acoustic guitar – into Afrobeat form, complete with horns, electric guitars and plenty of percussion. The second consisted of previously unrecorded music written by John Zorn, the legendary downtown New York avant-garde composer, who was impressed by the band’s first effort.

A third album to come next year will consist of more of Zorn’s unreleased compositions, which the group adapts to its Afrobeat sound.

The idea for the band came “instantly” to Madof while he was putting on his socks one Shabbat morning in 2011. He had listened to Fela Kuti’s music for hours the previous day, and when he began humming a Jewish song, the Afrobeat drum rhythms were still in his head. He did some research later that evening and found that no one had ever mixed any kind of Jewish music with the Afrobeat sound. 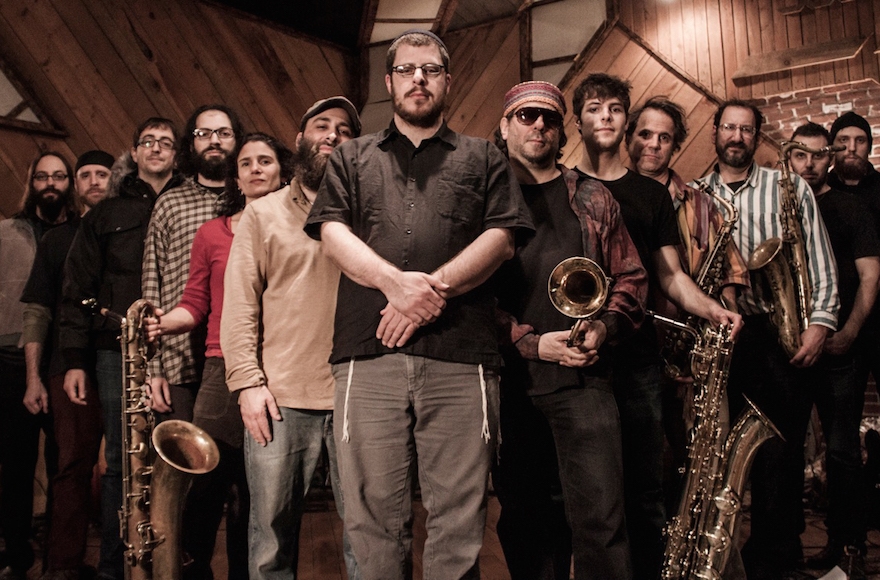 “To me, the Fela thing is not in the melody of the song, it’s in the rhythm,” Madof says. “It’s a structure, and the Carlebach melody lives within that structure.”

“And a lot of times with the Carlebach melody, there’s not much happening rhythmically,” he adds. “So they don’t bump up against each other.”

Fela Kuti grew up in Nigeria and studied music in London in the late 1950s. On a tour in Los Angeles in 1969, he became inspired by the political leanings of the Black Panther movement. In the 1970s, Kuti made waves with his band, The Afrika ’70, through a string of high-energy albums that doubled as criticisms of the Nigerian government and the Westernization of African culture. In the 1980s, he toured the U.S. and Europe with his next band, Egypt ’80 (which Zion80’s name is stylized after).

Shlomo Carlebach grew up Europe in a family descended from old Germanic rabbinical dynasties. He moved to New York in 1939 and became an Orthodox rabbi, eventually serving as one of the first emissaries of Chabad Rabbi Menachem Mendel Schneerson in the early 1950s. His folk songs, usually sung in Hebrew, brought him into contact with the Greenwich Village folk scene in New York (pioneered by Bob Dylan) and helped him establish a following in San Francisco in the 1960s.

As for Madof, 41, he grew up in a Philadelphia suburb where he listened to classic rock guitar heroes such as Jimi Hendrix and Pink Floyd’s David Gilmour. In high school, he gravitated to the DIY ethos of punk bands like Fugazi.

After attending Oberlin College (where he did not major in music, despite the reputation of the school’s highly-regarded music conservatory), Madof worked as a musician and guitar teacher in Philadelphia before moving to New York. He started a family — he has three children, ages 6, 8 and 10 — and picked up graphic design and marketing skills (which he puts to good use as the director of design at JTA’s parent company, 70 Faces Media).

Along the way, he became interested in avant-garde Jewish and world music through the work of modern artists who mined traditional Jewish styles, like Zorn, Klezmatics clarinetist David Krakauer and the saxophone-led band Satlah, which released music on Zorn’s label. The more Madof discovered, the more his interest in Judaism grew.

“I started it with the new stuff and went backwards, because when I just started listening to old [turn of the century] klezmer recordings, I wouldn’t care,” Madof said. “I mean, I want to listen to punk rock. That’s my heart.”

Madof now identifies as Modern Orthodox and sees his religion as a big inspiration in his songwriting process. However, he is adamant that fans should focus on his band’s final product – the music – and not get too caught up in the narrative behind it.

Zion80’s next show is on Dec. 24 at the annual Soulfarm Festival at the Highline Ballroom in New York City.