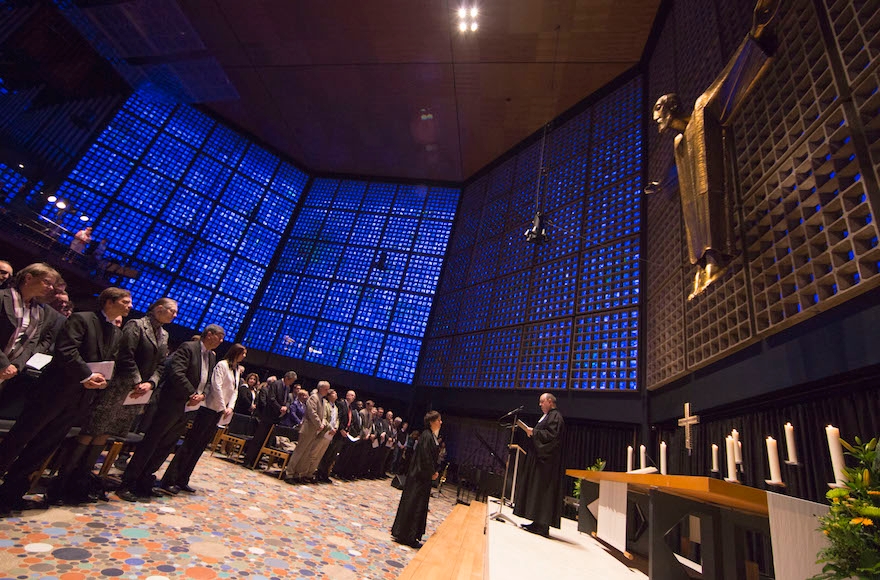 Nikolaus Schneider, right, chairman of the Council of the Evangelical Church in Germany, appointing Margot Kaessmann as the new ambassador of the Lutheran Church at the Kaiser-Wilhelm Memorial Church, in Berlin, April 27, 2012. (Carsten Koall/Getty Images)
Advertisement

(JTA) — Germany’s main Protestant body distanced itself from the anti-Semitism of its founder, Martin Luther, and pledged to confront the dark side of its roots.

In a unanimous decision Wednesday by its 120 members, the EKD Synod, the decision-making body of the Evangelical Church in Germany, renounced the 16th-century theologian’s calls to persecute and banish Jews. Luther had wanted Jews disenfranchised and expelled from Germany.

“We cannot ignore this history of guilt,” given the approaching 500th anniversary of the Protestant Reformation, the statement read. The EKD, an umbrella body for German Lutheran, Reformed and United churches, will mark its Jubilee in 2017.

The statement came several days after Josef Schuster, who heads of the Central Council of Jews in Germany, in an address to the Synod raised the issue of Luther’s teachings.

According to the Protestant online news site Jesus.de, Schuster — who last June said he hoped for a clear sign from the church on the matter — said he was disappointed that the topic seemed to be dealt with only vaguely at the Synod’s annual meeting, where wide-ranging themes are discussed.

The EKD expressed in a statement Wednesday its “sorrow and shame” for the Protestant Church’s failure to respect and protect Jews. It said that the church has a special responsibility to oppose all forms of anti-Semitism and to confront its own past.

“Luther’s view of Judaism and his invective against Jews contradict our understanding today of what it means to believe in one God who has revealed himself in Jesus, the Jew,” the statement continued.

In his 1543 text “On the Jews and their Lies,” Luther called Jews a “base” people and urged faithful Protestants to burn down synagogues and drive Jews from their homes. Luther also backed regulations barring Jews from working or living in his region.

The Protestant Church in Germany also plans to clarify its view on the mission to convert Jews, the Synod head Irmgard Schwaetzer said on Wednesday.