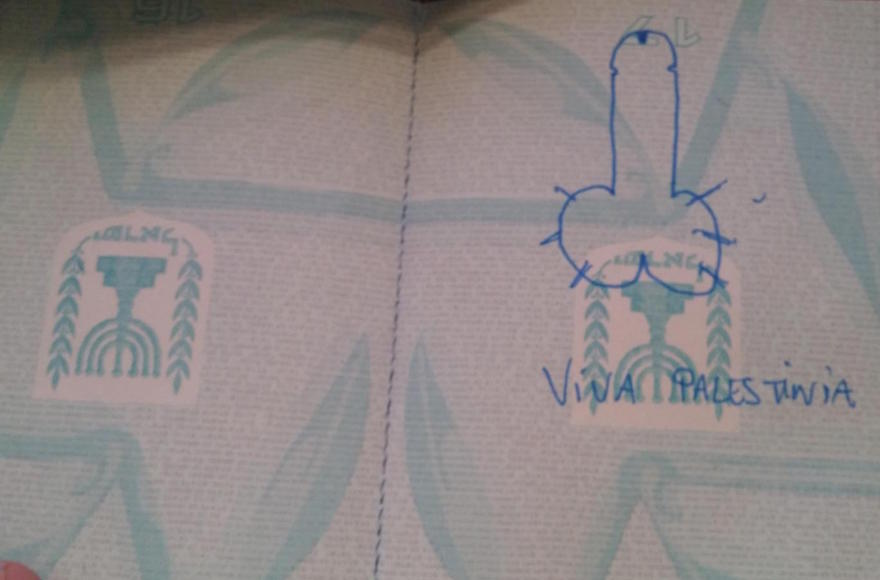 An apparent photograph of Tal Y’aakobi's passport that is circulating online.
Advertisement

(JTA) — An Israeli traveler says a Chilean border official drew a penis and wrote “Viva Palestinia” in his passport.

Tal Y’aakobi, 25, of Rosh HaAyin, said his passport was defaced two years ago when he crossed into Chile from Argentina, The Independent reported Friday. The words written translate to “Long Live Palestine.”

The London Jewish Chronicle reported the story earlier in the week, but did not provide details or identify Y’aakobi.

“From the first moment, the guy at the border was hostile, and threw my passport in front of my face. They then detained us for an hour and a half on purpose until we moved,” Y’aakobi told The Independent.

“There was no reason to do this, only because I am Jewish.”

Y’aakobi told The Independent he did not notice the crude illustration or accompanying text until four or five days after the incident.

Both the Chilean and Israeli embassies in London declined to comment, The Independent reported.

Israeli tourists have complained previously of anti-Israel sentiment in South America. In December, posters saying “Boycott Against Israeli Military Tourism” were put up in Bariloche, Argentina, a city popular with Israeli tourists.