Wife of Jewish restaurateur among 100 Paris victims named by media 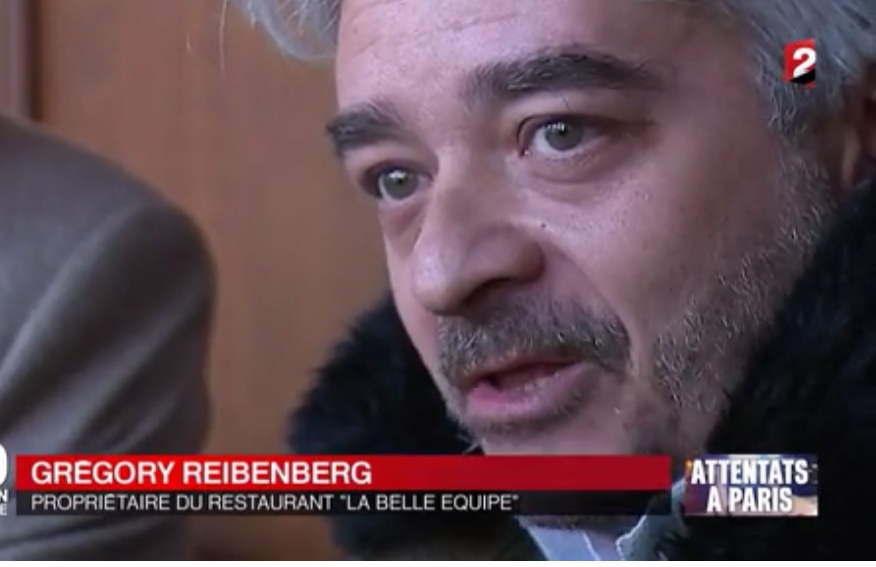 (JTA) — French media published the names of over 100 victims of the Paris terror attacks, including the wife of the Jewish owner of a restaurant that was sprayed by gunfire.

Djamila Houd, the spouse of Gregory Reibenberg, the owner of La Belle Equipe on Charonne Street, was among the 19 people who died at the restaurant last Friday night when gunmen fired on patrons.

At least 129 people died in the night of terror when at least eight terrorists shot up and set off explosives at six, and possibly seven, Paris-area locales.

Houd, who was born to a non-Jewish family of immigrants from Algeria, and Reibenberg, an Ashkenazi Jew, have an 8-year-old daughter, Tess.

On Sunday, Reibenberg led a mourning march with family members to the restaurant where Houd died. In an interview with the France 2 television station, he recounted holding her in his arms as she lay dying from two gunshot wounds to her upper body.

“She said, take care of our daughter, I told her I would and that was that,” said Reibenberg, who was at Le Belle Equipe to celebrate the birthday of one of his employees. He knew nine of the people who died at the restaurant, including one business associate and several employees.

Reibenberg told NRC that his daughter asked him whether it would be possible to undo what happened to her mother.

“I told her to think that her mother is up in the stars, and that she can talk to her there,” he said.

Born in the poor municipality of Dreux north of Paris, Houd was considered a symbol of success in her hometown, according to l’Echo Republicain daily. She owned a successful cafe near Bastille in Paris, according to Le Figaro.

In the days after the attacks, a volunteer trauma psychologist, Jean-Pierre Vouche, has been accompanying Reibenberg at all times, according to the Dutch daily NRC Handelsblad. To cope with his grief and to help others, Reibenberg organized a meeting for relatives of the people who died at his restaurant.

“All of us lost someone — a friend, a spouse, a partner,” Reibenberg said. “I lost all of that, like many of you.”

One of the people attending the session on Sunday was a young man, Fillipo, who said he did not join his late wife at the restaurant because he was at home playing a PlayStation gaming computer that he had just bought.

“I wanted to play with it so I stayed at home like some kid,” he said in tears.