US yeshiva student among 5 dead in Palestinian terror attacks 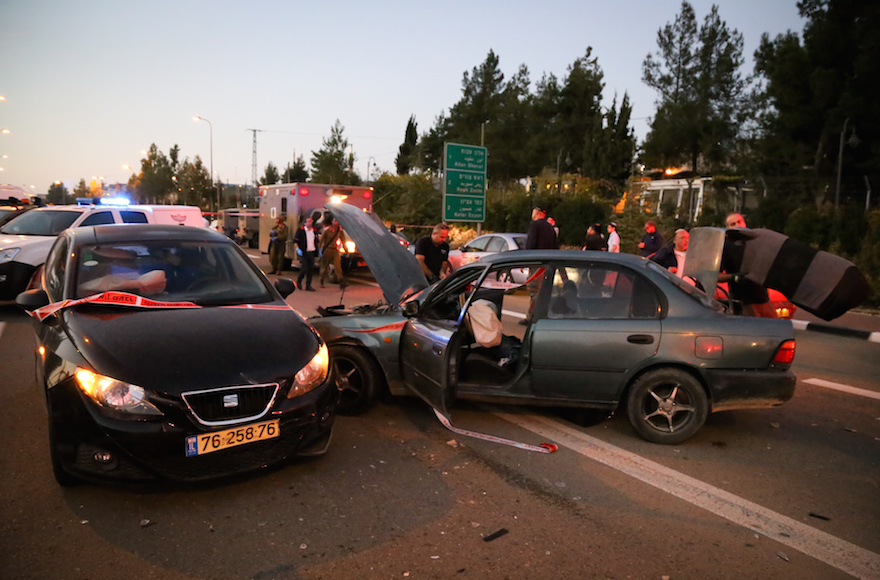 Israeli security forces and rescue personnel at the scene of a drive-by shooting near the West Bank settlement of Alon Shvut in the Etzion Bloc, Nov. 19, 2015. (Gershon Elinson/Flash90)
Advertisement

JERUSALEM (JTA) — Three people were killed in a shooting attack in the West Bank, including an American yeshiva student, hours after two Jewish men were stabbed to death in Tel Aviv at a prayer service.

The five deaths in the attacks, reportedly carried out by Palestinians, are the most on a single day since the latest spate of terror attacks by Palestinians began last month.

In the West Bank attack on Thursday, near the Alon Shvut settlement in the Gush Etzion bloc, the yeshiva student killed was Ezra Schwartz, 18, of Sharon, Massachusetts. Also reportedly killed was a Jewish-Israeli in his 50s and a Palestinian. At least seven other people were wounded, including some American tourists.

At least one attacker, reported to be a Palestinian, shot into a minivan full of people as well as another car near a traffic junction and then rammed his car into several other cars and bystanders, according to reports. One shooter reportedly exited his car and was shot and injured by security forces.

A group of American yeshiva students told Israel’s Channel 2 that they had been in the minivan delivering snacks to soldiers stationed in the area when they came under fire, killing their fellow student.

Three hours earlier, the attack in Tel Aviv occurred next to the entrance of an office used as a synagogue in the Panorama office building during afternoon services, Israel’s Channel 2 reported live from the scene.

Aharon Yesiab, a rabbi from Tel Aviv, was identified as one of those killed. He worked at the Panorama building and was stabbed when he exited a prayer service there. The second victim was later identified as Aviram Reuven, 51.

The Palestinian assailant who was wounded while being apprehended by civilians is in police custody. Police searched for a second alleged assailant, leading to the closing of several roads in the city, but later concluded that there was only one attacker.

Haaretz reported that the assailant received a permit to enter Israel from the West Bank about a month ago and told police he entered Israel with the intent to attack and kill Jews.

“Our hearts are pained and broken. The pain is the same pain. The mourning is the same mourning in Tel Aviv, in Paris, in the Etzion Bloc, and in the Sinai. The pornography of death is striking across the world,” Israeli President Reuven Rivlin said in a statement. “Fundamentalist Islamism is a danger to all free nations everywhere, and we must fight against it unequivocally.”

In a post on his Facebook page offering his sympathy to the families of the victims, Israeli Prime Minister Benjamin Netanyahu wrote: “Behind these terrorist attacks stands radical Islam, which seeks to destroy us, the same radical Islam that struck in Paris and threatens all of Europe. Whoever condemned the attacks in France needs to condemn the attacks in Israel. It’s the same terror. Whoever does not do this is a hypocrite and blind.”

On Thursday evening, Netanyahu held a security consultation with officials from the Israel Defense Forces, the Israel Police and the Shin Bet Security service, according to a staetment from the Prime Minister’s Office.  Among the issues discussed were what action to take in the Hebron area, from where most terrorists have set out recently, including both of Thursday’s attacks.

The Tel Aviv  attack comes a day after the one-year anniversary of the Palestinian terror attack on a synagogue in the Har Nof neighborhood of Jerusalem that left six dead — five worshippers and a Druze police officer. One of the victims died last month after remaining in a coma for nearly a year.