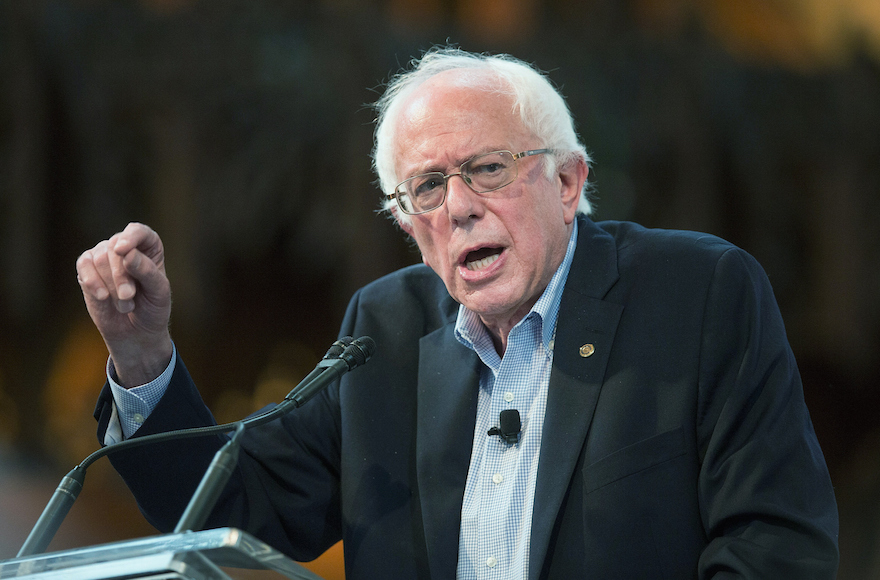 (JTA) — Democratic presidential hopeful Bernie Sanders accused Israel of “overreacting” during its 2014 war with Hamas in Gaza and lauded the Rev. Jesse Jackson, a controversial figure in the Jewish community.

In a lengthy interview with Rolling Stone magazine published Wednesday, the Vermont senator also said he believes in God but is “not into organized religion.” Sanders, who is Jewish, also spoke fondly in the cover story of attending pig roasts.

Asked about Israel, Sanders said he would “support the security of Israel, help Israel fight terrorist attacks against that country and maintain its independence.” However, he added, as president he would “maintain an evenhanded approach to the area.”

“I believe in a two-state solution, where Israel has security and the Palestinians have a state of their own,” he continued. “The United States has got to work with the Palestinian people in improving their standard of living, which is now a disaster, and has been made much worse since the war in Gaza.”

Asked why he is “not a great fan” of Israeli Prime Minister Benjamin Netanyahu, Sanders said that during its 2014 Gaza war, Israel “overreacted and caused more civilian damage than necessary.”

“They have very sophisticated weapons systems. They make the case, and I respect that, that they do try to make sure that civilians are not damaged. But the end result was that a lot of civilians were killed and a lot of housing was destroyed. There was terrible, terrible damage done.”

READ: The Jewish Bernie Sanders who only Vermonters know

Asked about his heroes, Sanders first listed the Rev. Martin Luther King,Jr. and President Franklin Delano Roosevelt, then added, “A guy who has not gotten the credit that he deserves is Jesse Jackson.”

“What he did in the concept of the Rainbow Coalition, we take for granted now,” he continued. “The political concept that we can bring blacks, whites, Hispanics and Asian-Americans together is a very important development in American political history. It certainly laid the groundwork for Obama.”

Jackson, who ran for president in 1984, alienated many Jews, notably New York Mayor Ed Koch, when he refused to repudiate the anti-Semitic comments by black Muslim leader Louis Farrakhan and in an interview referred to New York City as “Hymietown.” He later apologized for the “Hymietown” remark, which he had thought was off the record. Jackson’s pro-Palestinian views, particularly numerous photos of him embracing PLO leader Yasser Arafat, also led to Jewish tensions.

READ: Mayor says Jews would have to be “crazy” to vote for Jesse Jackson

In recent years, however, Jackson has mended fences with the Jewish community, offering in 2011 to meet with Cuban leaders to negotiate the release of Alan Gross, a Jewish contractor imprisoned in Cuba. Gross was released last December.

The Rolling Stone interview also touched on Sanders’ Brooklyn Jewish upbringing, and he noted, as he has in previous interviews, that the loss of relatives in the Holocaust influenced his early interest in politics.