What if the Nazis had won? Amazon’s new drama answers that question — slowly 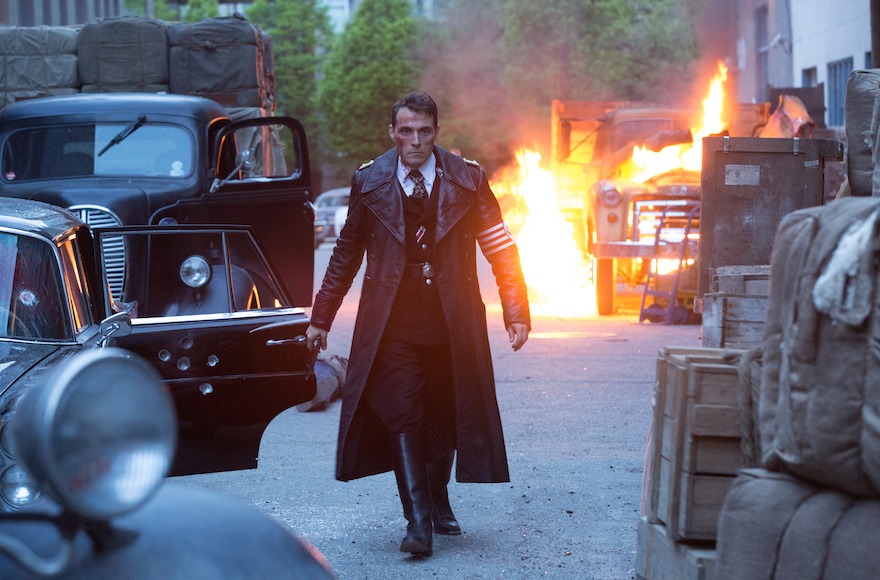 (JTA) — Admittedly, “The Man in the High Castle,” the new original series from Amazon Prime, is in a tough spot. Many TV fans are wondering if the much-hyped drama can live up to the standard set by its Emmy-award winning Amazon predecessor, “Transparent.”

“High Castle” is based on — but takes liberties with — Philip K. Dick’s Hugo Award-winning novel of the same name, an alternate history in which the Axis Powers win World War II after exploding a nuclear device on Washington, D.C.

It’s 1962 — 15 years after the Americans surrender — and the United States is divided into three sections: the Greater Nazi Reich in most of the east, the Japanese Pacific States along the West Coast and a neutral zone along the Rockies.

In a crowded field of dystopian pop culture offerings — think “The Hunger Games” books and movies and HBO’s “The Leftovers” — “High Castle” has some clever tricks to set it apart. It’s an arresting concept of an Axis-controlled America that, but for a cold Russian winter, might have come true. Plus, the show’s muted color palette is dreary and suitably oppressive; there are only occasional flashes of color, like the bright red, white and black swastika displayed on the strangely out-of-place LED display over 1962 Times Square.

But an appropriate visual patina alone does not carry a story. Where “High Castle” falters is viewers never get a sense of what Americans’ lives are like. It appears that most continue on as before — except for the Jews, who have been mostly exterminated (more on that later). For the most part, people go to work, watch television and seem accepting of the German and Japanese occupation.

READ: When Holocaust truth is stranger than fiction, do we need fiction?

What’s that stuff flying in the air? Oh, it’s just ash from the hospital, explains an amiable midwestern cop sporting a swastika armband. Tuesdays are when “they burn cripples and the terminally ill,” he says, nonplussed.

The story opens with Juliana Crain (Alexa Davalos), who lives with boyfriend Frank Frink (Rupert Evans) in Japanese San Francisco. She spends most of her time studying Aikido. Just seconds before her younger sister, who joined the resistance, is killed, she hands Juliana a film reel of “The Grasshopper Lies Heavy.” It needs to get to the neutral zone to the mythical “man in the high castle.”

Meanwhile, in New York, Joe Blake (Luke Kleintank) also starts out for the neutral zone in a truck carrying the same film.

Both characters watch and are moved by the film, which is mostly newsreel footage of Allied victories early in the war. Why the Nazis fear this or why either Juliana or Joe are surprised is one of many puzzles — after all, it’s not ancient history. The war ended in their lifetimes — surely there are enough people around who remember that the Americans were not entirely pushovers?

The two meet in Canon City, Colorado, in the neutral zone. Neither are aware of the other’s mission; the episode ends with a surprise that raises hopes for the series’ potential.

But, alas, it doesn’t quite live up to them. 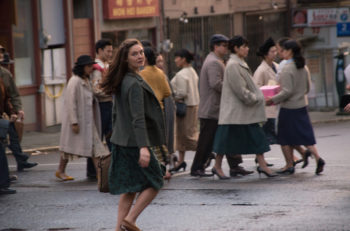 Juliana Crain (Alexa Davalos) in “The Man in The High Castle.” (Courtesy of Amazon Studios)

For one thing, there are too many story lines. There is the tension between the two Axis partners: Hitler is alive, but ill. The Japanese fear that once he dies, Joseph Goebbels or Heinrich Himmler will assume power and attempt to take the West Coast as well. (Which of course underlines the obvious question that’s never addressed: Why would the Germans and Japanese even allow a neutral zone?)

The Japanese trade minister, Tagomi (Cary-Hiroyuki Tagawa), seems to have a mysterious agenda all his own, which he advances based on his reading of a Chinese oracle — although, given the state of Chinese-Japanese relations at the time, the idea of a Japanese minister relying on the I Ching raises other interesting questions.

These mysteries aren’t necessarily problematic — but the super-slow pacing is.

Consider the show’s most interesting character, Obergruppenfuhrer John Smith (Rufus Sewell): In some ways, he’s a typical American suburbanite with a large colonial and nuclear family on Long Island. Yet he has a keen knack for evil. How and why would he rise so fast in the Nazi party?

It isn’t until the sixth hour (the last offered to critics for review) that there is a hint something terrible happened in his past. The sixth episode. And we still don’t know what it was.

Still, producer and writer Frank Spotnitz deserves credit for tackling something different; a kind of sci-fi universe that doesn’t include zombies. Also, it is a Holocaust story that doesn’t downplay the Holocaust.

Frank, Juliana’s boyfriend, had a Jewish grandfather. Brought in for questioning by Japanese cops about his girlfriend’s disappearance, he’s accused of being a Jew. When Frank complains he isn’t, his Japanese interrogator tells him “Jews don’t get to decide who is Jewish.”

Just how many Jews are left in this new world is unclear, but there seems to be a Jewish underground. Following the Zyklon B gassing of his sister and her family, Frink is contacted by one of her friends who whispers “to life” in his ear. It kindles a memory of his grandfather and ultimately the friend recites Kaddish for Frank’s family.

You’d think a scene like that would elicit a strong emotional response, but Frink and others are so blandly drawn that it comes across as artificial, rather than a natural outgrowth of the story.

And yet, though I may have been disappointed by the first six episodes, I’ll be back to watch the last four — if only to discover if there actually is a man is in a high castle, and why he’s there.

“The Man in the High Castle” starts streaming Friday, Nov. 20 on Amazon Prime.