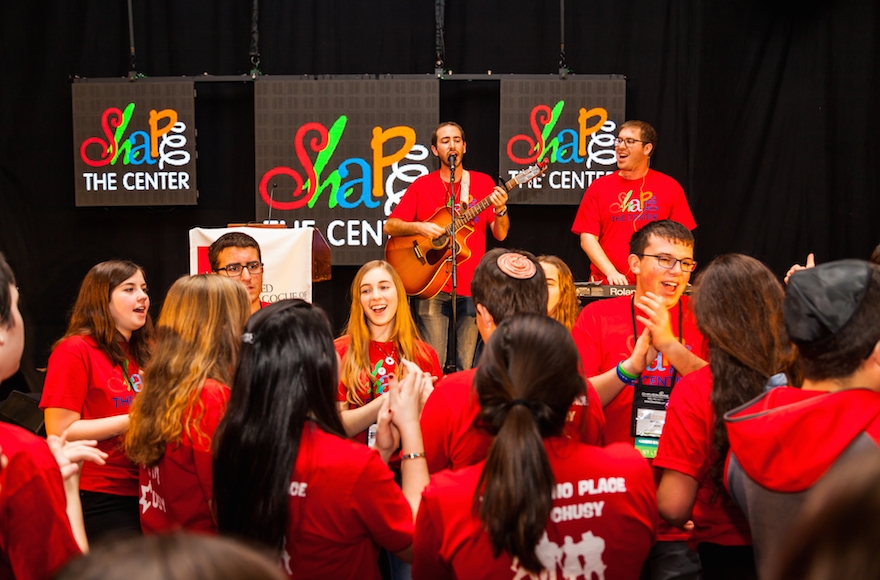 More than 200 members of United Synagogue Youth came to the opening session of the conference of the United Synagogue of Conservative Judaism in Schaumburg, Ill., Nov. 15, 2013. (Courtesy of USCJ)
Advertisement

SCHAUMBURG, Ill. (JTA) – Conservative Judaism is at a crossroads.

The movement is committed to Jewish tradition, but it’s seeing a growing number of its young people walk out the door — most often to Reform Judaism.

American Jews who self-identify as Conservative increasingly are leading lives at odds with the core values and rules of Conservative Judaism, especially when it comes to intermarriage. And the number of Conservative Jews has shrunk by one-third over the last 25 years.

In this movement meant to occupy the center ground between Orthodox and Reform, Conservative leaders are struggling to figure out how to appeal to a new generation of Jews without abandoning their core values or becoming a near-facsimile of Reform Judaism.

Gold’s remarks came at the United Synagogue’s biennial conference, held this week in the Chicago suburb of Schaumburg. As part of the effort to reposition Conservative Judaism, United Synagogue has launched a $350,000 rebranding effort and hired a branding firm, Good Omen.

“We’ve bought into the narrative of decline of our own movement,” United Synagogue’s CEO, Rabbi Steven Wernick, said in his address. “We need to stop shraying our kups [ Yiddish for ‘screaming our heads off’] about everything that is bad and get to work.”

The focal point for the dilemma over how much to stick to tradition versus how much to change has been intermarriage. Though the movement forbids it and does not count as Jews those whose fathers are the sole Jewish parent, four out of every 10 Conservative Jews is marrying out of the faith, and community leaders want to reach out to intermarried Jews.

“We’re in an awkward situation where the sociology is pushing us in one direction, but our organizational structure is hindering us moving in the direction we need to be moving,” said Rabbi Charles Simon, executive director of the Federation of Jewish Men’s Clubs and an outspoken Conservative proponent of embracing interfaith families.

READ: Conservative synagogues wrestle with non-Jews in the pews

There was perhaps no better illustration at the conference of the movement’s identity crisis than at its penultimate session. Led by Rabbi David Wolpe of Sinai Temple in Los Angeles, some 200-300 participants tried to brainstorm a new tagline for the movement – something that could convey its essence, appeal to young Jews and fit on a bumper sticker.

“Tradition and change is actually not a slogan; it is a paradox,” Wolpe said. “It says: We stand for two exactly opposite things. We are the oxymoronic movement.”

Wolpe said he also dislikes the movement’s name, not least because of its unwanted association with a political ideology.

Among the audience’s suggestions for a new tagline:

“Our grandparents would be proud. Our grandchildren will be Jewish.”

“The Judaism of dynamic relationships.”

“Honoring our past, embracing the future.” 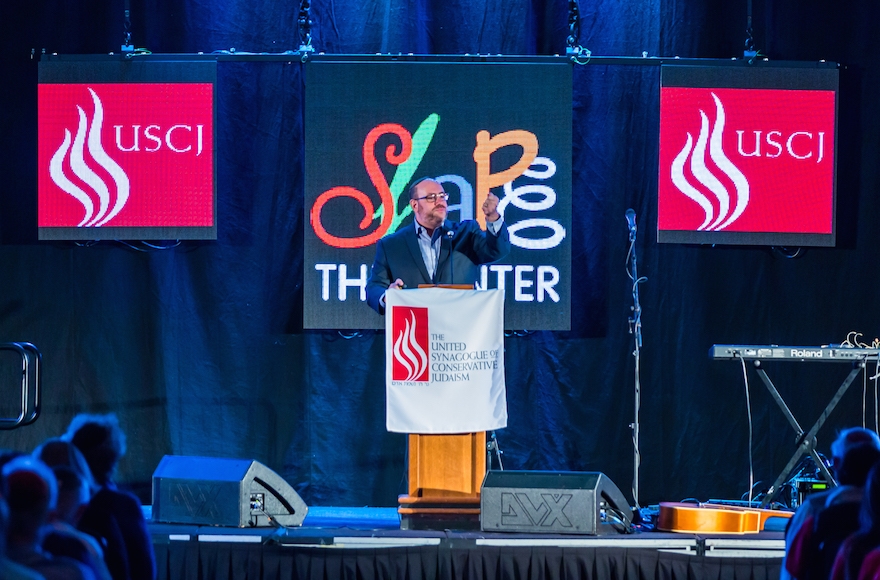 Rabbi Steven Wernick, CEO of the United Synagogue of Conservative Judaism, speaks at the group’s conference in a Chicago suburb, Nov. 15, 2015. (Courtesy of USCJ)

Between 1990 and 2013, the number of American Jewish adults who self-identify as Conservative dropped from about 1,460,000 to 962,000, according to an analysis by sociologist Steven M. Cohen, a professor at Hebrew Union College-Jewish Institute of Religion, based on the 1990 National Jewish Population Study and the 2013 Pew Research Center survey of U.S. Jews.

United Synagogue has acknowledged the problem. One session Sunday morning on the conference’s leadership development track was called “Moving Beyond the Crisis.”

The movement’s own restrictions compound the debate about how to chart the way forward for Conservative Judaism. Conservative rabbis are not permitted to officiate at — and aren’t even supposed to attend — interfaith weddings, putting them at a disadvantage when congregants or their children in interfaith relationships seek a rabbi to wed them. (By contrast, the Reform movement encourages its rabbis to perform interfaith unions.)

Likewise, the Conservative movement does not recognize so-called patrilineal Jews, while the Reform movement does. Some Conservative institutions nevertheless allow patrilineal children into their schools and educational programs, but they may draw a line when it comes to allowing the child to be bar-mitzvahed.

“We need to address patrilineality. It’s the elephant in the room,” Rabbi Jeffrey Lipschultz of the Tri-City Jewish Center in Rock Island, Ill., said during a conference session. “The reality of what’s happening in the movement is not reflective of the reality of what is happening on the ground. As a movement and as leaders of congregations, we have to figure out how to do better.”

On the plus side, many participants at the conference, which drew several hundred people, said United Synagogue has gotten better at servicing its constituent congregations, about 170 of which sent representatives to the conference.

“I have been a USCJ skeptic. The USCJ, to me, felt like an organization that did a lot of talking, and very little listening,” Rabbi Eric Woodward wrote in a report on the conference on his Times of Israel blog.

“But this week, at the USCJ ‘Shape the Center’ conference, I heard a different USCJ,” he wrote. “I saw the USCJ listening, without responding in any insecure top-down Jewsplaining sense, to a world that is quickly sprouting up around it.”

In recent years, United Synagogue has struggled with yawning deficits, a rebellion against fees by a group of member congregations, and criticism of cutbacks that included staff layoffs and the elimination of the organization’s college program, Koach.

Earlier this year, United Synagogue sold its two-floor condo in midtown Manhattan for $15.9 million. Half of that money is being used to create an $8 million sustaining foundation that will support programming but will be controlled by a separate board of directors. The balance will go to operations. The organization just moved into rental space in lower Manhattan.

“United Synagogue did not have a good track record of prudent financial management, and my job has been bringing that into line,” Wernick told JTA in an interview. “We are closing the budget gap. That’s our No. 1 priority.”

United Synagogue is one of the Conservative movement’s three main arms; the others are the Rabbinical Assembly and its flagship New York rabbinical school, the Jewish Theological Seminary.

Rabbi Ed Feinstein of Valley Beth Shalom in Encino, Calif., said that for the Conservative movement to survive and thrive, it must make adaptive changes for the 21st-century, not just technical changes.

“We will not find our way if we say: ‘Let’s have better board meetings and more strategic plans and better fundraising and different dues structures.’ Those are all very important technical changes; none of them are going to save us,” Feinstein said. “We’re only going to get saved if we start by saying: What is the truth of this movement and how can we best convey it to a new generation?”