Slain American teen remembered for his energy and glowing smile 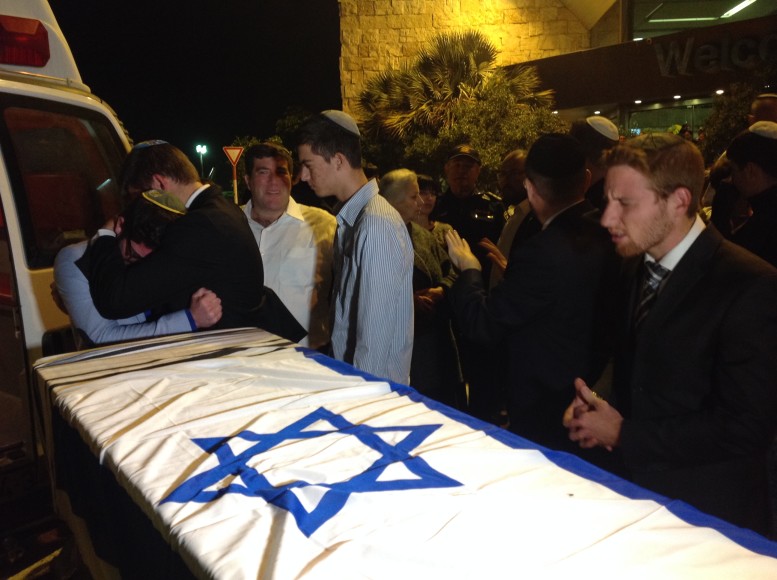 Friends and classmates gather around the coffin of slain yeshiva student Ezra Schwartz at Ben Gurion Airport before it is flown back to Massachusetts. (JTA Photo/Ben Sales)
Advertisement

TEL AVIV (JTA) — His best friend remembered him starting up a children’s game on their senior school trip. His teacher retold the time he made Hebrew jokes on a whiteboard during class. His rabbi recalled him committing to study the entire Bible this year. His parents wrote of him reciting whole paragraphs of “Harry Potter” by heart.

And they all remembered his bright eyes and wide grin.

Family, friends and classmates couldn’t help but smile as they grieved for Ezra Schwartz, the 18-year-old American yeshiva student killed by a terrorist on Thursday afternoon as he was volunteering in the Etzion settlement bloc in the West Bank. At a memorial service Saturday night at Ben Gurion Airport,  those who knew him described a young man with a relentless sense of humor and a magnetic personality who cheered up everyone around him.

“He was sweet, pure, very, very social — incredibly social both as a giver and as a taker,” said Schwartz’s rabbi, Yechiel Weisz. “He made everybody else happy, and he loved being around happy people.”

Schwartz, from Sharon, Massachusetts, was a graduate of Boston’s modern Orthodox Maimonides School. He was spending the year at Yeshivat Ashreinu in the central Israeli city of Beit Shemesh, which combines Torah study with volunteering and hikes. He planned to attend Rutgers University next fall.

According to Ashreinu faculty, Schwartz and five classmates had gone to the Etzion bloc, south of Jerusalem, to beautify a nature reserve dedicated to the three Jewish teens kidnapped and killed by terrorists last year. A terrorist opened fire on them, killing Schwartz and wounding his classmates. The five wounded boys have returned to the United States; Schwartz’s body was flown home for a funeral Sunday.

Four other people were killed in terror attacks Thursday in Israel.

“We were deeply saddened to learn about the death of Ezra Schwartz, an American citizen from Massachusetts who was murdered in a terrorist attack on Thursday while in Israel to pursue his studies,” the State Department said in a statement Friday. “We extend our deepest condolences to the victim’s family, friends and community, as well as the family and friends of the four other people killed in yesterday’s tragic events.”

As Schwartz’s coffin sat at the airport, hundreds of friends and supporters gathered in the adjacent terminal, singing and crying arm in arm. Students from Ashreinu sat in a circle, singing soulful Jewish songs — usually reserved for the end of Shabbat — focused on God’s protection. In the center of the circle lay an Israeli flag, a jersey from the New England Patriots football team and a bottle of Schwartz’s favorite drink — Schweppes Apple soda.

Schwartz’s uncle, Yoav Schwartz, spoke about when his nephew would put on costumes and goof around to entertain his little cousins. When Schwartz was 4 years old, Yoav recalled, he recited the Four Questions at the family Passover seder — then stayed standing atop a chair, smiling widely with his eyes closed.

“He was someone who touched people wherever he went,” Yoav Schwartz said. “People were attracted to him because of his sweet demeanor. He had a way of listening that communicated that he really cared.”

Whether as a camp counselor, athlete or student, acquaintances said, Schwartz was always happy. His 10th-grade Hebrew teacher, Efrat Lipshitz, told JTA that when he came unprepared for class once and had to complete Hebrew exercises on the whiteboard, he instead wrote sentences like “I’m cute” and “I want bourekas.”

A year earlier, Lipshitz taught a class that included Schwartz’s best friend. Though Schwartz wasn’t in the class himself, he would always pop in and say “I can’t be without him.”

Schwartz’s frivolity, said Lipshitz, ended when it came to caring for others. When classmate Caleb Jacoby went missing last year, Lipshitz remembered Schwartz being one of the most active student volunteers in the school’s search.

“He didn’t care if he had a test and he didn’t succeed,” she said. “He didn’t care about that stuff.” But when it came to finding Jacoby, she said, “He really cared about it. He took it hard.” Jacoby would turn up four days later.

Schwartz played baseball for four years at Maimonides and was an avid skier. He planned to join an Israeli baseball league in the spring. In an open letter read at the memorial service, his parents wrote that his passion for sports extended to wiffle ball, which he’d stay up playing with his three little brothers until late at night. Schwartz was also close with his older sister.

“There’s nothing more important than playing with your brothers until you’re too tired to move,” his parents wrote. “What a great kid. What a great life.”

Three months into his year at Ashreinu, Schwartz’s rabbis said he had started to channel his boisterous energy into serious pursuits. Crying, Ashreinu’s head rabbi, Gotch Yudin, recalled at the memorial service how Schwartz sat on his bed last week poring over the Bible and circling words he didn’t understand. On the morning of the day he was murdered, Yudin said, Schwartz had considered not volunteering because he was tired — but decided instead to sleep on the bus so he could contribute.

“Ezra came here to do kindness, Ezra came here to learn,” Yudin said in a tearful eulogy. “That’s what we have to do in Ezra’s memory. We have to make so much more kindness for the world here in the Land of Israel.”

The smiles accompanying Schwartz’s eulogies dissipated quickly as his close friends surrounded his coffin, walking by it one by one to pay final respects before it was loaded onto an ambulance and the trip to Boston.

After the doors closed, Schwartz’s friends walked off in a column, sobbing, their arms wrapped around each other.