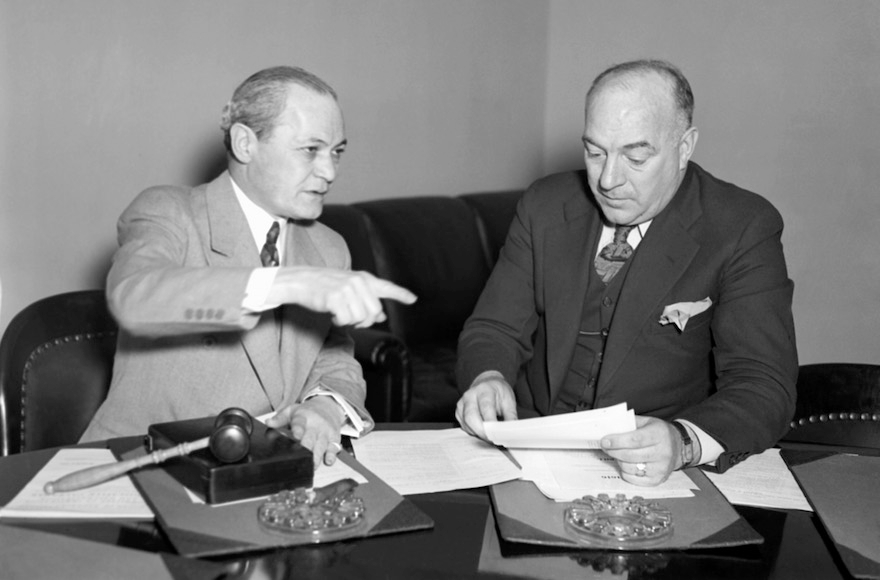 Much has been written about whether Syrian refugees today bear similarities to the Jews who sought refuge from Nazi Europe.

Most Jewish organizations believe there are parallels. Then, as now, the mass exit was chaotic and precipitated a crisis in Europe. Then as now, opponents argued that the refugees would provide cover for infiltrators from among the group they were fleeing. Then, as now, the world looked to the United States for leadership. Then, as now, American popular opinion opposed allowing in the refugees.

Here are five other facts about Jewish refugees and the U.S. from the period that may be relevant today:

Heeding calls from Jewish organizations, President Franklin Roosevelt in March of 1938 called for an international conference to absorb Jewish refugees from Germany and Austria.

As the spring wore on, however, according to Walter Laquer’s Holocaust Encyclopedia, the Americans surprised other potential absorbers of refugees by not really organizing … anything.

“By late spring 1938, the United States had abdicated all responsibility for the conference preparations and looked to representatives of various regions, notably Latin America, to sponsor rescue proposals on their own territory,” Judith Tydor Baumel writes in the article.

A number of the several dozen nations slated to attend – particularly those in Latin America, which were susceptible to U.S. influence – braced for pressure to take in Jewish refugees.

Any hopes the U.S. would provide leadership were dashed in July, when the conference finally convened in Evian on the French-Swiss border. Myron Taylor, a steel magnate with no foreign policy experience who was named conference chairman announced the U.S. was ready to take in 27,370 immigrants – its preexisting quota.

Other nations attending, relieved that the U.S. was essentially ready to do nothing more than it was already doing, followed suit. (Nonetheless, according to the same encyclopedia, the U.S. took in 43,000 Jewish refugees in 1939.)

2. Not every refugee from Nazi persecution was Jewish.

Neither Marlene Dietrich, the German movie star, nor Bela Bartók, the Hungarian composer, was Jewish.

But both the “Blue Angel” and the 20th century melder of folk and “serious” music stood up for the Jews in their countries, making them unwelcome at home.

Dietrich, like many other Europeans who had found success in film in their own countries, had already moved to Hollywood before the rise of the Nazis, but in 1937, she enraged the Nazis by becoming a U.S. citizen.

She showed sensitivity to Jewish sensibilities well past the war; in Israel on a visit in 1960, she asked her audience’s permission before singing in German, according to the Central Zionist Archives.

“Bartók firmly opposed the rise of Nazism, its persecution of the Jews and the banning of their work. He was not a Jew, but said he was ready to become one just to protest against the persecution which was extending itself to Austria and Hungary,” according to a listing of famous refugees on the U.N. High Commissioner for Refugees website.

3. The director of the best ever movie about refugees knew from refugees.

Like Dietrich, Michael Curtiz – born in Hungary as Kertész Kaminer Manó – moved to Hollywood by choice, before the rise of the Nazis. (He liked to say he arrived on the Fourth of July, 1926, but it was probably in June.)

His sister was not so fortunate, and she and her family were sent to Auschwitz, where her husband died, according to a nostalgia entertainment website. Curtiz paid part of his earnings into the European Film Fund, a charity that helped refugees from Europe establish themselves in the U.S. film industry.

His best-known film is an aching testament to love surviving the separations wrought by war: 1942’s “Casablanca.”

4. Opponents who warned of communists and Nazis among the Jewish refugees were not entirely wrong.

The Intercept reported recently on the propaganda by opponents of Jewish immigration during the Nazi era– many of them outright anti-Semites who cited fears of communist and Nazi infiltrators.

These fears were grossly overblown, but not unfounded.

Samuel Dickstein, a Jewish congressman from New York, bears the distinction of being the only congressman known to also have been a spy.

Dickstein, who made his name seeking Nazis in the U.S. in the 1930s, helped establish the House Un-American Activities Committee in that decade. (The committee was set up to track Nazi infiltrators, but two decades later it became notorious for seeing Reds everywhere.)

According to documents unearthed in the post-Soviet era by historians Allen Weinstein and Alexander Vassiliev and revealed in their 1999 book, “The Haunted Wood,” Dickstein was also accepting cash from the Soviets for sharing information and – on at least one occasion – for attempting to obtain U.S. citizenship for an Austrian spy for the Soviets.

His handlers didn’t like him much, as Politico reported last year: “Moscow concluded that Dickstein was ‘heading a criminal gang that was involved in shady businesses, selling passports, illegal smuggling of people, getting citizenship.’”

At least one Nazi also attempted to infiltrate the U.S. as a Jew. In 1942, astute FBI agents correctly identified Herbert Karl Friedrich Bahr as a Nazi seeking refuge in the United States, claiming to be a Jew, according to an account earlier this month by Smithsonian.

5. How dare these refugees jump in line?

Not every argument against the Jewish refugees was necessarily bigoted. Then, as now, there were opponents who said allowing refugees in was an affront to applicants for permanent entry into the U.S. who had gone through the legal process and waited patiently for years.

In May of 1939, the St. Louis floated off the coast of Florida, so close passengers “could see the lights of Miami,” according to the St. Louis entry in the U.S. Holocaust Memorial Museum’s online encyclopedia.

The passengers, desperate, pleaded with Roosevelt through cables. A State Department telegram sent to a passenger stated that the passengers must “await their turns on the waiting list and qualify for and obtain immigration visas before they may be admissible into the United States.”

The St. Louis was forced to return to Europe, although Britain took in 288 passengers. Of the 620 who returned to the continent – some to countries that had yet to be occupied by the Nazis – 258 were murdered by the Nazis