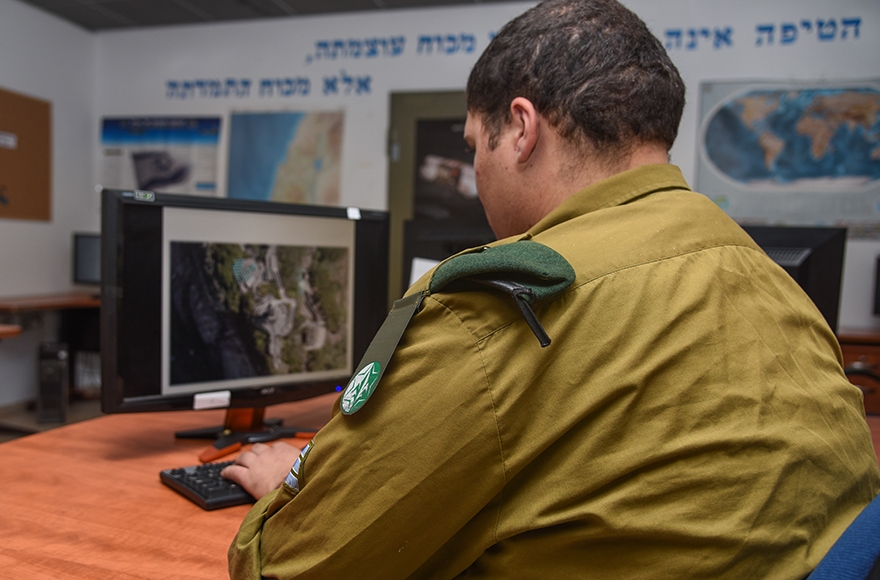 TEL AVIV (JTA) — Sitting in front of a computer at the center of Israel’s largest army base, a soldier stares at the screen, moving pixel by pixel over a satellite photograph, picking out details and finding patterns.

A few years ago N.S., who has autism, thought the Israel Defense Forces wouldn’t take him. N.S., who like other soldiers could not give his name due to IDF protocol, spent his childhood in mainstream classroom settings, where he had focused on studying film and Arabic, but expected to miss out on being drafted — a mandatory rite of passage for most Israeli 18-year-olds.

Now, more than a year into his army service, N.S. is a colonel who spends eight hours a day doing what few other soldiers can: using his exceptional attention to detail and intense focus to analyze visual data ahead of missions. Soldiers with autism can excel at this work because they are often adept at detecting patterns and maintaining focus for long periods of time.

“It gave me the opportunity to go into the army in a significant position where I feel that I’m contributing,” he said. “I’m really swamped. I’m a perfectionist. I want everything to be perfect.” 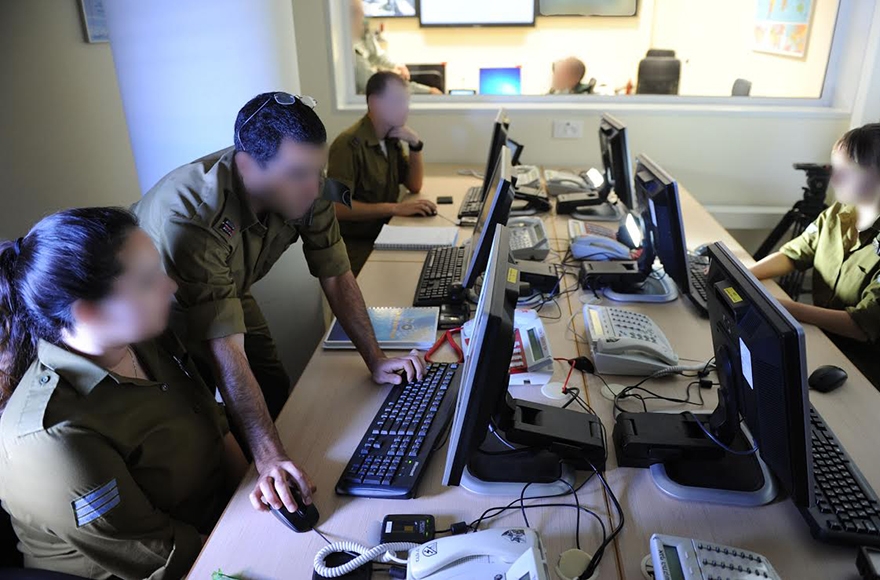 Roim Rachok helps people with autism integrate into the IDF and enables them to serve in key positions. (Courtesy of the IDF)

N.S. is among some 50 soldiers and trainees in Roim Rachok, Hebrew for Seeing Far, a program aimed at drafting the one in 100 Israeli children diagnosed with autism, according to statistics from the Israeli Society for Autistic Chidren. Based in the IDF’s Intelligence Unit 9900, which maps and analyzes visual data, the soldiers of Roim Rachok decipher aerial reconnaissance photos to provide information to soldiers ahead of combat missions. Other tracks train candidates to be army electricians, who deal with devices like night vision goggles, or optics technicians, who work with binoculars.

“There’s an agenda to show people on the spectrum have abilities and can do things,” said T.V., a former Defense Ministry official who co-founded Roim Rachok in 2012. “A big part [of the work] is to notice changes and a certain routine repetition.”

READ: From schools to bomb shelters, Israel lagging on promise to disabled

Autism diagnoses are rising in Israel. According to the Israeli Society for Autistic Children, about 10 times more Israeli children have autism as do adults. In the past, T.V. said, these children at 18 would enter the IDF and be given menial, frustrating jobs.

Participants in Roim Rachok attend a three-month course at the Ono Academic College near Tel Aviv, where they receive training for their army service and an introduction to army life. Along with photo analysis or optics, trainees learn about following orders, staying on schedule and working with a team.

Revital is the mother of a Roim Rachok soldier who is an American Civil War buff.

“He’s a kid with really extraordinary intelligence and abilities, but social understanding and obeying social rules have always been harder,” she said.  “He’s come a long way. This fits him like a glove.”

After three additional months of training on base, participants are drafted and placed within Unit 9900 — sometimes as the only soldier on the team with autism. Before they arrive, their fellow soldiers and commanders receive training on working with people with autism, and every team meets weekly with a counselor to discuss the group dynamic.

READ: What Jews with disabilities can teach the rest of us

N.C., another soldier with autism, said he goes out to eat regularly with his fellow soldiers. D., a second lieutenant who commands another Roim Rachok soldier, said her team usually works smoothly. But when D. first replaced the team’s previous commander, the change challenged that soldier and caused his work to decline.

“He was very close to his previous commander,” D. said. “It was very hard for him, so he regressed. I had stressed him out, so he was less concentrated, not sure who to take commands from.”

After their discharge, Roim Rachok soldiers will face new challenges in finding jobs that suit their abilities. But army service will have given soldiers with autism experience in overcoming obstacles like coping with a changing environment or strategizing to complete a complex assignment.

“The soft skills people learn in their service are no less important than the profession itself,” said Benjamin Hazmi, academic director at Beit Issie Shapiro, an Israeli disability activism organization. “The army is people’s first encounter with authority, with a schedule.”

N.S., the soldier from Roim Rachok, says he wants to be a film editor after the army. In the meantime, he said he feels privileged to be a part of what most Israelis his age consider an obligation.

“The day I enlisted, I got very excited,” N.S. said. “I was really like, I’m an inseparable part of Israeli society.”