Trump: ‘Inappropriate’ of Netanyahu to slam plan on US ban of Muslims 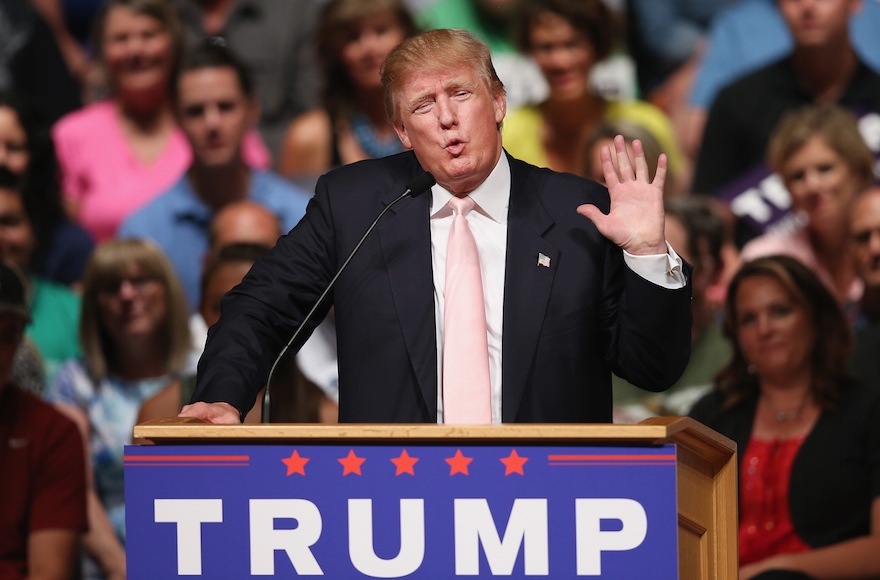 (JTA) — Donald Trump said it was “inappropriate” of Israeli Prime Minister Benjamin Netanyahu to condemn his plan to bar Muslims from entering the United States.

“He modestly condemned them, and I thought it was sort of inappropriate that he condemned them, but that’s OK,” Trump, the front-runner in polls among Republican presidential candidates, said Sunday morning during an interview with CNN’s Jake Tapper. “He wanted to condemn them, that’s what he does. OK? But we have a problem.”

Despite the condemnation from Netanyahu, Trump said, the Israeli prime minister and other world leaders are not distancing themselves from him.

“I had a meeting with Netanyahu. I could be at the meeting right now,” Trump said.

Netanyahu and Trump had a meeting scheduled for Dec. 28 in Jerusalem, but Trump canceled it on Thursday, saying on Twitter the two would meet “at a later date, after I become President of the U.S.” The meeting was arranged about two weeks before he made his statements earlier this month about barring Muslims temporarily.

In condemning Trump’s proposed ban, Netanyahu said: “The State of Israel respects all religions and strictly guarantees the rights of all its citizens. At the same time, Israel is fighting against militant Islam that targets Muslims, Christians and Jews alike and threatens the entire world.”

While Netanyahu condemned Trump’s statements, he stopped short of canceling his meeting with the candidate and former reality show star, saying that he is committed to meeting with every presidential candidate that requests a meeting.

On CNN, Trump said he has been told he is doing Muslims “a favor.”