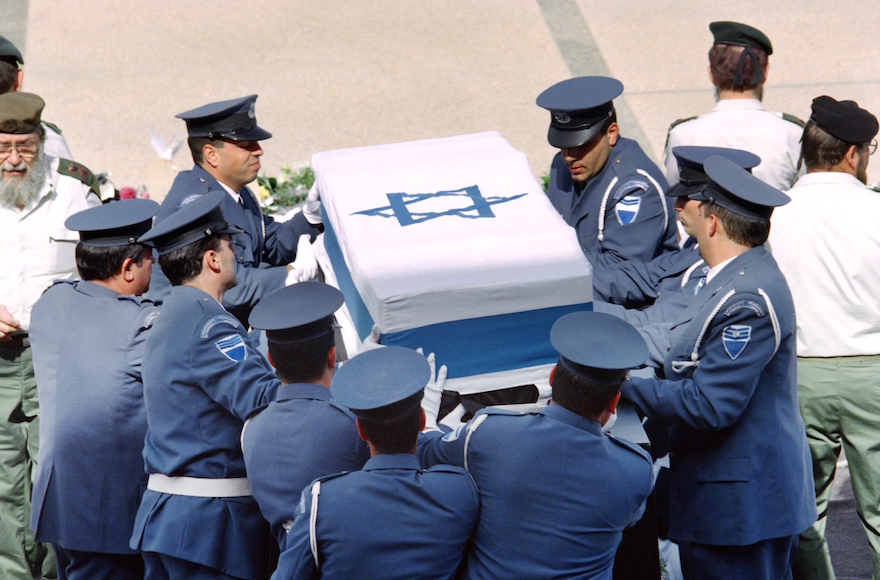 JERUSALEM (JTA) — Benjamin Netanyahu did not disparage Yitzhak Rabin at the slain prime minister’s funeral, as a former U.S. envoy to Israel recalled in a PBS documentary, the Prime Minister’s Office in Israel said.

The Prime Minister’s Office said in a statement issued Wednesday that “these things never happened.”

The comments by Martin Indyk were aired Tuesday night on a two-hour documentary on “Frontline” titled “Netanyahu at War.”

“I remember Netanyahu saying to me: ‘Look, look at this. He’s a hero now, but if he had not been assassinated, I would have beaten him in the elections, and then he would have gone into history as a failed politician,'” Indyk quoted Netanyahu, then the opposition leader, as saying when the two were seated next to each other at the funeral.

The conversation w Bibi took place on Nov 5/95 when we sat together at the Knesset ceremony to receive Rabin’s coffin to lie in state.

Indyk also said in the documentary: “So I think even at that moment of tremendous support, a tragic moment of support for Rabin, Netanyahu was thinking, well, politically he was on the ropes before he was assassinated. He exploited that and ran against Oslo in the [1996] elections and beat [Shimon] Peres, but he only beat him by something like a half of 1 percent.”

A statement by Netanyahu’s Likud party said: “This is another blatant lie by Indyk, who never stops discrediting and defaming” Netanyahu.