‘Mein Kampf’ sells out on first day in Germany 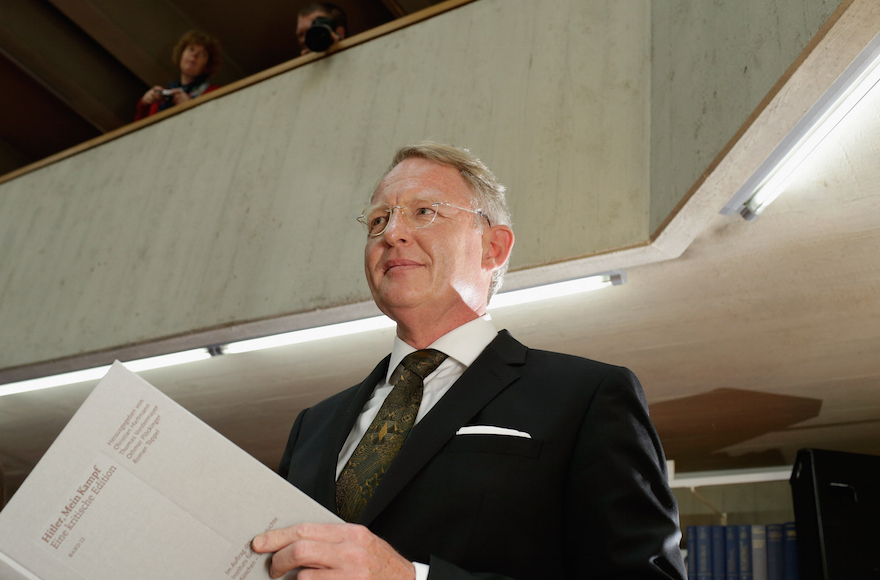 Head of the editing team Christian Hartmann posing with a copy of the new critical edition of Adolf Hitler's "Mein Kampf" during the book presentation at the Institut fuer Zeitgeschichte in Munich, Germany, Jan. 8, 2016. (Johannes Simon/Getty Images)
Advertisement

(JTA) — Demand for a new edition of Adolf Hitler’s “Mein Kampf” has far exceeded supply on its first day of release.

Publishers of the 2,000-page annotated edition of the Nazi leader’s book said at a news conference Friday, the day of the book’s release, that they have received orders for four times as many books as they had printed, Reuters reported.

The 70-year copyright in Germany of the anti-Semitic tract, whose title means “My Struggle,” expired on Jan. 1, allowing it to be published in the country for the first time since World War II. The publication has been controversial; while some Jewish groups have endorsed the annotated edition, others have opposed it.

The Munich Institute for Contemporary History has said it published the new edition to preempt uncritical and unannotated versions, and that it hopes the new edition will help destroy the book’s cult status. “Mein Kampf” can also be easily found on the Internet.

At the news conference, the institute’s director, Andreas Wirschig, said the institute already has received orders for some 15,000 copies but had an initial print run of only 4,000.

The institute also has already received requests for translation into Italian, French and English.

“Mein Kampf” sold 12 million copies in Germany before the end of World War II, according to Reuters.