Pope Francis, in visit to Rome synagogue, calls for end to religious violence 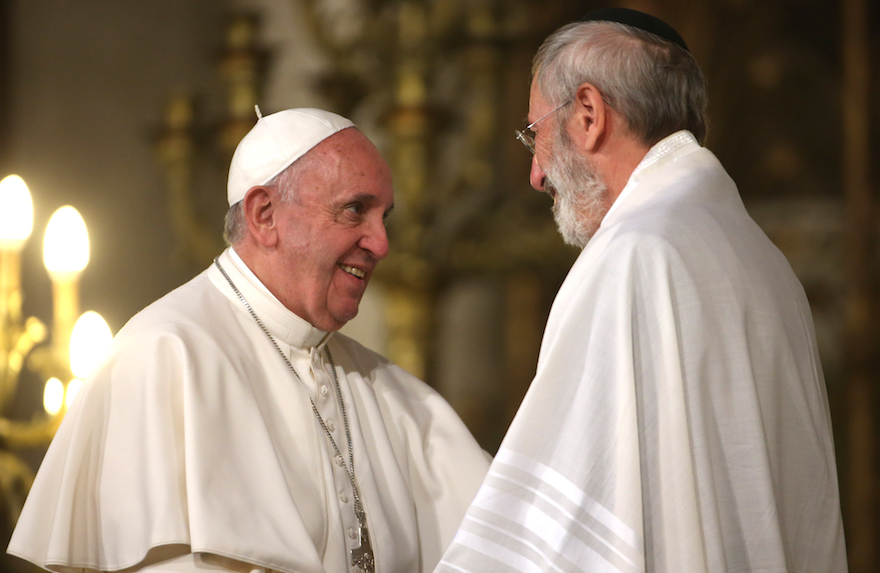 (JTA) — Making the third visit ever by a pope to Rome’s Great Synagogue, Pope Francis and Jewish leaders condemned violence in the name of religion and said the extraordinary rapprochement between Jews and Catholics over the past 50 years should serve as a model for other faiths.

“Conflicts, wars, violence and injustices open deep wounds in humanity and call on us to reinforce the commitment to peace and justice,” Francis said Sunday.

“The violence of man against man is in contradiction with any religion worthy of the name, and in particular with the three great monotheistic religions,” he said. “Every human being, as a creature of God, is our brother regardless of his origins or religious belief.”

Rome Chief Rabbi Riccardo Di Segni described “fanatic visions inspired by religion” that are used to justify violence and terrorism in the Middle East, Europe and elsewhere in the world.

“A meeting of peace between different religious communities, as the one that is taking place today here in Rome, is a very strong sign against the invasion and abuse of religious violence,” he said.

Francis’s visit comes half a century after the Vatican’s landmark Nostra Aetate declaration, which opened the way to formal Catholic-Jewish dialogue.

Pope John Paul II became the first reigning pope to visit a synagogue, in April 1986, a watershed event where he embraced the then-chief rabbi and called Jews Christianity’s “elder brothers.” The Jewish presence in Rome stretches back more than 2,000 years, and the community is considered the oldest in the Diaspora.

Pope Benedict XVI followed up with a visit to the Rome synagogue in January 2010.

“According to the juridical rabbinic traditions, an act repeated three times becomes chazaka, a habit,” Di Segni said. “Clearly this is a concrete sign of the new era, after all that happened in the past.”

During his speech to a sanctuary packed with Jewish community members and representatives of the government, international Jewish organizations, the State of Israel and other faiths, Francis stressed that Christianity is rooted in Judaism.

“You are, in fact, our older brothers and sisters in faith,” he said. Christians, he added, “to understand themselves, cannot fail to make reference to the Jewish roots, and the Church, while professing salvation through faith in Christi, recognized the irrevocability of the Ancient Alliance and constant and faithful love of God for Israel.”

Francis recalled the Holocaust, and noted that experience of the Holocaust must serve as a lesson for the present and the future.

“The Shoah teaches us that we always need the greatest vigilance to intervene promptly in defense of human dignity and peace,” he said.

Francis also addressed his personal feeling of closeness to Holocaust survivors, a group of whom were seated in the first row of the sanctuary.

“Tonight’s visit was warm, direct and clear on both sides.  There was agreement over common roots with diverse paths leading to the achievement of common ideals, involving closer cooperation to combat the major evils of our times,” Lisa Palmieri Billig, the American Jewish Committee representative in Rome, told JTA. “I believe the main message of Francis’ visit is that both Jews and Catholics today are discovering that our special relationship is a gift to be treasured and used constructively.”

She said Francis’s visit could be described as a confirmation of all the advances in Jewish-Catholic dialogue to date.

These included highly significant statements contained in a new document on Catholic-Jewish relations issued by the Vatican on Dec. 10, plus those made by Francis himself. They are, for example, no Christian can be anti-Semitic; all Christians have Jewish roots; salvation is possible for Jews even without their belief in Christ; the Torah is to Jews what Christ is to Christians; Christians must not try to convert Jews; and Judaism and Christianity have a unique relationship.

In her speech during the pope’s 90-minute visit to the synagogue, Ruth Dureghello, the president of the Rome Jewish community, recalled the pontiff’s visit to Jerusalem in 2014 and his hope that Israel “will be able to live in peace and security.”

Dureghello said, ”In order to make this dream come true, we have to remember that peace cannot be conquered through stabbing and terror. It cannot be achieved through bloodshed in the streets of Jerusalem, Tel Aviv, Itamar, Beit Shemesh and Sderot. It cannot be obtained by digging tunnels nor by launching missiles. Can we work on the peace process by counting the number of victims of terrorism? No, we can’t. We must all call for a stop to terrorism. Not only the terrorism in Madrid, London, Brussels and Paris, but also the daily terrorist attacks in Israel. Terrorism is never justified.”

While the pope’s visit was taking place, in the latest terrorist stabbing attack, 38-year-old Dafna Meir, was killed in her own home on Sunday evening in the West Bank settlement of Otniel.

Dureghello also recalled the anti-Semitic terrorist attack in the pope’s native city, Buenos Aires, on July 18, 1994, which claimed 85 lives and wounded over 200 people.

She noted that Rome had already been hit by anti-Semitic terror attacks decades ago, including an attack on the Great Synagogue on Oct. 9, 1982, when Palestinian terrorists killed a toddler and injured scores.

“Pope Francis, today we have a great responsibility vis-a-vis the world for the bloodshed by terrorists in Europe and in the Middle East, for the blood of persecuted Christians and for the attacks against unarmed civilians even within the Arab world, for the heinous crimes against women<” Dureghello said. “We cannot sit and look. We cannot remain indifferent. We cannot make the same mistakes of the past, when we remained silent and turned our backs.”