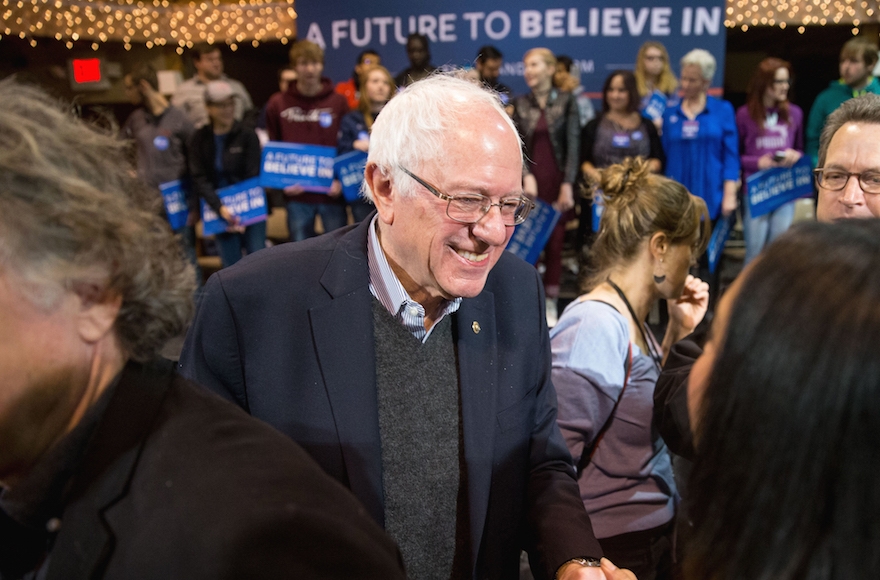 SIOUX CITY, Iowa (JTA) — On a frigid night in what has been an unusually cold winter here, Bernie Sanders packed more than 1,200 people into the resplendent Orpheum Theatre, a nearly 90-year-old venue in this western Iowa outpost across the Missouri River from Nebraska.

After taking the stage late Tuesday night, the independent Vermont senator vying for the Democratic presidential nomination launched into a nearly 30-minute exegesis on the American economy in typically stem-winding fashion, railing against wealth inequality before turning his attention to the noisome effects of money in politics, paid family leave and other frequent themes of his raucous stump speeches.

The Brooklyn-born Sanders’ brash delivery and in-your-face moxie might seem out of place in idyllic, largely rural Iowa, but the style is resonating with Democratic voters here. Indeed in liberal-leaning Des Moines, the state capital, it is mostly Sanders signs that pepper the snowy front lawns in the city’s central neighborhoods. And it is the face of Sanders — actually 15 of them — that adorns a T-shirt sold by Raygun, a popular local clothing store with a wide selection of caucus-themed apparel. Nearly 250 of the $39 novelty shirts have been sold since early October.

“It’s like your grandpa is running for president,” said Lauren Matysik, a Raygun graphic designer. “It’s so cute.”

While concerns have been raised that Sanders’ crotchety zayde image – described recently as “very Jewish” by one political strategist – could ultimately serve as a handicap in a general election, there is agreement here among both Jews and non-Jews that Sanders’ religion is a moot point this early in election season. 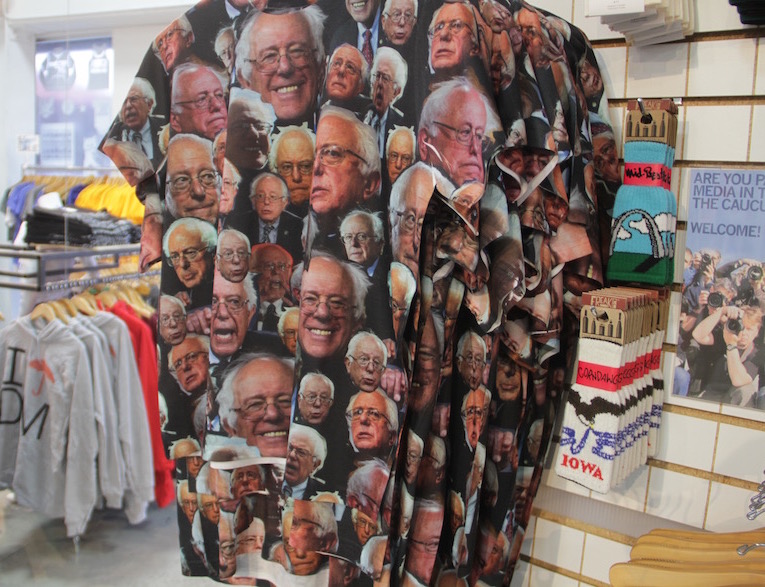 Dennis Goldford, a Drake University political scientist and frequent commentator on Iowa politics, said there is little reason for Iowans to associate Sanders’ persona at the microphone with his Jewish identity. Unlike some other prominent Jewish politicians, Sanders does not wear his religion on his sleeve. And Sanders’ Brooklyn accent does not scream “Jewish” in Iowa the way it might elsewhere.

“His Jewishness is relatively invisible to Iowans at large,” said Goldford, a member of Temple B’nai Jeshurun, a Reform congregation in Des Moines. “In various venues it just doesn’t come up, and he doesn’t mention it.”

Perhaps the only time it has come up in Iowa was after a speech hosted by the Jewish Federation of Des Moines in September. Goldford, who moderated the event, recalled that an audience member asked Sanders “what impact his Jewishness has on his political views.” Goldford sensed that the question caught Sanders off-guard.

“He did not seem to be uncomfortable,” Goldford said. “But he seemed not used to answering a question like that.”

With the Iowa caucuses less than two weeks away, Sanders, backed by an extensive grassroots campaign, is riding a groundswell of Democratic support in the state. Last week, a Des Moines Register poll showed Democratic front-runner Hillary Clinton leading Sanders by only 2 percentage points. Another poll, by Quinnipiac University, placed Sanders ahead 49–44, a surprising tally considering the senator was suffering a 9-point deficit as recently as December.

“Especially in Iowa, people tend to stick with the issues and topics of the day,” Ewing said. “[Sanders’s] faith has never come up in any conversations I’ve had, and I’ve talked with a lot of folks.”

At Maccabee’s, a kosher deli in Des Moines, the proprietor and local Chabad rabbi, Yossi Jacobson, riffed on Sanders’s growing appeal. He showered the senator with effusive praise — “Hillary’s ‘been there, done that,’” — and asserted that Sanders’ religion does matter, regardless of what Iowans, or even Sanders himself, might believe.