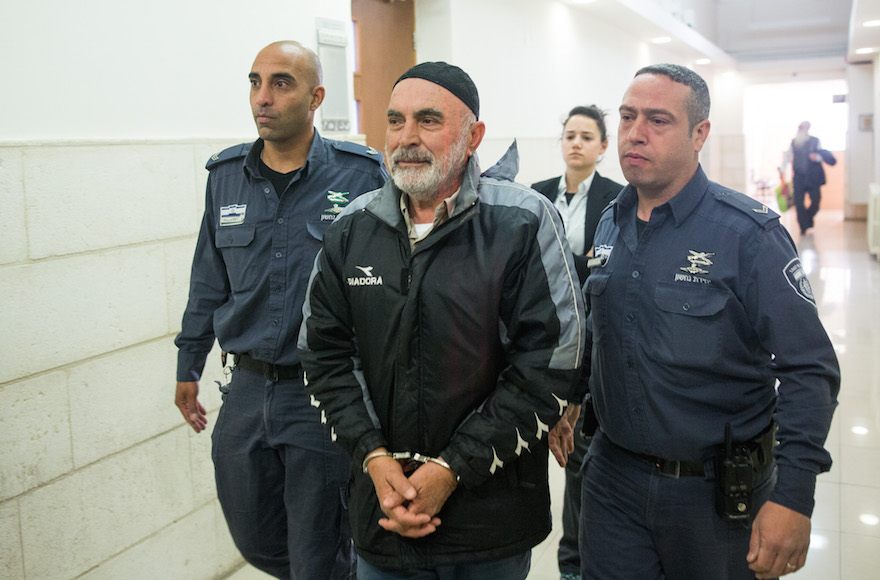 TEL AVIV (JTA) – The footage, aired on a respected Israeli news show, appeared damning: a left-wing activist, driving through the West Bank, casually describing how he has turned Palestinian real estate brokers over to Palestinian authorities, subjecting them to a possible death sentence.

Asked what happens to the Palestinians involved in the deals he admitted to setting up, Ezra Nawi says the Palestinian Authority “captures them and kills them.” Selling land to Jews is a capital crime under Palestinian law.

Nawi, a Jewish-Israeli who is well-known for protesting Israeli settlement in the West Bank, was arrested shortly after the Jan. 8 broadcast of the investigative program “Uvda” as he was seeking to board a flight out of the country. Two other activists also were arrested – Guy Butavia, also a Jewish-Israeli, and Nasser Nawajah, a Palestinian field worker for the human rights group B’Tselem. Nawi and Butavia were released to house arrest Sunday, while Nawajah was released the next night.

The “Uvda” footage has caused a stir in Israel and heightened already mounting tensions between activists on the left and right. Left-wing groups, already inflamed by a proposed NGO transparency law they say is aimed at undermining them, have rallied to Nawi’s defense, claiming the video and the undercover operation that produced it are merely the latest installments in a broad effort to silence the government’s liberal critics.

To critics of the left, the footage has been taken as further evidence of their hypocrisy – campaigning for Palestinian rights but prepared to sacrifice individual Palestinians.

“This is a classic example of how rigid ideologists become immoral and subvert the ideals that they set out to uphold,” said Yossi Klein Halevi, a senior fellow at the Shalom Hartman Institute and an opponent of the proposed NGO law. “This is the smoking gun for the hard left – not only Nawi’s admission, but the outrageous response of his comrades, the outrageous way his colleagues stood by him and lashed out at the critics.”

The footage was captured in the summer of 2014 by Ad Kan, a pro-settler group that aims to conduct undercover stings of human rights groups. In it, Nawi admits to luring sellers into deals only to turn them over to the Palestinian authorities, where they could potentially face a death sentence.

In one scene, Nawi is seen impersonating a broker in a meeting with a Palestinian interested in selling land to Jews. Nawi is then seen seeking help from two fellow activists – Butavia and Nawajah – as well as a Palestinian intelligence official in alerting Palestinian forces.

“What was exposed deserves all condemnation,” said Amir Fuchs, head of the Defending Democratic Values project at the Israel Democracy Institute. But, he added, “It’s clearly part of the long campaign of delegitimization, trying to portray human rights organizations as moles, foreign agents, enemies.”

To date, no major Israeli human rights group has bowed to the prime minister’s demand. Instead, several have rallied to Nawi’s defense. Outside a Jerusalem police station where Nawi and the others were being held, protesters gathered last week with signs bearing their photos. The California-based Jewish Voice for Peace, a group that supports the anti-Israel Boycott, Sanctions and Divestment movement, sent out two emails in the last week on Nawi’s behalf.

Hagai El-Ad, the executive director of B’Tselem, told JTA that the video of Nawi was produced by a group committed to smearing Israel’s human rights community and showed no evidence of wrongdoing. The land broker Nawi meets with in the video, an Arab-Israeli, is alive and well.

“There’s missing context,” El-Ad said. “They got a crooked view of the reality in the South Hebron Hills, where there are Palestinians fighting against all odds to keep their land. This is promotional work by a group that views leftist activists as if they’re hostile.”

The “Uvda” report comes amid a continuing effort to restrict the activity of left-wing groups. In December, Israel’s government barred Breaking the Silence, an organization of military veterans that draws attention to alleged Israeli military abuses in the West Bank, from appearing at schools or army bases.

In December, the right-wing Im Tirtzu launched a campaign accusing left-wing groups of being foreign moles. And on Monday, the Knesset is expected to advance a bill that would require some Israeli nongovernmental organizations to publicly declare their foreign government funding, despite a groundswell of opposition from American Jewish groups.

Butavia, one of the arrested activists, sees his detainment as part of that effort. Filmed as policemen escorted him in a courthouse, Butavia was unrepentant.

“This is entirely a political arrest,” he said in a video released by ActiveStills, a left-wing photographers’ collective. “Its whole goal is to prevent our activism for human rights in the territories, and against the crimes and criminals of the occupation. They won’t succeed in breaking us.”