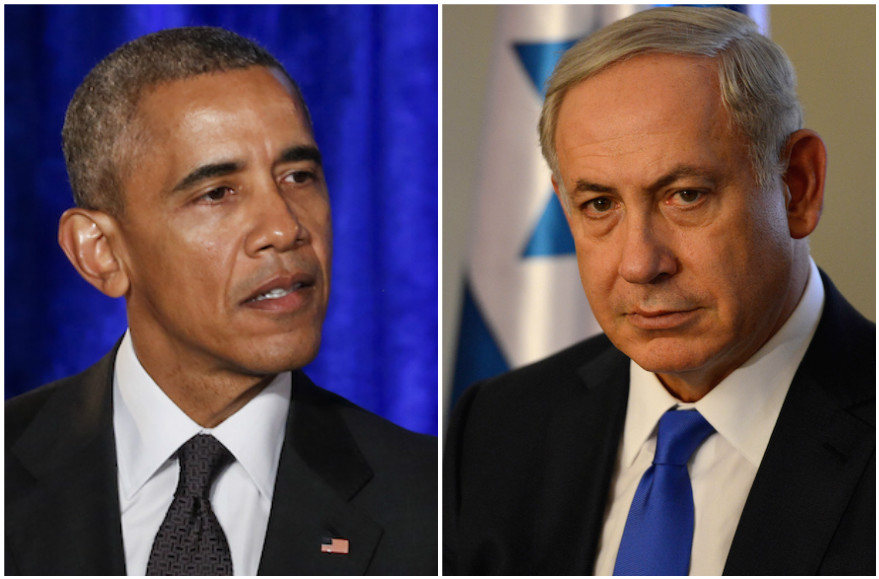 President Barack Obama spoke Wednesday evening at the Israeli embassy in Washington, D.C., to mark International Holocaust Remembrance Day. He exchanged warm greetings with Ambassador Ron Dermer, who noted that the speech was unprecedented. (Folks present said the last time a president visited the embassy was in 1995, when Bill Clinton signed the condolence book after Israeli Prime Minister Yitzhak Rabin’s assassination — but there was no speech.)

The greetings seemed genuinely warm. The embassy speech is the culmination of a series of events: last November’s Washington, D.C., summit between Obama and Israeli Prime Minister Benjamin Netanyahu, more recent meetings between Netanyahu and top Obama aides, a revolving door of senior U.S. officials visiting Israel and accelerated talk of a generous new U.S. defense assistance package to Israel. The cumulative effect is to make it clear that the leaders are moving beyond last year’s loud arguments over the Iran nuclear deal and bitterness resulting from the collapse in 2014 of U.S.-convened Israeli-Palestinian peace talks.

But here’s the thing: Even in comity, profound differences are evident in how each administration views the world. Consider the messages Obama and Dermer conveyed in their respective speeches Wednesday. Obama appealed for universal tolerance; Dermer heralded the triumph of Jewish self-defense.

Here’s Obama, and note the subtle nod to the ethnic and religious divisions sowed by Republican presidential candidate Donald Trump:

Even as the Holocaust is unique, a crime without parallel in history, the seeds of hate that gave rise to the Shoah — the ignorance that conspires with arrogance, the indifference that betrays compassion — those seeds have always been with us. They have found root across cultures, and across faiths, and across generations. The ambassador mentioned the story of Cain and Abel. It’s deep within us. Too often, especially in times of change, especially in times of anxiety and uncertainty, we are too willing to give into a base desire to find someone else — someone different — to blame for our struggles …

And so we’re called to live in a way that shows that we’ve actually learned from our past. And that means rejecting indifference. It means cultivating a habit of empathy, and recognizing ourselves in one another; to make common cause with the outsider, the minority, whether that minority is Christian or Jew, whether it is Hindu or Muslim, or a nonbeliever; whether that minority is native born or immigrant; whether they’re Israeli or Palestinian. It means taking a stand against bigotry in all its forms, and rejecting our darkest impulses and guarding against tribalism as the only value in our communities and in our politics.

Now hear out Dermer, who spoke before Obama, but who appeared to anticipate the president’s take on the Holocaust, and who then articulated his own view:

Seventy-one years after the liberation of Auschwitz, we still try to make some sense of the Holocaust. We still try to learn some lesson that will shine light in the darkness. For some, the Holocaust represents the nadir of man’s inhumanity to man — and its primary lesson is to be ever vigilant against racism, xenophobia and intolerance. For others, the Holocaust shows what can happen when extremist ideologies come to power — and its primary lesson is to always safeguard the cornerstones of a free society that protect the rights of all.

For me, the Holocaust was the attempt to wipe out the Jewish people — and its primary lesson is for the Jewish people to never be powerless against our enemies. That is why like many Jews, I take great comfort in the rebirth of a sovereign Jewish state in our ancestral homeland, in the Jewish people once again having a voice, a refuge, and most importantly, the power to defend ourselves.

READ: Netanyahu says Obama speech at embassy is a sign of strong ties
Then there is the way each man perceives the Righteous among the Nations, four of whom were honored during the ceremony. Obama casts righteous gentiles who saved Jews from the Holocaust as embracing a universal humanity; Dermer lauds them for their particular devotion to Jews.

And may we all strive to live up to their noble example, to be the Lamed Vovniks of our generation, to do our part to sustain each other and to embrace the humanity that we share, and in so doing, save our world. May the memory of the lost be a blessing. And as nations and individuals, may we always strive be among the Righteous.

You know, the Jewish people are an ancient people with a very long memory. We forget neither our most wicked enemies nor our most righteous friends. Tonight, the names of your four esteemed relatives join the names of Oscar Schindler, Raoul Wallenberg and other Righteous Among the Nations to become a permanent part of our nation’s heritage, to be remembered by our people for generations and generations to come.

So, is the U.S.-Israel relationship doomed? Not at all. In fact, eight years into the Obama-Netanyahu era, what both sides might finally be recognizing is that the other is different, and you know what, it’s all good: Israel is not a little America, America is not Israel writ large. Each has its own political and social ethos.

The triumph of the evening may be that Dermer was able to identify how Obama — the “for some” and the “for others” in his remarks — understands the Holocaust, and yet not dismiss his view. Dermer’s particularist understanding of the Holocaust as necessitating Jewish self-defense does not diminish Obama’s call for universal tolerance. The two views can coexist.