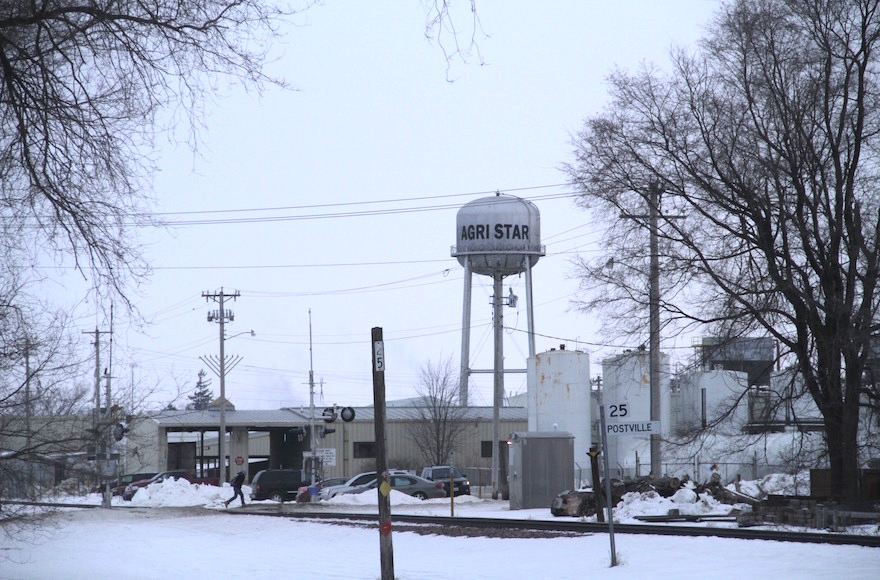 The largest kosher slaughterhouse in the United States is located in Postville, Iowa and has been renamed AgriStar. (Jake Tapper)
Advertisement

POSTVILLE, Iowa (JTA) – On a frigid evening late last month, Aron Schimmel, the Chabad emissary here, sat in a deli at the back of the glatt kosher supermarket sipping from a can of Israeli mango juice. A sign posted next to the entranceway boasted of the presence of Jewish life in this working-class town of 2,220 set amid the rolling cornfields of northeastern Iowa. The state home this week to the nation’s first presidential contest, the Iowa Caucus.

“Postville might be at the edge of the world, but you can still buy tzitzis, yarmulkas, shirts, shells and more!” read the sign, referring to several Jewish ritual garments.

It is testament to the stability the community has recovered since 2008, when a massive federal immigration raid at the former Agriprocessors meatpacking plant — then the largest kosher slaughterhouse in the United States — sent the town into a tailspin. The crackdown led to the arrest of nearly 400 undocumented Guatemalans and Mexican workers, sent Agriprocessors into bankruptcy, led to the arrest and conviction of the company’s longtime CEO Sholom Rubashkin, and left in doubt the future of Postville’s Jewish community. (The plant employed some 90 percent of Postville’s Jewish adults before the raid.)

“The community was getting smaller, and people were moving away,” said Schimmel, who has lived in Postville since 1988.

For years Rubashkin, a member of the Chabad-Lubavitch movement, had provided regular cash infusions to prop up the local synagogue, Jewish elementary school and yeshiva. When he was convicted on 86 counts of fraud and sentenced in 2010 to 27 years in federal prison, many of the community’s Jewish families picked up and left.

The Canadian billionaire Hershey Friedman, of Montreal, purchased the meatpacking plant in 2009 and rebranded it as Agri Star Meat and Poultry. Agri Star now employs the vast majority of Postville’s remaining Jews, with most of them — including Schimmel — serving as Jewish ritual slaughterers, or shochtim. (Friedman refused to comment for this story, but spoke recently with JTA.)

The months “between Rubashkin and Friedman were shaky, all the time,” said Matti Brandwein, an Israeli who came here 15 years ago to work as a ritual slaughterer at the plant, and two years ago opened the community’s second synagogue, inside a storefront on Postville’s main drag. “It was a big mess. But thank God it’s back to normal. 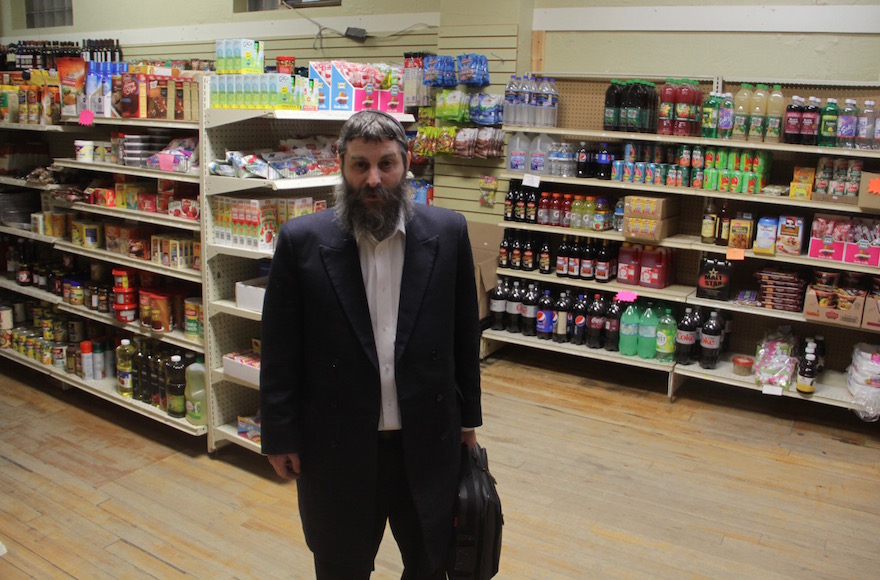 Or at least it is a new normal.The Jewish community is noticeably smaller — there are about 50 Orthodox Jewish families in Postville, about half as many as there were at times before the raid — and the purse strings are tighter. (Statewide, Iowa is home to some 6,000 Jews, with about half of them living 150 miles west of Postville, in Des Moines.)

Before the raid, Postville  “was Rubashkin’s town,” Schimmel said. “Now it’s a free market. It looked like a rough separation, but things became better.”

Still, the financial climate for the Jewish community has shifted to one of greater self-reliance as it cobbles together its own funds for synagogue upkeep and social events. After Friedman purchased the plant, the community petitioned him to kick -in the same financial support for the Jewish school as had Rubashkin, whose annual contribution had rendered it tuition-free. Friedman initially refused to bankroll the school, but he eventually agreed to cover its annual shortfall of about $100,000. Families now pay tuition on a case-by-case basis.

In 2013, Friedman funded the construction of a new dormitory for Postville’s yeshiva, and Leigh Rekow, Postville’s mayor for the past eight years, said Agri Star also makes regular donations to the local fire department.

Life post-Agriprocessors hasn’t always been easy, though: Schimmel had to close the Judaic library he had opened, with Rubashkin’s support, in 2005. Meanwhile, the Chabad emissary has been trying for years to raise money to revive the 7,000-volume library and build a community center.

Even with Rubashkin serving out his sentence at a medium-security prison in Otisville, New York, his presence still lingers in Postville. Rekow said Rubashkin’s brother and brother-in-law continue to live in town and work at the plant. On the Sabbath and Jewish holidays, the Lubavitch congregation recites a blessing for its former patron — a plea that he receives early release.

“Everybody knows he did something wrong,” Schimmel said, “but the punishment is disproportionate to this type of crime.”

Meanwhile, relations between the plant and the wider Postville community have been similarly positive — if a bit distant — in recent years. Rekow said he hasn’t seen Friedman in Postville in at least a year, but noted that Agri Star hired a local (non-Jewish) man, David Van Kampen, to serve as the plant’s chief operating officer.

These days, Agri Star employs 700 people — just over 30 percent of Postville’s total population — Rekow said, down from around 900 employees at the time of the raid. About 100 of the current employees are Somali immigrants who migrated from nearby Minnesota and Wisconsin to help mitigate the labor shortage that followed the Agriprocessors raid.

Abraham Sharif, who owns a Somali grocery across from Brandwein’s synagogue and moonlights as a beef cutter at Agri Star for $12 an hour, said he has little interaction with his Jewish neighbors, even the shochtim who work alongside him on the plant floor. Five other Somali plant workers talking together at the local grocery store counter echoed those sentiments.

Gary Catterson, the pastor at Community Presbyterian Church — his maternal grandmother was Jewish, and on several occasions he has worn tefillin provided by yeshiva students — said he wished the Agri Star owners had made more of an effort to get to know the community in which they operate.

“Since the new ownership has taken over, there’s been so little news from the plant,” Catterson said.

Then again, he added, perhaps no news is good news.