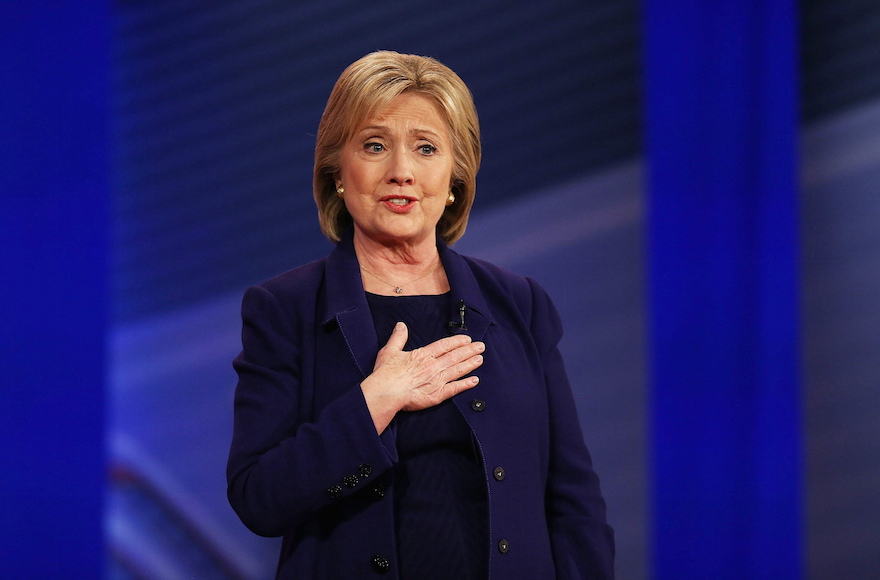 A long-dead Hasidic rabbi reached across the centuries and let Hillary Rodham Clinton speak candidly about belief and self-doubt.

That, more or less, is the takeaway of the Conservative rabbi who elicited Clinton’s celebrated response at a town hall Wednesday in New Hampshire.

In a telephone interview with JTA Thursday, Rabbi Jonathan Spira-Savett, 49, described what led him to his now famous question about balancing humility and ego, and why Clinton was grateful to him for it.

Spira-Savett of Temple Beth Abraham was one of seven Nashua, New Hampshire, clergy who last year launched a plan to draw candidates to forums on faith and ethics, modeled on the one hosted in 2008 by evangelical Pastor Rick Warren featuring then-candidates Barack Obama and John McCain.

There were no takers, which the rabbi lamented in an Op-Ed a few weeks ago in the New Hampshire Union Leader, but he saw an opportunity when he was able to join Wednesday night’s forum in Derry.

He wanted Clinton or her rival, Jewish Sen. Bernie Sanders, I-Vt., to speak about faith, ethics and the presidency, but he also, as he put it in his Op-Ed, “would let the candidates know the public does not expect them to be perfect. That we understand they have gaps of knowledge and even judgment, worth naming and working on in the open – and still have the kind of excellence we seek in the president.”

Spira-Savett rabbi mulled how to pose the question. “When you ask a question like that, or any question, you never know whether you’ll get an authentic response or a canned response,” he said.

READ: The Internet loves Hillary’s response to a question from a rabbi on CNN

One congregant, a writer, advised that framing the question as one from Jewish lore was likelier to get a candid response. “Give it a vividness and Jewishness,” Spira-Savett said the congregant told him.

That’s when he remembered the sayings of Rabbi Simcha Bunim of Peshishcha, a Polish Hasid who lived in the late 18th century and early 19th century — in particular, the teaching about the two pockets.

So his moment came; CNN moderator Anderson Cooper introduced Spira-Savett, and he related the teaching to Clinton. 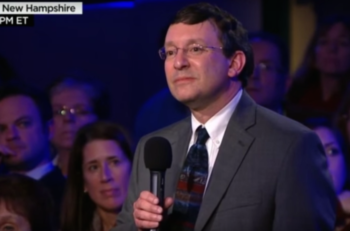 “Every person has to have two pockets and in each pocket they have to carry a different note And the note in one pocket says the universe was created for me. And in the other pocket the note says I am just dust and ashes,” he said.

Then he asked: “How do you cultivate the ego, the ego that we all know you must have, a person must have to be the leader of the free world, and also the humility to recognize that we know that you can’t be expected to be wise about all the things that the president has to be responsible for?”

Clinton appeared caught off-guard, but after a few hems and haws, warmed to the question.

“I don’t know that there is any ever absolute answer, like, ‘OK, universe, here I am, watch me roar,’ or, ‘Oh, my gosh, I can’t do it, it’s just overwhelming, I have to retreat,’” she said. A measure of the candidness was evident in how she compared herself — unfavorably — with her husband, former President Bill Clinton.

“You know, I never thought I’d be standing on a stage here asking people to vote for me for president,” she said. “I always wanted to be of service. I met my husband, who was such a natural, knew exactly what he wanted to do.”

Hillary Clinton ultimately countered with her own teaching, a Jesuit reading of the Christian parable of the prodigal son.

“Be grateful for your limitations,” she said. “Know that you have to reach out to have more people be with you, to support you, to advise you, listen to your critics, answer the questions.”

She was impressed enough to return to the Bunim tale near the close of the town hall, saying of her closest friends: “They deal with the universe in one pocket and the dust and ashes in the other.”

Afterwards she asked to meet the rabbi. Clinton — for years assailed by her opponents as programmed, scripted and aloof – suggested to Spira-Savett that she relished being caught off-guard.

“I think what she said was that it takes a real organic circumstance — anything a politician says would be spun as manipulative, if she spoke about her faith without prompting, it would be seen as an ulterior motive,” he said.

Spira-Savett, a St. Paul, Minnesota native who moved to Nashua seven and a half years ago, has heard from friends and strangers far and wide since Wednesday night. The most rewarding contacts, he said, are from students at a Solomon Schechter school in Long Island where he taught American history from 1995-2000.

“Many of my former students posted excited and proud remarks on Facebook,” he said. “To know they were connected, to politics and Judaism, was so special to me.”