When Ted Cruz slams Trump for ‘chutzpah,’ should Jews be offended? 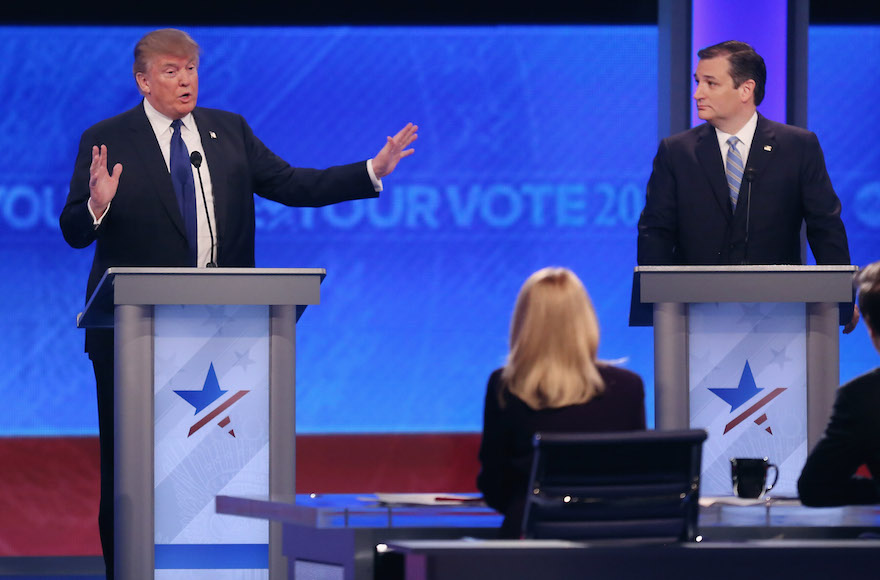 Ted Cruz, the Texas Republican senator running for president as an anti-establishment maverick, has once again been accused of making Jews collateral damage in attacks on his insider rivals.

Cruz’s accusers detected the whiff of anti-Semitism in his broadsides against neoconservatives and his mocking of real estate magnate Donald Trump’s “New York values.”

Now, he’s getting scored for his use of the word “chutzpah.”

For Cruz, “New York” is another way of saying “Jewish.”

At an event in New Hampshire, Cruz, the Republican Iowa caucuses winner, was asked about campaign money he and his wife borrowed from Goldman Sachs. Cruz, asserting that Trump had “upward of $480 million of loans from giant Wall Street banks,” said: “For him to make this attack, to use a New York term, it’s the height of chutzpah.” Cruz, pausing for laughter after the phrase “New York term,” exaggerated the guttural “ch” to more laughter and applause.

But “chutzpah,” of course, is not a “New York” term. It’s a Yiddish — a Jewish — one. And using “New York” as a euphemism for “Jewish” has long been an anti-Semitic dog whistle.

Chutzpah is a Yiddish word, so a “New York term” means one inflected by a dialect associated with Jewish immigrants and their descendants. And that can also only mean that Jewish values — sorry, New York values — are inimical to the good conservatives of the American heartland.

Over here at JTA, I’m not so sure.

True, Cruz was talking about Wall Street — a place that often features in conspiracy theories about Jews. And true, he played up the foreign-sounding pronunciation of “chutzpah” for laughs.

But what he called out Trump for isn’t connected to any discernible anti-Semitic stereotype. He simply accused his rival of audacity — and used a popular Jewish term for boastfulness to do it.

If anything, he honored Jewish perspicaciousness by invoking our linguistic tradition to make his point. And he’s far from alone among politicians in using the word.

As my colleague Daniel Treiman recently pointed out — citing President Barack Obama, Vice President Joe Biden and Mitt Romney — “chutzpah” is becoming as familiar in election years as paeans to Iowa ethanol and the hardy independence of Granite Staters. In fact, the last time Cruz used the term, Treiman noted, was to lambaste Obama for presuming to speak to Jews on Jewish values.