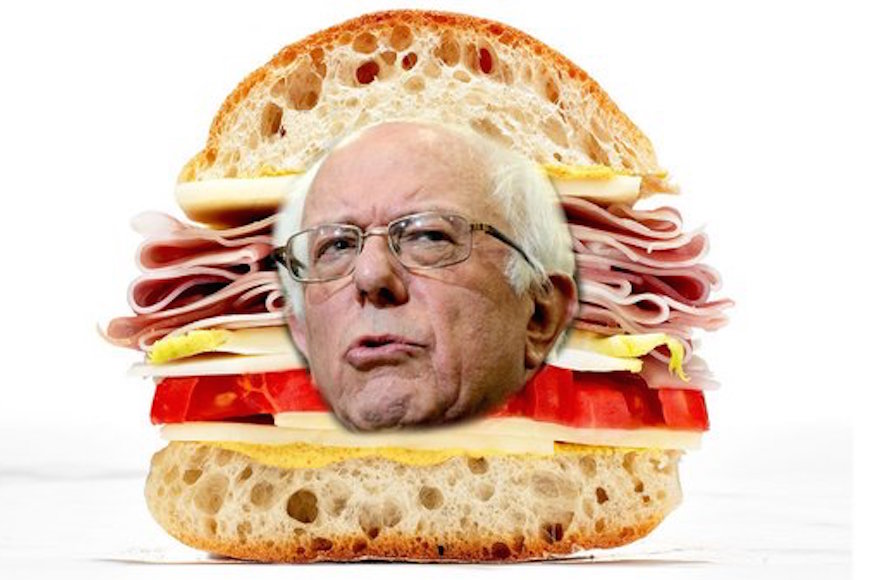 and now I am picturing a Bernie Sandwich. It’s weird. https://t.co/uxv5wYmuG8

The connection between Sanders’ new status as the first Jew to win a presidential primary and the Jewishness of the deli sandwich was not lost on the Twitterverse.

Chris Hayes just referred to “Bernie Sandwich,” which I believe you can now get at Carnegie Deli. — James Poniewozik (@poniewozik) February 10, 2016

Some had fun imagining all of the possibilities that a “Bernie Sandwich” presents.

Is the Bernie Sandwich going to get on the board instead of the Larry David? pic.twitter.com/FOgaLoHNkh — joshingstern (@joshingstern) February 10, 2016

Others seized the opportunity to criticize Sanders’ policy proposals.

One Bernie Sandwich is free to every household per year, you just pay an extra $400 in tax to the federal gov… pic.twitter.com/vMt1vPMaLP — Andre Walker (@andrejpwalker) February 10, 2016

The Internet was also suddenly buzzing with comments on Sanders’ Jewishness after he made Jewish history.

@davidfrum Harry Golden on Goldwater: “I always knew the first Jew to get a presidential nomination would be an Episcopalian.”

A country that turned away Jewish refugees fleeing Europe from the Holocaust…could conceivably elect one for the first time. Baruch HaShem — mo dameron (@spideymo) February 10, 2016

Interesting: Bernie Sanders is the first Jew ever to win a presidential primary. In fact, the first ever primary winner to not be Christian