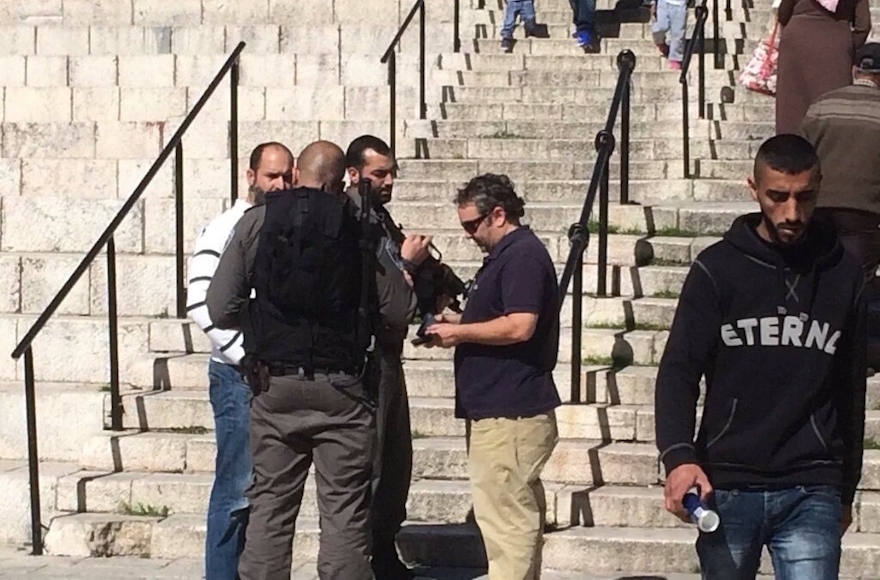 Booth and a colleague were detained at the Damascus Gate outside the Old City on accusations of “incitement” and released an hour later after being questioned at a nearby police station, police said.

Booth and the newspaper’s Palestinian West Bank correspondent were interviewing passers-by at the Damascus Gate when they were arrested.

A civilian complained to police after he heard one of the interviewees tell Booth she could convince some of the Palestinians in the area to demonstrate against the police if he paid them, a police spokesman told the Times of Israel.

“Freedom of the press is a supreme value in the Israeli democracy. Israel is doing its utmost to enable the foreign press to work freely, without any pressure,” the press office said in a statement. “We call upon the security forces and journalists to act with restraint and to avoid confrontations during these tense times. The GPO endeavors to prevent such incidents; we shall examine today’s events and draw the necessary conclusions.”

Israeli Prime Minister Benjamin Netanyahu asserted shortly after the incident that Israel is committed to a free press.

“We do not arrest journalists,” Netanyahu said at a news conference in Berlin with German Chancellor Angela Merkel. “The press in Israel is very energetic and free to say anything it wants.”

The Foreign Press Association of Israel slammed the police actions, saying it “protests in the strongest terms” the detention of the two journalists. The association called the allegation of incitement “an absurd accusation against a respected international news outlet.”

“We note that it comes in the context of heavy-handed tactics – including violent attacks – deployed in recent months by border police against foreign journalists and their Palestinian co-workers covering the unrest in Jerusalem and the West Bank,” its statement said. “We do not think it is coincidental that a baseless accusation of ‘incitement’ was made at a time when blanket accusations of bias are being leveled against the foreign press by Israeli officials and commentators.:

A spokesman for Israel’s Foreign Ministry, Emmanuel Nachson said, according to Haaretz: “This is a regrettable incident, casting an unnecessary shadow over the work of an excellent journalist.” The ministry “will ask the police for the necessary clarifications.”

Photos of police detaining Booth were posted by Washington Post reporter in Israel Ruth Marks Eglash and by Israeli media on Twitter moments after he was detained.