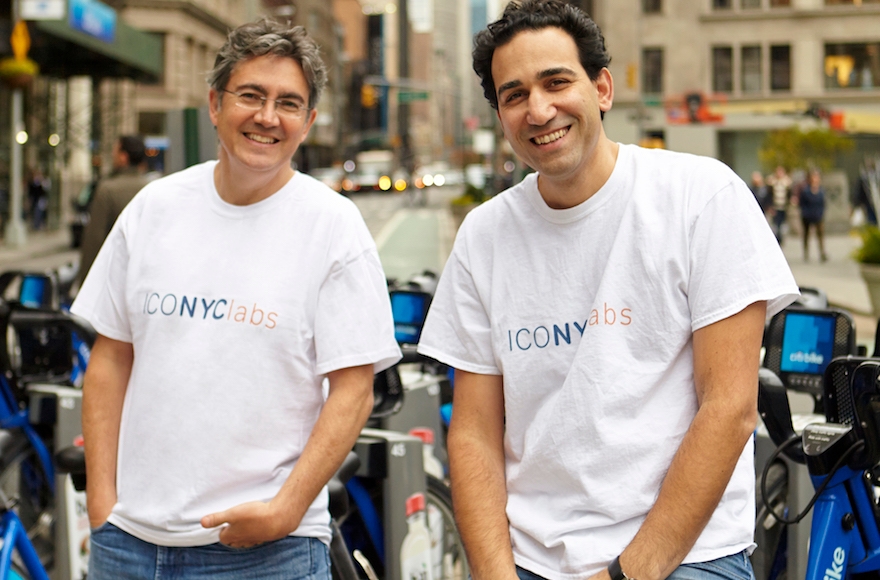 NEW YORK (JTA) — The hoodie-clad millennials tap furiously at their laptops. They’re perched on colorful couches, or sitting at long, communal tables, munching on Fruit Loops from the built-in dispenser in the open, subway-tiled kitchen.

In other words, AlleyNYC is your typical co-working space. There are plenty of international workers here, yet the space is quintessentially New York with its upscale, industrial look and “work hard, play hard” philosophy, complete with biweekly happy hours.

Its location in Chelsea, on the West Side of Manhattan, makes it a hub for local entrepreneurs, particularly those in the tech scene. That cachet made it the perfect home for ICONYC Labs, a new accelerator program that helps Israeli startups launch their businesses stateside.

Israel has earned a global reputation as “Start-Up Nation” for its lively tech scene — Israel is home to nearly 7,000 high-tech companies, and nearly 80 percent of those are startups, according to a report from the business information firm Dun & Bradstreet. But despite its track record of innovation, Israeli startups often struggle with finding local investors. Additionally, Israeli deals generally require entrepreneurs to cede a greater share of their companies than a typical American deal.

So a main goal of ICONYC Labs is to connect Israeli entrepreneurs with New York investors. Additionally, the program helps Israelis adapt their pitches and products to better appeal to American investors, who typically have a longer decision-making process than their Israeli counterparts.

“In America, it’s about building relationships over time, but that’s not something that’s in Israeli DNA,” says ICONYC co-founder Eyal Bino. “It’s definitely a mindset we are trying to change with our founders, and it’s not always an easy task.”

But this incubator program isn’t just about generating money — through the shared workspace, the program also embeds Israeli startups in the city’s tech scene.

“While they’re here, they’re mingling with the other entrepreneurs in the kitchen,” says co-founder Arie Abecassis. “They want to be here and get to know New York, and one of the goals of this program is to help them exponentially expand their social network in tech.”

Other goals include providing mentorship, assistance with media relations and branding, as well as operations support on logistics like immigration, banking and accounting. In addition to these services, ICONYC Labs provides the startups with $20,000 and office space in AlleyNYC in exchange for a small equity stake in the firms.

ICONYC Labs’ first cohort, which began last April and finished the end of October, consisted of Myndlift, a mobile health solution targeting those who suffer from ADHD; Flux, a smart agricultural product enabling water-efficient growth of food and plants; DandyLoop, a cross-promotional marketplace for independent online stores to gain traffic; Clickspree, an ad-tech firm focused on video engagement and return for brands, and Gaonic, a platform for businesses to monitor Internet of Things data.

While working with ICONYC Labs, the companies’ founders must spend at least a week each month in New York, although many stay longer. During the weeks they are all here, ICONYC hosts networking events and fireside chats with high-profile startup success stories. It also sets pitch meetings with potential investors and advisers.

“At the end of the program, they’ll have the ability to expand their business to New York and raise money here,” Bino said.

Going forward, the incubator will shorten the program to four months and accept companies on a rolling basis. Two startups began in January; three more will enter the program this month. 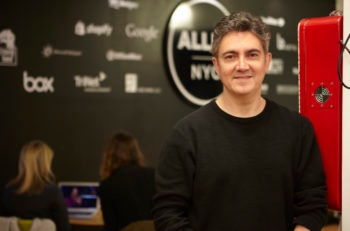 Arie Abecassis at co-working space AlleyNYC, which is home to ICONYC Labs. (Courtesy of ICONYC Labs)

ICONYC staffers sift through hundreds of applicants to select businesses to accept into the program — there’s no shortage, after all, of companies hoping to be the next Waze and make it big in the U.S. They put potential applicants through a serious vetting process, which includes outside experts assessing their business prospects and an investigation into their reputation in the Israeli startup community. They’re looking for companies that already have a viable product with the potential to scale in the United States, along with a committed team and a willingness to learn.

Bino, 40, and Abecassis, 49, are uniquely positioned to help Israeli companies acclimate to New York’s startup ecosystem. Both were born in Israel — Abecassis moved to the U.S. as a young child, and Bino attended college here and moved here for work a few years later.

When they met in 2014, Bino was working as a business development consultant for international startups in New York, and Abecassis was serving as a board member, adviser and investor for several startups. Bino tapped Abecassis to mentor some Israeli startups, and the two began discussing the specific needs of Israeli entrepreneurs in New York.

The pair saw a gulf between the growth potential of many Israeli startups — the talent and the ideas were strong — and their ability to connect with a wider variety of investors, and turn those connections into meaningful business opportunities.

One challenge facing Israeli entrepreneurs in New York is their products may not yet have an American following.

“We work extremely hard to help our founders prove their concepts in the U.S. markets, so they are worthy of funding from venture capitalists in New York,” Bino said. “The more traction our founders have, the better their story becomes.”

For Omer Rachamim, co-founder and CEO of DandyLoop, moving his business to New York was always the long-term plan because it’s a global hub e-commerce.

“ICONYC came along at just the right moment,” he said. “They helped us do a soft landing in the city, and really leveraged their connections in a way that helped me to be completely emerged in the startup community and the VC community within a few months. It’s like integration into the city on steroids.”

Since completing the program, DandyLoop, which is now incorporated in the U.S. and has an office in the city, has added advisers, investors and clients in New York.

“They see New York as the market where they can meet clients and investors as well as the big American corporations they want to do business with,” said Guy Franklin, founder of Israel Mapped in New York, which tracks the Israeli startup community.

Plus, in some significant ways, New York City is more culturally similar to Israel than Silicon Valley.

“There’s the food, the holidays,” Bino said. “Israelis may not be able to see themselves renting a house in the suburbs in California, but they could live on the Upper West Side.”