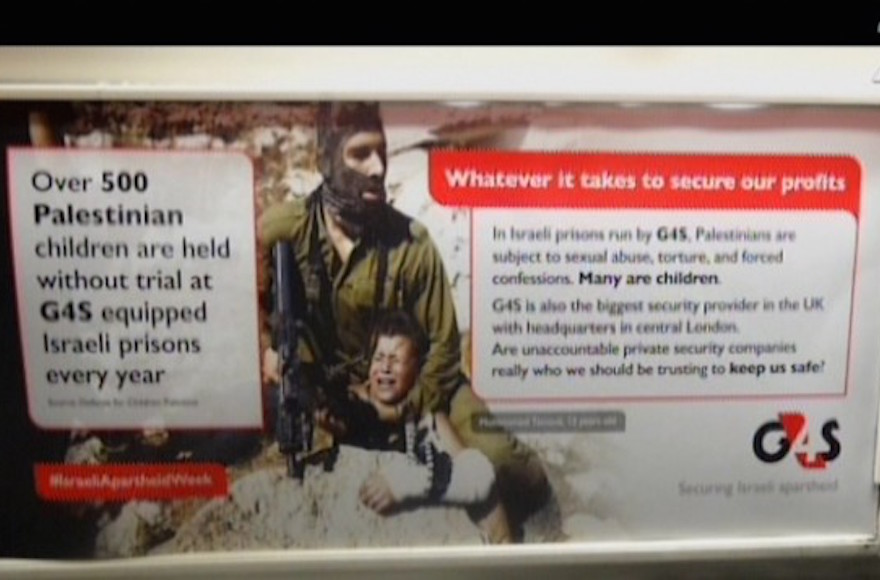 An anti-Israel advertisement posted on the British Underground in London, England, Feb. 22, 2016 (Screenshot from Channel 2)
Advertisement

(JTA) — Hundreds of posters in support of the Palestinians and calling Israel an apartheid state were hung in London’s Underground subway system.

The ads were being removed Monday, Israel’s Foreign Ministry said in a statement. Commuters first saw the signs during that morning’s commute after they were put up overnight.

Transport for London, which runs the subway system, told the London-based Jewish Chronicle that the ads were “unauthorized acts of vandalism” and would be taken down.

London Palestine Action, a pro-Palestinian activist group, claimed responsibility for the ads, saying they are part of the group’s Israeli Apartheid Week campaign.

Prime Minister Benjamin Netanyahu instructed Israel’s Foreign Ministry Director Dore Gold, who is in London for talks with his British counterpart, to demand the immediate removal of the ads.

Some of the ads call the BBC’s coverage of the Israel-Palestinian conflict biased toward Israel, while others are emblazoned with the headline “Apartheid is Great Britain.” The posters also claim that British-made arms were used to “massacre” Palestinians during Israel’s 2014 Operation Protective Edge against Hamas in Gaza.