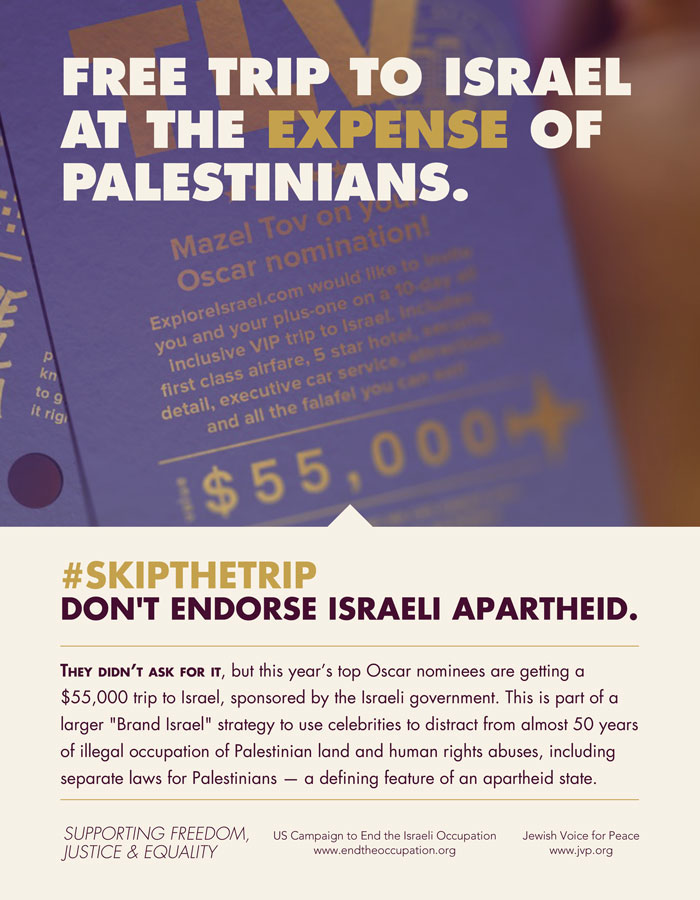 (JTA) — A full-page ad that calls on Oscar nominees to refuse a free Israel trip worth $55,000 offered in their Academy Award swag bags was published in the Los Angeles Times.

The ad, which says “Don’t endorse Israeli apartheid,” appeared Wednesday in the newspaper’s Calendars section days after the entertainment magazine Variety refused to publish the ad, sponsored by Jewish Voice for Peace, or JVP, a group that supports the Boycott, Divestment and Sanctions movement against Israel.

Co-sponsored by the US Campaign to End the Israeli Occupation, the ad has a top line reading “Free Trip to Israel at the Expense of Palestinians.”

The Israeli government is sponsoring the all-expenses paid, 10-day luxury travel pack with first-class air travel to Tel Aviv. The trip is included in swag bags for Oscar host Chris Rock and all nominees in the best actor/actress, best supporting actor/actress and director categories.

Variety initially accepted payment for the group’s ad, but then said it could not publish the ad since “it would need to have a softer tone.” JVP said in a statement it had asked for suggestions of “specific edits,” but was told “The topic is too sensitive at this time and we will not be in a position to add it to next week’s edition.”

“We’re glad the LA Times is running our ad,” Rebecca Vilkomerson, executive director of JVP, said in a statement issued Wednesday. “Censorship has no place in a serious publication, whether in ads or editorial content.”