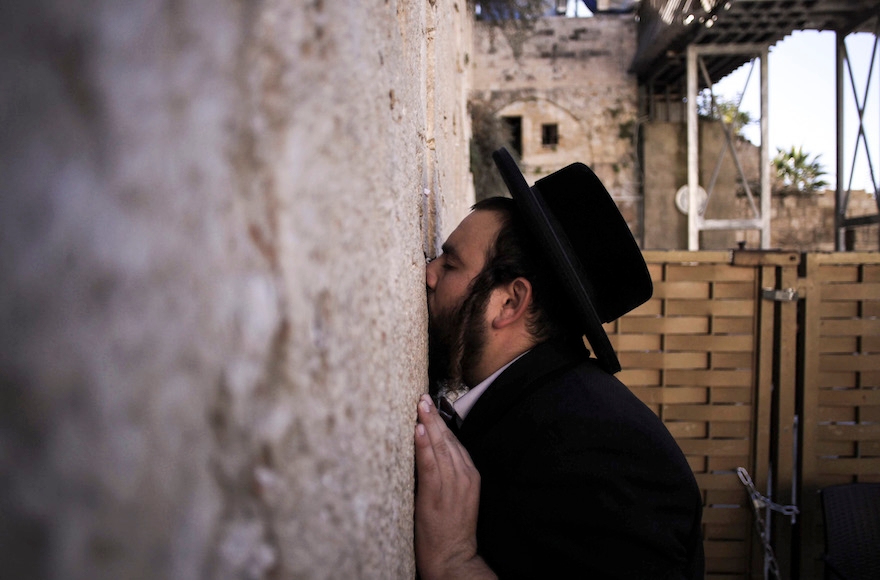 A haredi Jewish man praying at the Western Wall in the Old City of Jerusalem, Israel, Dec. 9, 2015. (Muammar Awad/Flash90)
Advertisement

In a letter sent Thursday to Israel’s chief rabbis, the haredi Orthodox Nebenzahl calls the movements “heretical religions.” They are “uprooting the religion and hurting everything holy to us,” he writes. “Their war against the religion is hard, and we must congregate and stand for the Jewish soul.”

And that’s exactly why he wants to give them more space at Judaism’s holiest prayer site.

In his letter, Nebenzahl endorses last month’s Western Wall compromise, which the chief rabbis oppose. The deal expands the wall’s existing non-Orthodox prayer section and creates a shared entrance with the Orthodox main section to its north. Women of the Wall, which holds women’s services in the Orthodox section, is to eventually move to the non-Orthodox section as part of the deal — which is backed by the Reform and Conservative movements, the Israeli government and the wall’s haredi managment.

Nebenzahl’s letter explains why the wall’s haredi rabbis agreed to a deal that Reform and Conservative rabbis also see as a victory. Accepting continued non-Orthodox control of the southern section, he writes, consolidates haredi control of the Orthodox section and locks the gates against a liberal takeover of the site.

The deal “guards the holiness in our prayer area on one hand, and on the other, directs them to what they had in the past, under the framework of ‘the lesser of two evils,'” Nebenzahl writes. “The Chief Rabbinate should work as much as possible to limit desecration, while making sure not to retreat at all from our prayer space.”

Essentially, Nebenzahl agrees with liberal critics of the deal, who argue it enshrines a haredi-dominated status quo. Original Women of the Wall has vowed to keep holding women’s services in the Orthodox section and refuses to recognize what it sees as a capitulation.

“A compromise speaks of two sides giving up and gaining, but the ultra-Orthodox Jews are giving up nothing at all,” writes Vanessa Ochs, a member of the group, in the Forward this month. “They get complete control of the Kotel. They will no longer have to tolerate the presence of Jews who do not pray as they do.”

Nebenzahl’s words will bolster this line of argument. It doesn’t help that he’s just the latest in a string of haredi leaders to insult Reform and Conservative Jews. Haredi Knesset members have compared them to clowns and the mentally ill, and said they should be “thrown to the dogs.”

But those politicians painted the Western Wall deal as a tragedy for haredi Judaism. For Nebenzahl — and the wall’s haredi authorities — it’s a relief.