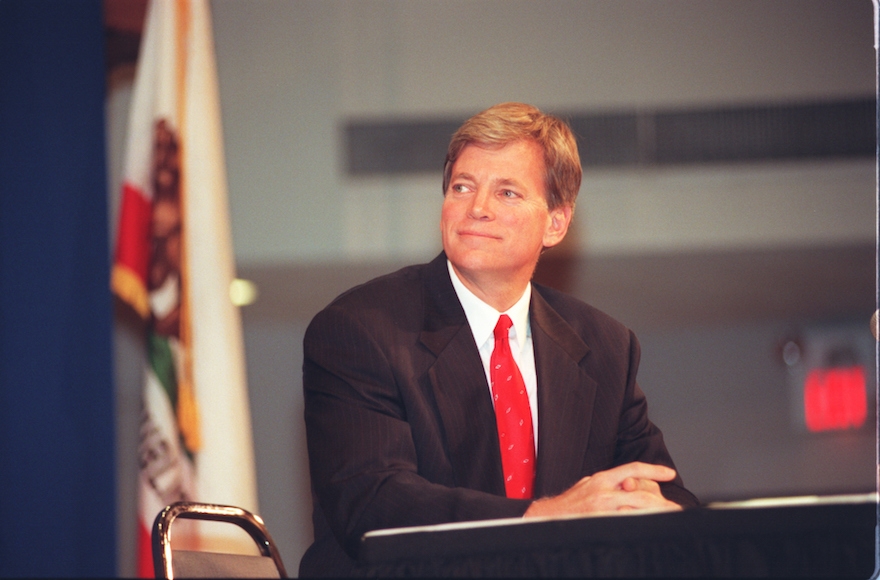 NEW YORK (JTA) — The Anti-Defamation League sent the presidential candidates a list of racists whose endorsements it said they should reject, a day after Donald Trump wavered in disavowing white supremacist David Duke.

The ADL issued the informational list on Monday, and said it had shared it with all the candidates along with information on the Ku Klux Klan and hate groups in general. Included on the list are Duke, a former KKK leader, and Nation of Islam head Louis Farrakhan, who on Sunday praised Trump for supposedly turning down money from Jews.

“We are providing information to all of the campaigns to ensure that they steer clear of these extremists and others who promote anti-Semitism, racism and white supremacy,” ADL CEO Jonathan Greenblatt said in a statement accompanying the list. “It is incumbent upon all candidates for office to reject and disavow any of these groups should they endorse or express support for their campaigns.”

Trump, the front-runner in the GOP race, on Sunday responded in contradictory ways to being endorsed by Duke and said on CNN, “Just so you understand, I don’t know anything about David Duke, OK?” Later in the day, the ADL said it would provide Trump and the other Republican and Democratic candidates with information on extremists and hate groups.

“Each individual identified on this list has publicly voiced support for a presidential candidate seeking higher office,” the ADL statement said, adding that names would be added “if other extremists should come out in support for any of the candidates.” Everyone so far included in the list has expressed some degree of public support for Trump.

Here is the full list as provided by the ADL:

David Duke, former Klan leader and a virulent anti-Semite, has asked his supporters to back Donald Trump. Duke has been active in the white supremacist movement for more than 40 years.

Andrew Anglin, who runs the neo-Nazi website, the Daily Stormer. Anglin’s site is filled with virulently racist and anti-Semitic articles.

William Johnson, the head of the white supremacist American Freedom Party, has created the American National Super PAC, which has paid for a series of robocalls supporting Donald Trump for president. The calls disparage minorities and promote white nationalism.

Kevin MacDonald, a notorious anti-Semite, and retired professor, has said that electing Donald Trump “may be the last chance for Whites to elect a president who represents their interests.” MacDonald is also a leader in the American Freedom Party.

Rachel Pendergraft, a spokesperson for the Knights Party, a Klan group based in Arkansas says that her groups use Trump’s candidacy as a “talking point” in feeling out potential recruits.

Louis Farrakhan, the racist and anti-Semitic leader of the Nation of Islam.