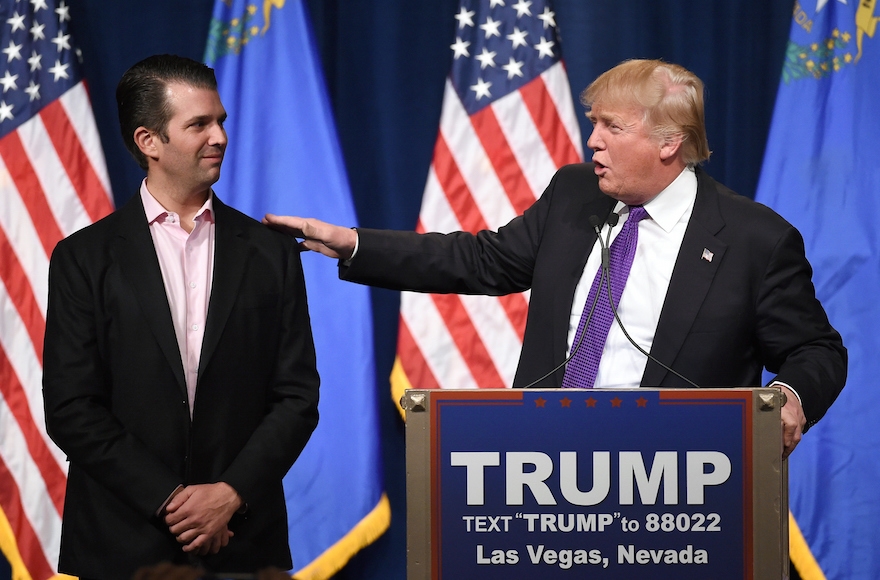 WASHINGTON (JTA) — A white supremacist who was given press credentials for a Donald Trump rally in Tennessee said he interviewed the presidential candidate’s son for his radio talk show.

James Edwards, who hosts “Political Cesspool,” a Memphis-based syndicated radio show, on Saturday joined the media pool at the Memphis-area airport where Trump, the Republican front-runner, held his rally. Edwards said he secured a 20-minute interview with Donald Trump Jr. and that he would broadcast it Saturday.

“As the media watches its grip slipping away, they have become desperate to paint Trump as a ‘racist,’” Edwards wrote Tuesday on his website. “It’s the same old, worn out card they always play.”

The campaign in a response said it did not vet every application for coverage and that the younger Trump, to his knowledge, did not give Edwards an interview. Trump’s family is heavily involved in his campaign.

“The campaign provided media credentials to everyone that requested access to the event on Saturday in Memphis,” spokeswoman Hope Hicks said in an email to JTA.

“There were close to 200 reporters in attendance and we do not personally vet each individual,” she said. “The campaign had no knowledge of his personal views and strongly condemns them. Donald Trump Jr. was not in attendance, and although he served as a surrogate for his father on several radio programs over the past week, to his knowledge and that of the campaign, did not participate in an interview with this individual.”

Over the weekend, Trump came under fire for not unequivocally disavowing David Duke, a former leader of the Ku Klux Klan who had endorsed Trump’s candidacy. Trump has since disavowed him.

Duke and other white supremacists and anti-Semites have appeared on the Edwards program over the years. Edwards regularly posts on his website the musings of Brother Nathanael Kapner, a Jewish convert to Eastern Orthodoxy who peddles conspiracies of Jewish control of markets, media and government.

On Wednesday, Edwards said he was not affiliated with the Trump campaign.

“In no way should anyone interpret our press credentialing and subsequent interview with Donald Trump, Jr. as any kind of endorsement by the Trump campaign,” he said on his website.

The Anti-Defamation League has said that Edwards gets mainstream media attention “in spite of his racist ideology and open affiliations with extremists.” The Southern Poverty Law Center lists Edwards as an extremist.

Tennessee was one of 11 states in contention on Super Tuesday. Trump won the state and six others.