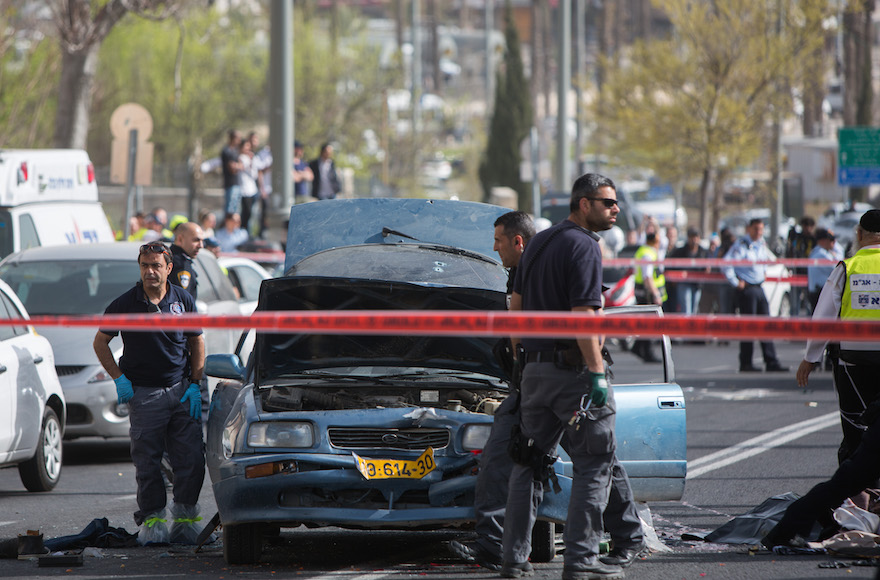 Israeli security at the scene where a man was seriously injured when a Palestinian attacker drove his vehicle into pedestrians, near the Old City of Jerusalem, Israel, March 9, 2016. (Yonatan Sindel/Flash90)
Advertisement

JERUSALEM (JTA) — A Palestinian bystander was seriously injured when two Palestinian residents of eastern Jerusalem allegedly tried to run over and then shoot police officers and civilians at a Jerusalem light rail stop.

The attack took place Wednesday morning near the Damascus Gate outside the Old City of Jerusalem.

The alleged assailants were shot dead in the vehicle during a shootout with police. They were later identified as Abd al-Malik Abu Kharub, 19, and Muhammad Jamal Al-Kaluti, 21.

The victim, about 50, from Beit Hanina in eastern Jerusalem, was caught in the crossfire between the attackers and police. He was taken to Hadassah Hospital on Mount Scopus with a gunshot wound to the head.

Police said the attackers used a sawed-off machine gun to fire on the light rail stop and then at the police who pursued them.

Prior to the attack, police believe the same gunmen fired on a crowded public bus in the Ramot neighborhood of Jerusalem, since the car they were driving was identified in both attacks. No one was injured in the shooting.

Also Wednesday morning, a Palestinian man tried to stab Israeli soldiers at a checkpoint near the Palestinian village of Salfit and the West Bank Jewish settlement of Ariel, the Israeli military said. Soldiers shot dead the would-be assailant during the attempted attack.

In addition, a Palestinian woman carrying a knife broke into the Kedumim settlement in the northern West Bank and ran after a resident, the Israeli military said. She was subdued by security forces and taken in for questioning.

The incidents came a day after three terror attacks in Jerusalem and central Israel that left an American tourist dead and at least 12 people injured.