How Hasid with knife in neck stabbed the terrorist back 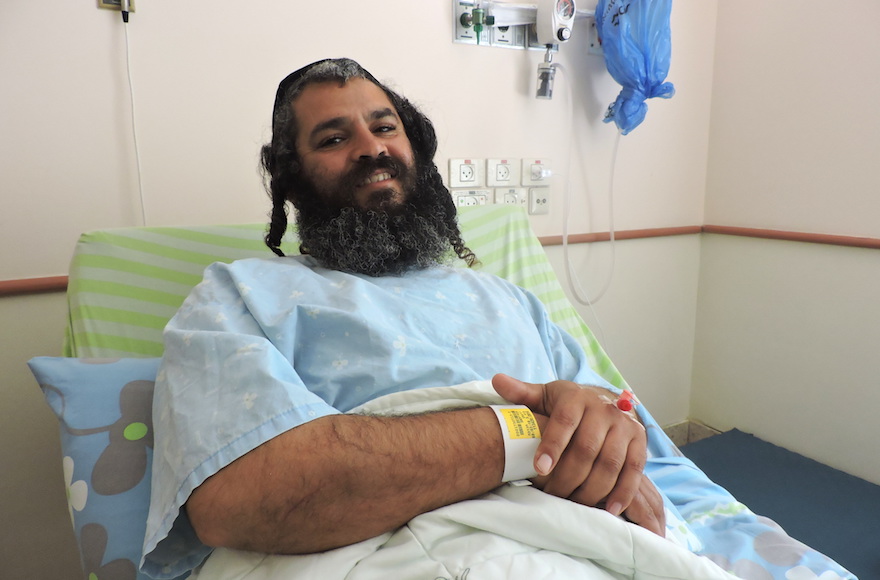 PETACH TIKVAH, Israel (JTA) — Only after Yonatan Azriaev grabbed the terrorist’s arms and threw him against a wall of soft drinks did he think he was about to die.

Azriaev, a member of the Breslov Hasidic sect, had been handing out religious pamphlets in the open-air market here when he stepped inside a shop at around 4 p.m. Tuesday hoping to give one to the cashier. Then he felt sharp blows to his back and shoulders.

Feeling like he was punched, Azriaev said he figured he was being attacked by someone who hated religious people. But then the shop owner started yelling, “It’s a terrorist! It’s a terrorist!”

Realizing he had been stabbed, Azriaev said he followed his instincts. He swiveled around, grabbed the attacker by the arms, swung him in a circle — “like you would with a kid,” he explained — and threw him against the wall. The attacker fell to the floor and Azriaev realized he was bleeding from the neck.

“I thought that was it, I wouldn’t live,” Azriaev told JTA in a bedside interview Thursday from Rabin Medical Center here, where he is recovering from his injuries. “I saw he was fighting with someone else. When I saw that, I said, ‘I won’t live.’ So, I said, he shouldn’t kill more people.”

READ: In Jerusalem, Biden criticizes those who fail to condemn terror attacks in Israel

After slamming the attacker against the wall, Azriaev’s memory went blank and he doesn’t remember what happened next. Some of the details remain unclear, but the story that has emerged sounds like something from an action movie.

Azriaev, still bleeding from his wound, pulled the knife from his own neck and stabbed his attacker, reportedly a Palestinian, who died a few minutes later. According to one report, Azriaev initially fled the store before returning to confront the attacker, but Israeli police were unable to confirm that, telling JTA only that some part of the incident occurred inside the shop and some part outside.

The next thing Azriaev remembers is leaving the store and paramedics rushing to help him. He was taken to the hospital and is due to be released Thursday.

Upon returning home, Azriaev said he plans to resume his mission in life: distributing the pamphlets.

“I thought, if there was one thing that could save me, it would just be that I would keep handing out these pamphlets,” he said. “That’s why God would save me.”

A burly man with a calm face engulfed by a bushy black-and-white beard, Azriaev, 35, has spent the past 16 years studying religious books. He lives with his wife and five children in Yavniel, a 4,000-person agricultural village near the Sea of Galilee in northern Israel. He served in a non-combat position in the Israeli army. He doesn’t exercise.

Azriaev joined the Breslov sect at 19 after reading one of its pamphlets. Today, he spends his mornings studying Torah and afternoons traveling around Israel distributing the glossy, palm-sized booklets with Hasidic texts to passersby. On Tuesday, he was distributing one titled “You will succeed.”

Azriaev’s story was one of the few silver linings in a day marred by tragedy. Two stabbing attacks and one shooting in three Israeli cities left 11 injured and one American tourist, Taylor Force, dead.

Every day, when he leaves home and when he returns, Azriaev thanks God for keeping him healthy and whole. He doesn’t take credit for saving lives on Tuesday — not even his own. He still doesn’t know exactly how he did it but says God, not him, deserves praise.

“I thank God for the miracle he did for me,” Azriaev said. “As much as someone takes care of himself, it’s not enough. What can save us is just a short prayer to God.”