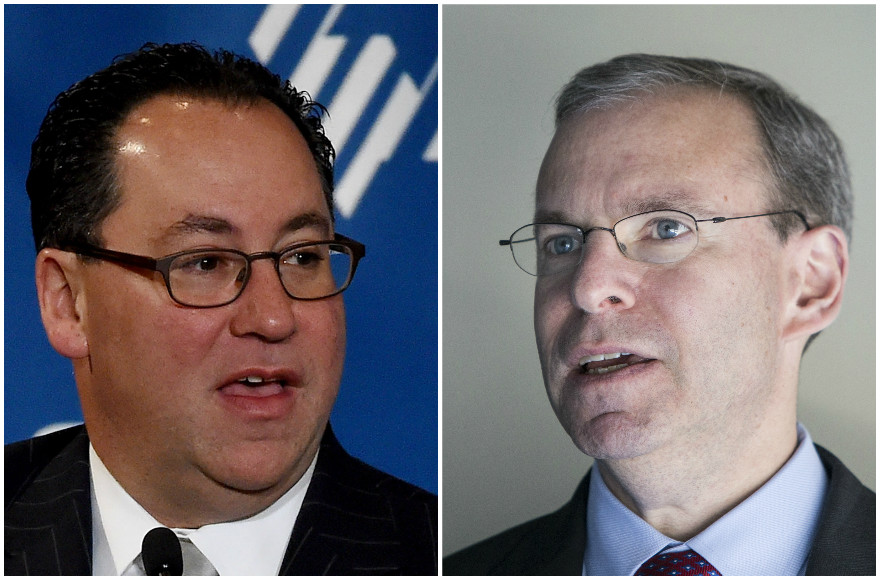 A common debate tactic is to try to get your opponent to express his most extreme views — revealing what I call the “crazy aunt in the attic.”

This tactic isn’t as useful in the presidential primaries, which are more focused on being “holier than the pope” when it comes to party orthodoxy. But the Republican and Democratic nominees, whoever they turn out to be, will certainly seek out each other’s crazy aunts in the general election debates.

If they’re looking to brush up on how it’s done, they would do well to take notes on Wednesday night’s debate at a Las Vegas synagogue between the Republican Jewish Coalition’s Matt Brooks and J Street’s Jeremy Ben-Ami. Each managed to reveal a crazy aunt of the other, and in some cases to get him to publicly dance with her.

The RJC and J Street have gunned for each other almost since Ben-Ami founded his liberal Israel advocacy group in 2008; he’s now the president. But Wednesday was the first time the Jewish leaders have faced off, and both brought their A game.

The first crazy aunt of the night was introduced by Brooks, the RJC’s executive director. Jon Ralston, the doyen of Nevada political reporters who was moderating, asked Brooks if he agreed with the notion peddled by billionaire casino magnate Sheldon Adelson, a major RJC founder, that the Palestinians are an “invented people.”

Brooks started out by saying Adelson doesn’t “hurt” the prospects for peace by promoting his view, but then went ahead and bear-hugged the position, saying, “Up until 1948, there never was a Palestinian people.”

In fact, the Palestinians were defining themselves as such for at least decades before 1948. Realizing that Brooks had cracked the attic door, Ben-Ami pushed.

“So Matt, who were the people who lived in the land of Palestine when it was called Palestine?”

“So we’ll agree they’re Arabs, they’re not an invented people, they lived in Palestine when my great-grandparents arrived in the first year of the First Aliyah,” he said.

Later, Brooks tried to get Ben-Ami to own relationships with anti-Israel groups like Students for Justice in Palestine. Ben-Ami answered that J Street does not coordinate with such groups on policy, and that what Brooks was citing were instances where J Street agreed to debate SJP and others like it in an effort to counter anti-Israel activism on campus.

“Believe, me we are at the top of the list of groups SJP does not like in the world,” Ben-Ami said.

When Ralston stepped in and asked Brooks whether he thought it was OK to block anti-Israel groups from campuses, Brooks said yes, “shut them down,” and the First Amendment “only goes so far.”

“What are your limits on the First Amendment?” Ben-Ami interjected.

There is a deep-rooted tradition among Jews of putting non-believers in herem, banishing them, never engaging with them. But banishment only makes sense in the Old World context of the Jewish quest for survival against all odds. In a free society, where the prevailing belief about extreme beliefs is that the best way to stop them is to expose them to the marketplace of ideas, shutting down speech becomes a crazy aunt.

Ben-Ami’s crazy aunt moment came in direct response to Brooks. After a couple of aborted probes (Sorry, Ben-Ami was never going to praise Neville Chamberlain), Brooks found what he was looking for.

“Who is the only prime minister in Israel to have done a settlement freeze?” Brooks asked.

Ben-Ami hemmed and hawed, allowing Brooks to answer the question himself. “Prime Minister Netanyahu,” Brooks said, correctly noting that the prime minister had paid a political price for deferring to President Barack Obama on the matter.

Ben-Ami went on the dismiss the freeze as inadequate, which is beside the point Brooks was making: Netanyahu, at least in one respect, has gone farther than any other Israeli leader in trying to get the Palestinians to the negotiating table.

The smart reply for Ben-Ami would have been to immediately give Netanyahu credit for the freeze before following up with the “but he could have done more” megillah.

Ben-Ami’s inability to praise Netanyahu exposed a crazy aunt hiding in many Jewish leftist attics: A visceral dislike for Netanyahu that is shocking to the Jewish mainstream. Although Netanyahu has real differences with the left on the status of the West Bank, he really was the only prime minister to freeze settlement — and he’s Israel’s elected leader.

Ben-Ami tried to make Donald Trump another crazy aunt for Brooks. I’m not sure he succeeded, because while Brooks didn’t directly say the RJC wouldn’t back the Republican presidential front-runner, he was able to note that the group had in the past repudiated less than savory Republicans, like Pat Buchanan.

That led to my favorite moment — the crazy billionaire aunt dance party — a supremely weird moment in an otherwise substantive and engaging debate. Ralston asked each leader about his major funders.

“You have your billionaires, we have our billionaire,” Ben-Ami said, acknowledging the support of George Soros, the hedge fund philanthropist and major Democratic funder who has become a bogey man for the right.

“I would take my billionaire over your billionaire any day,” Brooks said, acknowledging his Adelson connection and earning applause with the hometown crowd.

Retorted Brooks: “I would take my billionaire — and — his — wife over your billionaire any day.”

Ralston, thankfully, stepped in before Ben-Ami and Brooks were able to invoke extended families.