These Orthodox Jews use karate to defend the faith 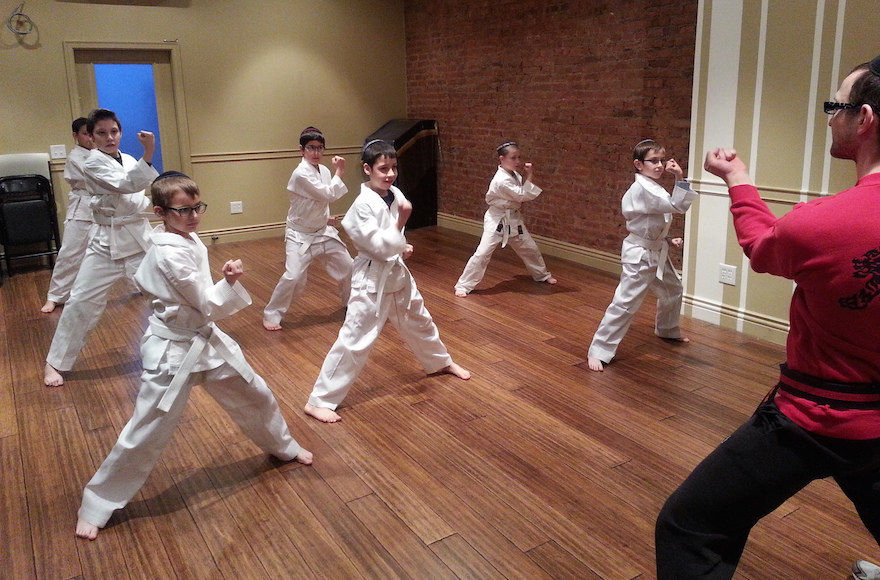 NEW YORK (JTA) — On a recent Sunday evening at a Jewish center in Brooklyn’s Midwood section, dozens of boys and men — ages 5 to 40-something — practice their kicks, strikes and jabs. They are clad in the usual all-white uniform, tied at their middles with cloth belts — mostly white, but some yellows and greens, too.

As is traditional martial-arts fashion, their feet are bare. But their heads are not — most are covered with black velvet yarmulkes. Some have curly payes hanging underneath.

At the head of the class is Mordechai Genut, a third-degree black belt and founder of Frum Karate, a class geared toward Orthodox, even Hasidic, Jews.

While “regular” karate classes often include rituals like bowing in honor of ancestors or burning incense as a gift to the gods, Genut removes any and all “avodah zarah” — foreign worship — aspects from the practice.

His goal: To help members of his community train their minds, bodies and spirits.

READ: For Jewish boxer ‘The White Tiger,’ toughness is a birthright

“We try and focus on physical exercise and relaxation, and we use martial arts as a vehicle to connect to God,” Genut says. “And we remove anything that’s contradictory to the Torah.”

Genut is a karate master in the Tora Dojo system (the name is a play on tora, the Japanese word for tiger, and the Torah; a dojo is a school of martial arts). The system was founded in 1967 with a mission to teach martial arts to the Jewish community.

Though his class is geared to religious Jews, Genut recognizes that some who lean more conservative may be turned off initially, try as they might to live strictly according to the Torah and stay away from secular society.

“The word karate can be a big no-no because it’s associated with fighting,” he says. “I understand that. But the truth is we see in the Torah many places where God says that you should protect yourself.”

In addition to running Frum Karate, Genut is also a licensed acupuncturist and expert on Qi Gong meditative breathing.

And though often associated with Eastern religions, meditation doesn’t contradict Judaism, says Genut, pointing in particular to the works of Rabbi Aryeh Kaplan, a 20th-century rabbi and kabbalist who wrote extensively on meditation. 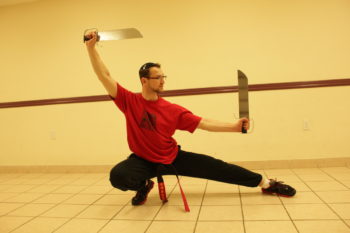 Genut has learned much from Eastern practices, but is able to sift through them to borrow aspects with which he feels comfortable as an Orthodox Jew.

“Everybody has the same body and same internal energy,” he says. “The only thing that’s different is the philosophy. I don’t need to be able to believe in Buddha to do these things.”

Genut began practicing martial arts as a teen in Brooklyn after some near-violent, anti-Semitic-tinged incidents in his neighborhood. Upon earning his black belt, Genut was given a Japanese name, as is standard: Jian Guo, meaning “to invigorate a nation.”

Through his role as a teacher, Genut is trying to do just that — though to his students he’s now known as Sifu Mordechai, which translates into “master.”

And though it may sound counterintuitive, Genut stresses the importance of avoiding violence to his pupils.

“If, Chas Ve’shalom [God forbid], someone is coming after you, you run away,” Genut told the younger of his two classes, which are split between 5- to 11-year-olds and 12 and up. He also teaches safety tips, like not having yarmulkes embroidered with their names, lest strangers fake familiarity with kids. (It’s a classic police tip, though usually applied to backpacks.)

“I have no shame in running away from a situation,” chimes in Jack Newman, a fifth-degree black belt who has been involved in Tora Dojo since the early 1980s and came to help Genut with his classes that Sunday night.

“But sometimes you can’t run away. In that case, you have the knowledge you get from your sensei,” says Newman, using the Japanese word for martial arts teacher. Newman credits his karate practice for helping him stay sane during his 30-plus years on Wall Street.

The recent rash of stabbings in Israel, along with hate crimes around the world targeting Jewish people, have made it even more important for members of the religious community to have knowledge of self defense, Genut and Newman add.

“The problem in religious communities is that there’s not enough education on self-defense,” Newman says. “Because of what’s happening now, in Israel and here, the yeshivas on every level should have some sort of program to show people the essence of how to protect themselves.”

A woman named Orlit is among several wig-wearing mothers who have brought their sons to the Sunday-night class. One of her sons has ADHD, “and for him it’s about fitness and focus,” she says. Another son, who is in the older class, gets nervous on the streets in their Flatbush neighborhood.

“I want him to be more confident,” she says.

Moishe Blumenthal, who is waiting for his son to finish class, says he appreciates the activity — mostly for the exercise, but also for the discipline. While he describes his son’s school as “yeshivish,” he says he suspects some Hasidic people might not be interested in the class for fear that it’s too far away from the world of religious learning.

“Though the fact that girls and boys are separate definitely helps,” he adds.

Earlier this month, Genut launched the first separate — but concurrent — class for women and girls in the same location, which is run by Sensei Ellen, a female first-degree black belt. (Orlit says she’ll consider sending her girls there, too).

While religious women often take female-only exercise classes like Zumba or kickboxing, Genut wanted women to have an opportunity to hone karate’s concentration and focus, he says.

And as someone who also organizes self-defense seminars for women, he also sees the importance in teaching frum women — and all women for that matter — how to protect themselves and avoid becoming victimized.

One Hasidic man, typing at his laptop while his 9-year-old son practices his kicks, jabs and bows, says Frum Karate has become a regular routine for them.