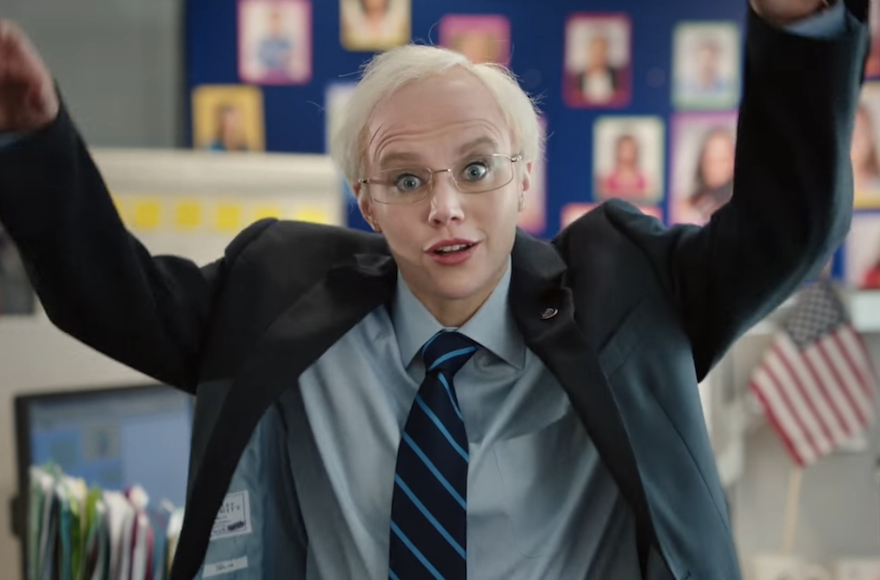 (JTA) — “Saturday Night Live” satirized Hillary Clinton’s campaign by having her turn into her Democratic rival, Sen. Bernie Sanders, and depicting the candidate as claiming she is “the biggest outsider Jew in the race.”

The parody ad broadcast Saturday on NBC took aim at two of Clinton’s perceived weaknesses: A record of what her critics say is one of shifting positions, and her losing younger voters to Sanders, I-Vt., who is mounting a surprisingly strong challenge to become the Democratic presidential nominee.

In the satirical ad, Kate McKinnon, the troupe member who impersonates Clinton, begins to pronounce words like “billionaire” in Sanders’ New York baritone, changes into a baggy suit, talks about her boyhood in Brooklyn and finally says: “Thank you millennials for lending your support to the biggest outsider Jew in the race.”

Also featured on the show was an interview with Larry David, the comic who has played Sanders in “SNL” guest appearances this season.

“My message is resonating with a very diverse group of white people, and I’ve got supporters of all ages, 18-year-olds and 19-year-olds,” David said as Sanders.

Asked why blacks aren’t voting for him, he responded: “Probably because I look like someone who at some point told them, ‘Get out of my store.'”

David as Sanders also explained why he hasn’t been campaigning in Florida, one of five states running primaries on Tuesday.

“Can you blame me? Who wants to spend time in Florida?” he asked. “The only reason you go to Florida is if your sister calls and says, ‘Mom’s dead, you got to go to Florida.’”