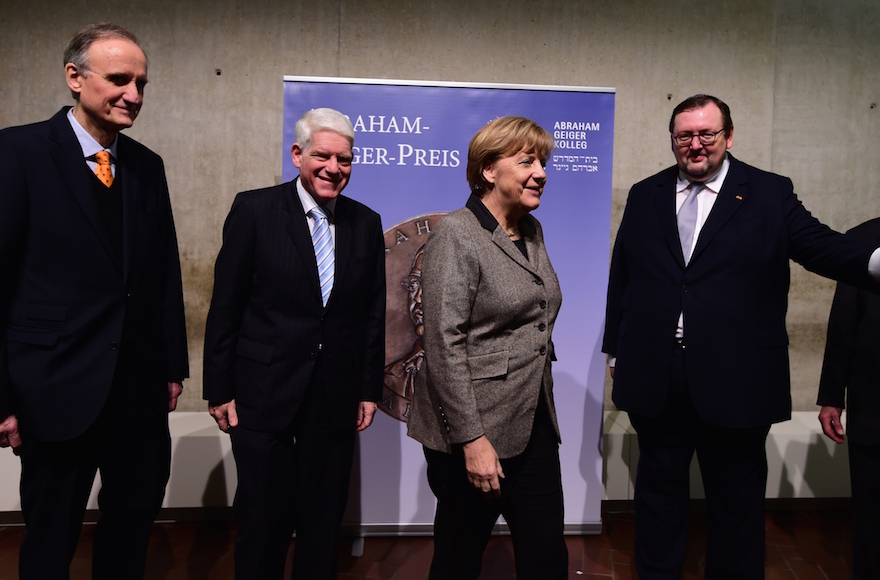 German Chancellor Angela Merkel, center, and President of the Central Council of Jews in Germany Josef Schuster, to her left, meeting at the Jewish Museum in Berlin, Germany, Dec. 2, 2015/ (John MacDougall/AFP/Getty Images)
Advertisement

BERLIN (JTA) — Anti-Semitism in Germany, whether from natives or refugees, must be confronted by the government and civil society together, German Chancellor Angela Merkel said.

Speaking Monday to more than 100 legislators from some 40 countries gathered in Berlin for the third Inter-Parliamentary Coalition for Combating Anti-Semitism, Merkel also said that Jews must feel free to speak up when they fear anti-Semitism — and they must be received with sympathy and concern.

Whether it is hate-filled criticism of Israel, vandalism of cemeteries or synagogues, “Anti-Semitism and other prejudices have no place in our society,” Merkel said.

The chancellor also defended the president of the Central Council of Jews in Germany, Josef Schuster, who she said has been harshly criticized for expressing fears about anti-Semitism among new refugees from Muslim lands. More than 1 million people have sought asylum in Germany in the past year.

“It is perfectly legitimate for someone to share his concern,” Merkel said, noting that many refugees “have grown up with certain stereotypes.”

Merkel commended the conference organizers for addressing anti-Semitism in sports, in the Internet and on the street.

“If gravestones are defaced, then our country itself is defaced. If synagogues are vandalized, this shakes the foundations of our free society,” Merkel said. And demonstrators who call for the destruction of Israel are simply “giving vent to hatred of Jews.” In so doing, they “abuse the fundamental rights in our country to freedom of association and expression.”

Fighting all manifestations of anti-Semitism and hate is the “joint role of government and civil society.”