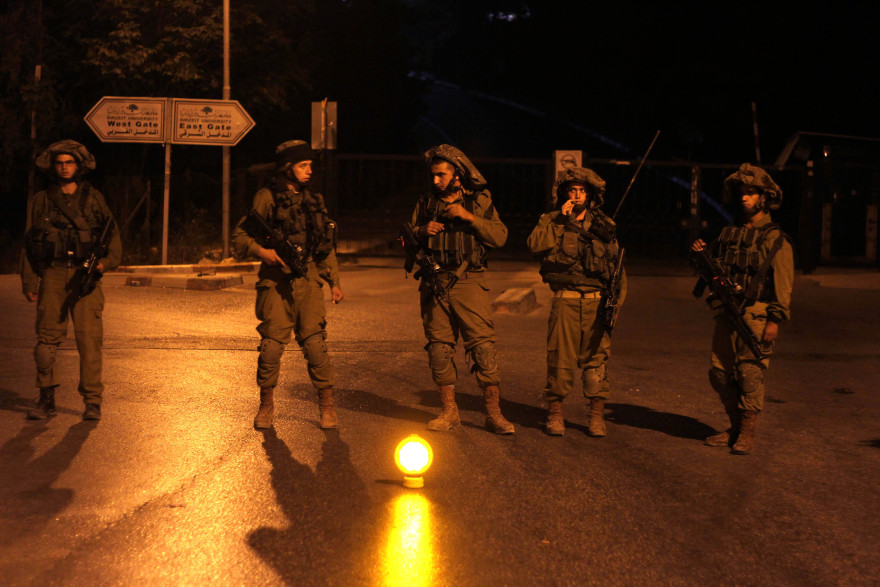 Israeli soldiers patrol at Birzeit University, on the outskirts of Ramallah in the West Bank during an operation on June 19, 2014. Israeli forces broadened the search for three teenagers believed kidnapped by Palestinian militants and imposed a tight closure on the town. (Issam Rimawi/Flash 90)
Advertisement

(JTA) — In recent secret Israeli-Palestinian talks first reported in Haaretz, the Palestinian Authority turned down an Israeli offer to stop military operations in the West Bank cities of Ramallah and Jericho, saying the proposal did not go far enough.

According to the Times of Israel, Israeli negotiators in late February offered to do a trial pullout from the two West Bank cities, but the P.A. said it wanted the Israel Defense Forces to cease activities in all of Area A — the section of the West Bank that under the 1993 Oslo Accords is officially under P.A. control.

Citing unidentified senior Israeli officials, Haaretz reported that talks are “currently stuck but not dead and could resume.”

Citing unnamed Palestinian security sources, the Times of Israel said P.A. officials had demanded that Israel present concrete steps detailing when it would stop all military activities in the area.

Although Area A is supposed to be under exclusive Palestinian control, Israeli forces since 2002 have frequently entered the area to arrest terror suspects and conduct other operations. According to Haaretz, the IDF operates in the area “without restrictions almost daily.”

Although there have been no peace talks since a United States-brokered effort collapsed in April 2014, Israeli and Palestinian Authority officials have continued to coordinate on security. The coordination has been endangered, according to Palestinian officials cited anonymously by the Times of Israel, by the Israeli army’s continued incursions into Area A, something that damages the P.A.’s reputation among Palestinians living in the area.

According to the Times of Israel, the sources said Israeli negotiators were focused only on improving the security situation, whereas the Palestinians wanted to advance to a final-status agreement.

Haaretz reported that another reason Palestinians objected to the proposal was that they believed it would require the P.A. to publicly acknowledge its approval of the IDF entering parts of Area A, which it has not done.