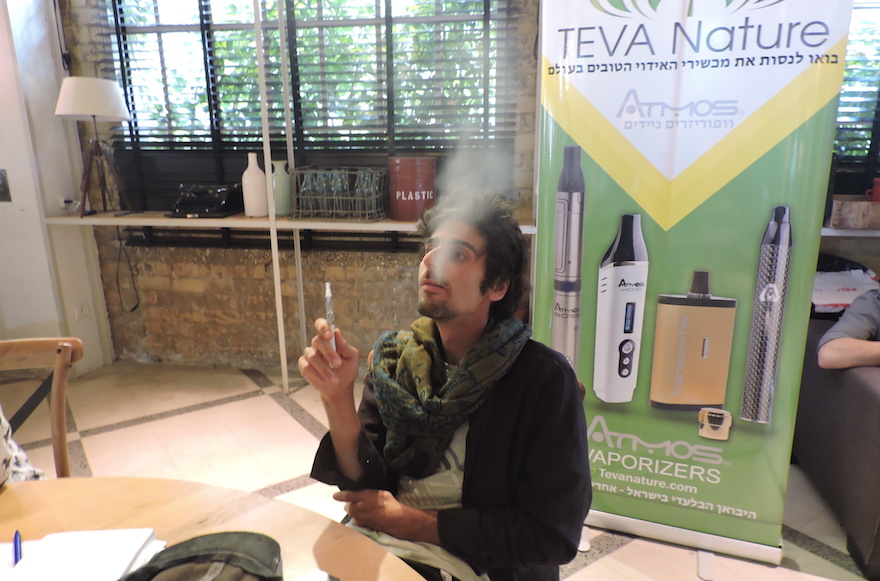 TEL AVIV (JTA) – He was chilling out in the corner, tipped back in his chair, newsboy cap askew on his head, a grin on his face and smoke gently wafting from his mouth.

Finally, I thought, I’ve found someone smoking pot at a cannabis conference.

CannaTech, an international conference held for the first time last week at venues in Tel Aviv and Jerusalem, featured seminars on everything from the global cannabis investment market to quality control in commercial cannabis cultivation. There were vendors showcasing the latest growing technologies and unique handmade smoking devices. One guy was even touting a product to alleviate the dry-mouth feeling stoners are all too familiar with.

But one thing you didn’t find at the conference was actual marijuana. Which was kind of the point. Aside from the fact that recreational marijuana remains illegal in Israel, conference organizers want marijuana to be taken seriously as medicine, not something smoked through a hollowed-out apple on a torn couch while eating Cocoa Pebbles.

The conference was explicitly about developing lawful ways to widen medicinal use of marijuana, ease its access and, perhaps most important, destigmatize it. Recreational use was barely discussed, and the word “legalization” didn’t show up anywhere on the conference program.

“There should be complete separation between recreational use and medical use,” Raphael Mechoulam, a chemistry professor at Hebrew University and Israel’s foremost medical cannabis researcher, told reporters at the conference. “Recreational use is based on what the people feel should be done. Medical use has to go by what the medical establishment says needs to be done.”

Despite its subject matter, CannaTech was much like any other Israeli technology gathering – guys in jackets and ties touting innovative products. A few times, the smell of pot wafted through the hall, but I could never find its source. During the first day’s closing event, in which entrepreneurs pitched their startups to the crowd, conference attendees sat in front of bags of snacks and consumed an intoxicant — but it was whiskey, not marijuana. 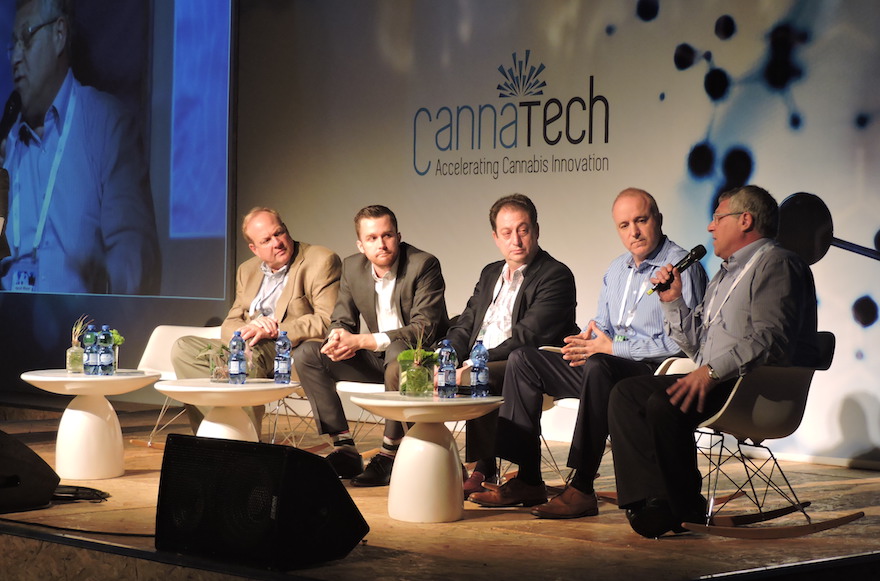 The Israeli cannabis tech accelerator that ran the conference, iCan, claims about 1 million Israelis use marijuana – nearly one-eighth of the population. But there’s no significant movement toward legalization of recreational use here, and even medical marijuana, which is legal, can be hard to come by. It’s only sold in specialized dispensaries, and physicians can only prescribe it after the patient has tried a range of less controversial medications.

“The major roadblock in Israel is patient access to cannabis,” said iCan founder Saul Kaye. “It’s considered a last-line therapy. There’s a lot of pain. There’s patients who are suffering.”

The process is about to get easier with new regulations moving through the Knesset that would allow more companies to grow medical marijuana and any pharmacy to stock it. Israel also permits clinical testing of medical marijuana, which along with Israel’s reputation as a high-tech hotspot, has helped make the country a leader in cannabis technology.

Dozens of Israeli startups are now focused on cannabis. One company, Cannabliss, makes marijuana drops and pills as alternatives to smoking. Another venture, DryGAir, makes greenhouse dehumidifiers especially suited to marijuana growing. Eybna specializes in strains of marijuana that have the smell and taste of the plant but no narcotic effect when smoked.

Others veered a little closer to what you might find at your neighborhood smoke shop – or might soon, if some of the products wind up in wide distribution. In addition to running iCan, Kaye has also developed a product called Cottonmouth, an oral spray designed to relieve dry mouth for pot smokers.

And then there was the guy in the newsboy cap. Arnon Tamir is the CEO of Teva Nature, which imports and sells marijuana vaporizers and e-cigarettes. The company’s stand looked like a high-tech version of a smoke shop display case and Tamir, his loose clothing hanging from his lanky frame and smoke pouring from his mouth, appeared to be enjoying himself some reefer.

Tamir offered me a hit, which I declined, telling him I’d like to stay sober (and within the bounds of the law) for the rest of the conference. Smiling, he gently corrected me.

“This is not cannabis,” he told me between puffs, explaining that it was a marijuana extract removed of its intoxicating compounds. “It’s, like, only the essential oils from the ganja.”